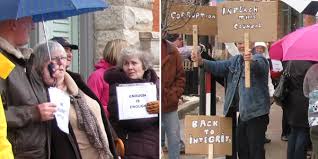 Forty-eight months ago a very small group of disgruntled, angry residents – some with burning ambition to take a seat on council themselves – complained to the OPP, allegedly about decisions made by the previous council. Decisions and people this group didn’t like. Decisions they thought – without any proof – were shady. People they thought – again without any proof – were corrupt.

Both conspiracy theories have long since been proved wrong. But they damaged reputations and lives, while others used the fallout to further their own dark goals. All done without the slightest twinge of guilt.

It worked. People were fooled. But not now. After four years, and no OPP report, people realize they were hoaxed, and many think they know by whom.

The OPP must have been mortified at having to investigate a clearly politically-motivated, baseless complaint. So much so that shortly after the flurry of bad publicity, the “investigation” vanished, as if the police were too embarrassed to mention it again.  It hasn’t resurfaced.

The law says the OPP is required to investigate any complaint. The police talked to people. They examined bank accounts, businesses, connections. They interviewed town staff and collected records.

In the past four years, nothing has been uncovered to incriminate anyone.

That “something” may have been the complainants themselves for malicious intentions to do criminal mischief. For costing the taxpayer hundreds of thousands, maybe millions of dollars to pursue their personal agendas and vendettas. But no one was charged.

By now you understand this was just dirty, deceitful politics. By now you know there was never anything behind the allegations that tarnished the good reputation of this town, some of our best politicians and civil servants.

But why? Is there more to it than the self-evident maliciousness, spite and envy? Of course.

Back in 2013, some people were angry because the former council chose not to spend public money to build an unaffordable, $35 million recreation centre – the ‘Taj Mahal’ at Central Park – and turn its operation over to the YMCA. Instead, council chose a better answer to the community’s recreational needs: a new arena and a covered, year-round pool, both town owned and operated, and done without raising taxes.

Others, I’ve since been told, were angry that the town couldn’t bail out the private investors who funded an ill-conceived sports bubble at the Pretty River Academy, leased and erected without first developing a sound business plan for its sustainability, and without first asking the town if it would help (it couldn’t because of provincial legislation and standards).

Simply because someone didn’t like what council does or way a vote went, didn’t understand the procedures or the legislation, doesn’t mean what council did was wrong, illegal, immoral or improper.

Everything done by the former council and its staff was above-board, open and transparent, completely legal and democratic, overseen by competent staff and lawyers. Discussions were all held in public session and all votes were cast in the open.

But instead of taking responsibility for their perceived misfortune, these people blamed others. They began a vendetta against those staff and politicians who participated in the decisions (and I believe is the reason behind the ongoing assault on Collus/Powerstream).

Some managed to gull the CBC into reporting on their allegations in a sensationalist way, without actually confirming them with the police (it has since been suggested that they contrived to “bump into” the reporter on holiday at a local ski club and convince him to report on their story).

Not one single thing has been reported by police to support a single one of the lies, rumours, and allegations.

Four years have gone by. It’s time for the OPP to give closure: let people clear their names and restore their reputation.

Collingwood deserves the truth. We deserve for those implicated to be exonerated and the perpetrators of this hoax to be exposed.