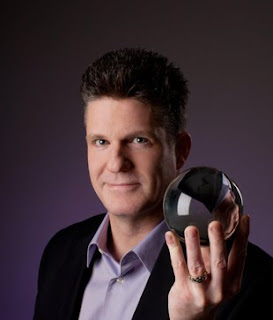 I had barely finished writing my post on the failed 2013 predictions of the self-described “psychics” and “clairvoyants” who are the media darlings du jour, when the sorry lot of charlatans published their latest lot of flim-flammery and codswallop: predictions for 2014.

As usual, the list of “predictions” contains a lot of vague or general statements in which an unidentified “someone” is involved – you’d think that a real clairvoyant would be able to see the name of the person, and provide a location and a date.

But that would spoil the effect – afterwards they can claim they predicted the event rather than made a vague and irrelevant statement.

It’s a con game as old as history. And some of it is just plain silly.

Like this: “Garlic is in the news.” Huh? How in the “news?” In the food section of the Star? On a supermarket tabloid page? On sale in the local grocery store flyer? When will it be “in the news”? What sort of “psychic” predicts vegetables?

Remember, these are the same folks who failed to predict the former pope resigning and the election of Pope Francis. And Lou Reed’s death. Nelson Mandela’s death. James Gandolfini’s Jean Stapleton’s and Margaret Thatcher’s death. The meteor exploding over the Russian city of Chelyabinsk. Typhoon Haiyan “Yolanda”, one of the strongest tropical cyclones on record.Lac Megantic train derailment. Anything about Rob Ford.

Well, some of them now claim they predicted some and even all of these, but their predictions are curiously absent in the roundup of 2013 predictions from so-called “psychics”…

But what are minor events of this stature, anyway when we had these headline-stealing predictions happen in 2013: Okay, so none of them happened. Some of which we can be thankful for: Justin Bieber in movies and mesh shirts, for two.

But solar flares as a “fad”? Like tattoos? You have your very own? or maybe get one named after you? Hey, did you hear? Solar Flare Ian just blasted towards the Earth and is gonna disrupt all telecommunications for the next 48 hours… and by the way, Mexico City is still standing. So is New York.

And Tom Cruise? Still mired in the cult.

Families are still hunting the elusive “dinner table.” Like the hunt for El Dorado… hint: look in the dining room or the kitchen for it.

And if you’ve never read the Hunting of the Snark, you really must: it describes all too well the hunt for credible “psychics” … the Snark is a boojum, just like “psychics” are charlatans.

The almost complete failure of their past predictions hasn’t stopped the same zany gang of con artists from making a whole new set of predictions for 2014 which include equally nonsensical notions (albeit present with a few editorial comments):

And then there’s the list of “paranormal” events. None of these ever happen because they’re all imaginary. UFOs, Atlantis, ghosts, They put this stuff in because it appeals to the hard-of-thinking and conspiracy theorists who expect it. I mean, that’s the association: Psychics and UFOs. Paranormal and conspiracy theory. They go together like peanut butter and ginger marmalade, right?

What’s sad – truly tragic in this modern era – is that there are simple folks who will be still gullible to this medieval nonsense despite our technological and educational advancements. All I say is please, people, if you’re tempted by this dreck, if you think there’s some credibility here, use your noggins for something more than holding your ball ca. Think. Don’t be fooled. It’s all a scam.*

* Okay, to be fair, people fall for all sorts of hoaxes, scams, con games and ruses, not just fake psychics and faux clairvoyants. Like crop circles. Bigfoot (the hoax still being perpetuated on us by Dyer, says Time) UFOs. Creationism and more. And that doesn’t even begin to cover the wide and wild array of conspiracy theories, from local to international topics.