Monday night, I asked for a staff report on covering our lawn bowling rinks, and making it into a year-round facility for Collingwood.

This facility would provide recreational opportunities for seniors and older adults. It could include other sports like horseshoes, shuffleboard and croquet. Perhaps badminton and a walking area (since we will lose our mall and its opportunities for indoor walking).

Right now, our lawn bowling site is dependent on the weather, and vulnerable to inclement changes, rain, heat, etc. The grass requires considerable maintenance and care to meet the sport’s standards, too. Covering it and moving to artificial turf would make the sport available all year, in all kinds of weather, as well as create a new venue for events and activities.

The new facility could be managed in conjunction with the current lawn bowling club, and perhaps other organizations, especially if we create more recreational opportunities inside. The model could be like the cooperative one we already have with the Curling Club. It could be a very popular facility. 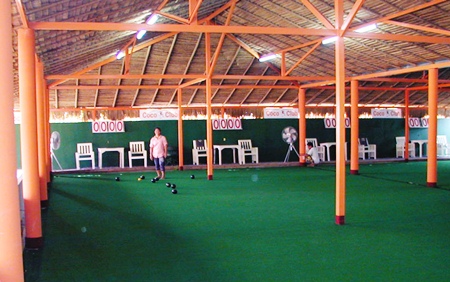 As one Australian newspaper announced:

The Pattaya / Banglamung district now has at its disposal a new indoor lawn bowls arena with a synthetic Astra turf surface. It is my belief that this is probably the first full artificial indoor bowls facility in Thailand. It is officially being opened with a private party on the 15th July.

There is also indoor lawn bowling in the UK. I’m not sure from the photos if they are using natural or artificial turf, but I suspect the latter. The lawnbowls.com site notes:

You have to come to the UK to see the lawn bowls game played in full size permanent Indoor greens of anything from one to 12 rinks, the norm being 6 or 8. Although these larger Indoor’s are beginning to be erected all over the World, there are 333 at the time of writing in the UK.

Some of the comments about indoor lawn bowls online include this:

As Indoor Lawn Bowls Champion, Andy Thomson, probably once said: “there are some key advantages to indoor bowls…”

This rang true last night when, after a weekend of sunshine, the heavens opened and Melbourne was drenched in rain.

With raincoats on and bowls in hand (and a beer in the other) we took to the astroturf. At the night progressed, the pursuit of witty sledges seemed to take priority of the pursuit of good bowling. The competition was cut short as the rain intensified (just as we were poised to strike and claim victory).

Lawn bowling is a popular sport for all ages in many countries, including the UK and Australia. Here in Canada, it tends to be played by seniors, but that’s not its heritage.

That’s odd because related sports bowling and curling are not regarded as seniors’ sports. Perhaps an indoor facility would encourage younger players to sign up. You can read an amusing story about a young woman’s experience at lawn bowling in Toronto. I have only had the experience playing bowls twice, but both times was amazed by the skill of the older players. Perhaps I need to sign up next year so I can hone what few motor skills I still have.

Adults of any age are welcome to join the club. The club is seeking younger adults for membership.

The Ontario Lawn Bowls Association already has a manual for indoor bowling, and there are already indoor bowls facilities in Ontario (here’s one in Richmond Hill and another in Newmarket). So it’s not a new idea. Just not one raised in Collingwood (as far as I know).

The sport has a long pedigree. According to Wikipedia, bowls,

…has been traced certainly to the 13th century, and conjecturally to the 12th… In 1864 William Wallace Mitchell (1803–1884), a Glasgow Cotton Merchant, published his “Manual of Bowls Playing” following his work as the secretary formed in 1849 by Scottish bowling clubs which became the basis of the rules of the modern game. Young Mitchell was only 11 when he played on Kilmarnock Bowling green, the oldest club in Scotland, instituted in 1740.
The patenting of the first lawn mower in 1830, in Britain, is strongly believed to have been the catalyst, world-wide, for the preparation of modern-style greens, sporting ovals, playing fields, pitches, grass courts, etc. This is turn led to the codification of modern rules for many sports, including lawn bowls, most football codes, lawn tennis and others.
National Bowling Associations were established in the late 1800s. In the then Victorian Colony (now State of Victoria in Australia), the (Royal) Victorian Bowling Association was formed in 1880 and The Scottish Bowling Association was established in 1892, although there had been a failed attempt in 1848 by 200 Scottish clubs.
Today the sport is played in over 40 countries with more than 50 member national authorities. The home of the modern game is still Scotland…

Few sports are more ancient than lawn bowling. It was played in 12th-Century England and by the time of Henry VIII had provoked such a riotous fever of ambling that even that riotous monarch put it down by law. First notable U. S. player was George Washington, who had a bowling green* at Mount Vernon.

The Santa Anita Lawn Bowling club is a bit more enthusiastic about the history:

Lawn bowling, or “bowling on the green,” is an outdoor game that has fascinated both young and old for centuries. The actual origin of the game is hidden in the haze of antiquity. We do, however, have authentic records of well over seven hundred years of bowling history.

Sculptured vases and ancient plaques show the game being played some four thousand years ago, and archaeologists have uncovered biased stone bowls from 5,000 B.C. which indicate our ancestors enjoyed the game of bowling more than seven thousand years ago.

When Caesar rules Rome, the game was known as “Bocce,” and the conquering Roman Legions may well have carried the game to Europe and the British Isles. By the thirteenth century, bowling had spread to France, Switzerland, Italy, Spain, Belgium, Germany, and England.

Bowling was so well established in England by 1299 A.D. that a group of players organized the Southhamptom Old Bowling Green Club, the oldest established bowling club in the world that is still active. The game became so popular in England and in France it was prohibited by law because archery, essential to the national defense, was being neglected. The French king, Charles IV, prohibited the game for the common people in 1319, and King Edward III issued a similar edict in England in 1361.

And the Palo Alto club adds this:

The history of bowls has been traced back to the ancient Egyptians. It is believed they played with stones – probably selecting the small round ones that weren’t any good for building pyramids with anyway. The English, of course, wanted to machine perfectly spherical ones from fine lumber they obtained from remote parts of the empire.

Until one day someone’s bowl split in two. And he put a simple knob to replace the broken half which lead him to immediately discover he could bowl curved shots and sneak around other bowls near the jack. Today all bowls have a certain built in bias.

In Italy it became Bocce Balls. In France it became Boile. In England it became Lawn Bowls or simply Bowling. In the USA it became ten pin bowling after someone lost the instructions and rules on the way over. But we do know Sir Francis Drake played bowls – and in one famous game – told his men not to worry – he would finish the game before taking up arms against the invaders.

There are many options for indoor play. This photo shows another use, apparently with mats that can be moved so the space can be used for other recreational activities and sports:

This also seems to be called “carpet bowls, as this site suggests. Zommershow.ca says:

There are many bowling clubs and organizations across Canada and many for indoor bowling.

Our new recreational facilities  are an inspiration  for what we can do with our other facilities. A covered lawn bowling pitch, with additional uses specifically aimed at seniors, would improve our standing as an age-friendly community and offer many extra opportunities for exercise, socializing and engagement. It could also develop a roster of younger players if schools get into the act and encourage student leagues and participation.

I look forward to the staff report to learn how viable this idea is, and what it might cost. Even if not an immediate priority, I believe we should investigate the options and engage the community in the debate.