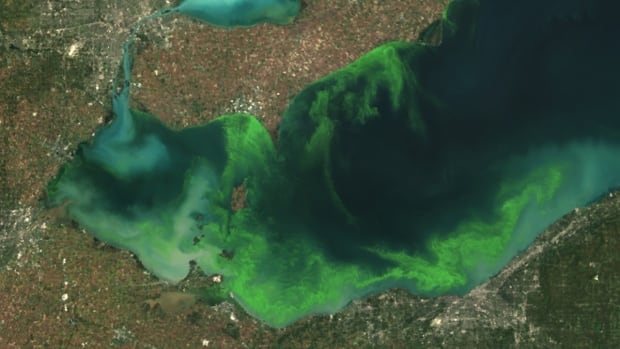 In 2014, Toledo experienced a water crisis that caused the city to issue a “do not use” warning for more than 500,000 residents. They had to rely on bottled water; boiling wasn’t safe because it further released toxins into the water.

That crisis was caused by unsafe levels of the toxin Microcystin in the city’s treated water. The toxin came from the unprecedented algal bloom in Lake Erie; a huge swath of the west end of the lake blossomed with the algae.

The algae were growing rapidly because of the increasingly high nutrient load in lakes and streams. In particular: phosphorus. The bloom wasn’t as large as the 2011 giant that covered 5,000 sq. kilometers of the lake, but it was more deadly.

Not all algae  – or, more properly, cyanobacteria – produce toxins. Many are benign and all play important roles in the environment. But those produced can cause illness and even be fatal, at least to animals. There are some 50 types of Microcystin, of which Microcystin-LR is the most common. And most dangerous: it causes severe and sometimes fatal liver damage.

In the past few months, oceanic algal blooms known as red tides have killed tens of thousands of fish off the coasts of Florida, Chile, China, Cambodia, and Vietnam. A 500-km bloom polluted one of Australia’s major rivers this spring.

Blooms occur when the water is warm enough and rich enough in nutrients – particularly phosphorus and nitrogen – for the microscopic, unicellular plants to multiply rapidly. Thanks to the global warming from climate change and the widespread use of commercial fertilizers, these are common conditions today. And the reports of algae blooms increases every year. Algal blooms have occurred across Ontario, in rivers and lakes, closing beaches to swimming and forcing residents to rely on bottled water until they dissipate.

In 2014, four lakes in the Sudbury region experienced blooms. In 2015 that number had climbed to ten.

Last summer, at Sudbury’s Ramsey Lake – a major source of the city’s drinking water and used for recreation – health officials warned people not to swim in or drink the lake’s water because of algal blooms.  In 2014, Sudbury initiated a comprehensive source-water protection plan.

The source water protection plan includes the stricter monitoring and inspection of septic systems. The storage of contaminants such as pesticides and manure will also be under heavier scrutiny.
Jessica Brunette is a water/wastewater bylaw compliance officer with the City of Sudbury. “We have inspectors working with the city of Greater Sudbury that will be going around and talking to property owners that are carrying out these activities on their property,” she said.

This spring, the city announced $2.3 million to study the algae in the area and try to figure out how to deal with it.

This week, speaking of algal blooms that have plagued Lake Bernard since late 2015, near Sunridge, officials in the North Bay-Parry Sound District Health Unit threw up their hands and told a public meeting that finding a source for the problem was outside their jurisdiction. In their presentation to council, high levels of phosphorus were discussed.

Last year, Lake St. Clair had severe algae blooms. South of the border, algal blooms have causes problems in the Chesapeake Bay and in Lake Champlain.

Algal blooms are increasingly common in our fresh water and are basically unstoppable once started. But they can be prevented or at least their size reduced by changes in what we put on the land and in our water. And that includes phosphorus.

Phosphorus and nitrogen in runoff waters from farms and in pollution from wastewater tends to accumulate in the ecosystems of inland waters and coastal regions. This stimulates the growth of algae and certain types of bacteria, altering coral reef and lake ecosystems and deteriorating water quality. These pollutants also create “dead zones” in the oceans, generally at the mouths of major rivers. In these regions, decomposing algae use up all of the dissolved oxygen in the water, creating vast areas that are practically devoid of all marine life. The number of dead zones identified has doubled ever 10 years since the 1960s, and by 2010 there were over 450.

But the real threat is from fertilizer: diammonium phosphate, a water-soluble ingredient in fertilizer that shows up in water testing.

Even when use is stopped, phosphorus accumulated in the landscape can continue to pollute water for decades.

Agricultural runoff is often identified as a prime source. But another source is urban runoff and stormwater: the phosphorus comes from extensive use of fertilizers on lawns and gardens, and on golf courses.

Land use and lawn care are putting our Great Lakes at risk, say experts.

To combat excess phosphorus in water supplies, laws have been in place since the 1970s to limit the nutrient load, but until recently many were not well enforced. Manitoba passed restrictions on fertilizers with phosphorus in 2008. In 2011, Manitoba launched tests of new technology to remove phosphorus from its lakes.

In 2010, New York State made it illegal to sell fertilizer with phosphorus in retail stores.

When faced with a serious threat to its water system, Sudbury passed a bylaw in 2011 making it illegal to sell or apply any fertilizer containing phosphorus. That included retaillers and garden centres.

It was the first municipality in Ontario to do so. Sudbury chose to exempt “…agricultural use, golf courses and newly laid grass seed or sod.”

All fertilizers show three numbers that list nitrogen-phosphorus-potassium content. in Sudbury, stores can only sell products with a zero in the middle. The city ran ads about “zero in the middle” products. Charles Ramcharan, a biology professor with Laurentian University’s School of the Environment, told the Sudbury Star:

When purchasing fertilizer, residents need to pay attention to “the middle number” on the bag, which refers to phosphate content. “You want to find the one that says zero,” Ramcharan said. “It’s not going to have phosphates, and it’s cheaper, too.”
At this time of year, if plants are already growing, fertilizer really isn’t necessary anyway, reasoned the professor.
“It’s expensive for you, it’s not used by the lawn and it’s bad for the lake,” he said.

Sudbury officials acknowledged that the ban would not significantly lower the nutrient loading into area lakes, but wanted to pass it to help education and public awareness of the problem. It would “…signal the city’s intent to protect lake water quality and send a message that it’s a community- wide responsibility that doesn’t end with restricting fertilizer use.”

Collingwood is a waterfront community on the Great Lakes. Our water comes from an intake in the harbour. There are streams and rivers that run through residential areas of town that carry runoff into or near the harbour. Collingwood is recognized as a member on the Great Lakes’ councils. We are in the Nottawasaga Valley floodplain and watershed. We have the last provincially-significant wetland (Silver Creek) on the south shore of Georgian Bay within our boundaries.

Why have we not passed a similar bylaw? Why do we not restrict retail sales and use of potentially problematic products containing phosphorus? Why doesn’t Collingwood have an educational campaign about runoff, about nutrient loading, about phosphorus and about protecting our own water quality? Why are we silent on this important issue?

I have no answers. I can only point out that this council removed the experienced professionals, staff and experts who once sat on the water utility board – the group that successfully ran our water utility for many years and could have best lobbied for such a bylaw – and replaced them with a group of inexperienced, neophyte councillors and non-technical administrative staff. They then separated the water utility from its previous mutually-supportive corporate relationship with Collus/Powerstream (which it now is attempting to destroy) and put the management under the town’s administration.

This change was made in defiance of the widely-hailed findings in the 2005 provincial Watertight Report by the Ministry of Public Infrastructure Renewal’s Water Strategy Expert Panel, which noted:

Governance must be strong and effective. Water and wastewater systems are becoming increasingly complex, and in most cases – especially after consolidation into larger units – a municipally-owned corporation would be the best vehicle to own these assets. Those who oversee them, whether drawn from municipal councils or private life, need to understand a wide range of issues that are often specific to utility operations. For transparency, the finances of water services should be kept separate from those of their municipal owners…

Of the available models, the Panel therefore believes that the corporatized utility model, where the municipality owns the corporation, offers the greatest benefits in terms of governance, transparency, financial sustainability and accountability…
Municipal corporations, which the Panel favours for delivering water services, should be governed by a board with a majority of private citizens…
Recommendation 5.2:
At least two-thirds of the directors of the board of a water  service should be drawn from private life, with any remainder consisting of appointments from municipal council.
Where municipal council governs the system, an advisory board should be created to provide public guidance and comment on plans, performance and accountability.

Instead, for strictly ideological reasons, our council went backwards and replaced its successful corporate model with a less open, less transparent and less accountable model with a board filled solely with inexperienced members of council advised by inexperienced administrative staff.

Collingwood deserves better. Our lives depend on having clean, safe water.