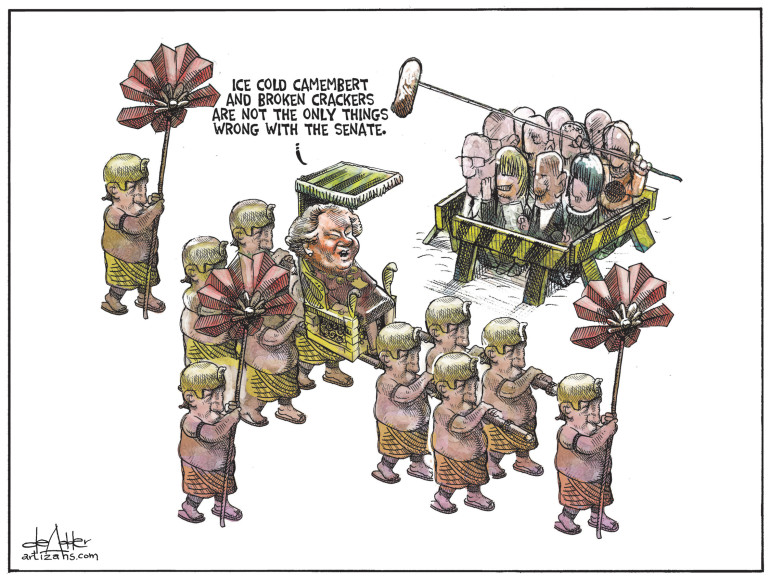 Conservative Senator Nancy Ruth made comments last week about how awful it is to eat normal airplane food as an excuse why she billed more sumptuous meals to her taxpayer-funded expense account. Cold camembert and broken crackers, she whined, were not acceptable breakfast fare for the likes of a Senator. As the NatPost quoted her:

“There are a couple of times when my assistant put in for a breakfast when I was on a plane, and they say I should have not claimed because I should have eaten that breakfast… Those breakfasts are pretty awful. If you want ice-cold Camembert with broken crackers, have it.”

Oh, how trying it is to be a Senator, having to dine on mere first-class fare at taxpayers’ expense. Her arrogance only made Canadians agonize more over how we really need to abolish or reform the patronage cesspit of our appointed Senate.

Her words also sparked a wave of Twitter and Facebook comments about the Senate’s entitlement and its ‘let-them-eat-cake’ mentality. Barbed editorials appeared in the media and social media. This comes at a time when Mike Duffy is on trial over the very issues Canadians abhor in the Senate: abuse of privilege and self-righteous entitlement.

It’s hell to serve your country. Just ask Senator Nancy Ruth, who often finds herself on early-morning flights, schlepping here and there to make the world a better place with nothing to sustain her but crappy airline food. “Those breakfasts are pretty awful,” she explained the other day. “… Ice-cold Camembert with broken crackers.”

But a sense of entitlement among our public officials – elected and appointed – is not limited to Ottawa. Snouts are in the trough at every level of government. Yes, even here: we have our own Senator Ruth.

Only this week, the Bloc Five (B5) on Collingwood Council (in a 5-4 vote) approved adding an additional $40,000 this term to Councillor Kathy Jeffrey’s expense account so she could campaign for a board position on the Federation of Canadian Municipalities (FCM), a national association of municipalities which holds its meetings and conferences from one end of Canada to the other, even in the Arctic.

She will dine all over the country at taxpayers’ expense while she pursues her political ambition to be queen of FCM.

Don’t forget that $40,000 is piled on top of her existing annual $4,000 expenses and her $22,000 salary. Why she can’t pay for her efforts out of that amount, or even out of her own pocket, I don’t know. After all, even without the $40K, she will receive more than $100,000 in salary and expenses from taxpayers this term (let’s not forget she was one of those who voted herself a raise this year, too!)

Now, I am all for our town’s membership in the Federation of Canadian Municipalities, but not for paying for any one of our elected part-time councillors to gallivant around the country on a champagne-and-caviar budget like Senator Ruth. That simply doesn’t strike me as the sort of accountable, ethical government that we were promised.

What do we, the taxpayers, get from anyone who gets elected to FCM’s board? Well, with what we get, and an additional $2 out of your own pocket, will get you a small coffee at Tim’s.

And why, you ask, would anyone even run for a position on the board when the Warden of the County is planning to run to represent the whole region? Wouldn’t it make sense to support the Warden’s candidacy instead, and save Collingwood taxpayers the $40,000?

That’s $40,000 of your money that could go into fixing sidewalks, improving parks, hosting events, helping charities, the hospital, or the animal shelter, or keeping our water rates from rising so drastically – it could go to something – ANYTHING – that benefitted the rest of us.

But no: the B5 told ratepayers to ‘eat cake’ – metaphorically speaking – and rewarded one of their own with a shower of funds from your pockets. The odour of entitlement here smells remarkable senatorial.

This comes after the CAO gave council a sky-is-falling picture of our financial status, and warned of dire consequences if council didn’t trim the town’s expenses (by which I assume he didn’t mean trimming staff’s 2.25% pay hike which this council passed…).

Yet the sense of entitlement must have overwhelmed their fear, because the Bloc Five voted to increase Councillor Jeffrey’s expenses. I suppose, it’s back to the days of l’etat c’est moi for some at the council table as we had in a prior term, it seems…

(And, after approving a seriously flawed budget process, council also approved a budget that most never bothered to glimpse in its totality. Yet, without knowing what they were actually approving, council  still approved increases in spending – and to your taxes and water rates. Only one of the nine – Councillor Lloyd – actually looked at the line-by-line costs and asked the tough questions. Since we expected this council to cave into staff demands, we’re not surprised, merely relieved at least one of them won’t be strong-armed into complacency and obedience…)

And on top of it, Councillor Jeffrey voted to reward herself with the free flights, hotels and meals that extra expense will buy… which in my opinion is ethically, morally and procedurally wrong. I believe she should have stepped away from the table when council debated something that directly affected her and no other member of council.

But perhaps my sense of integrity, accountability and ethical public service are a bit old-fashioned for the B5. Perhaps, too, someone will raise this with the Integrity Commissioner.