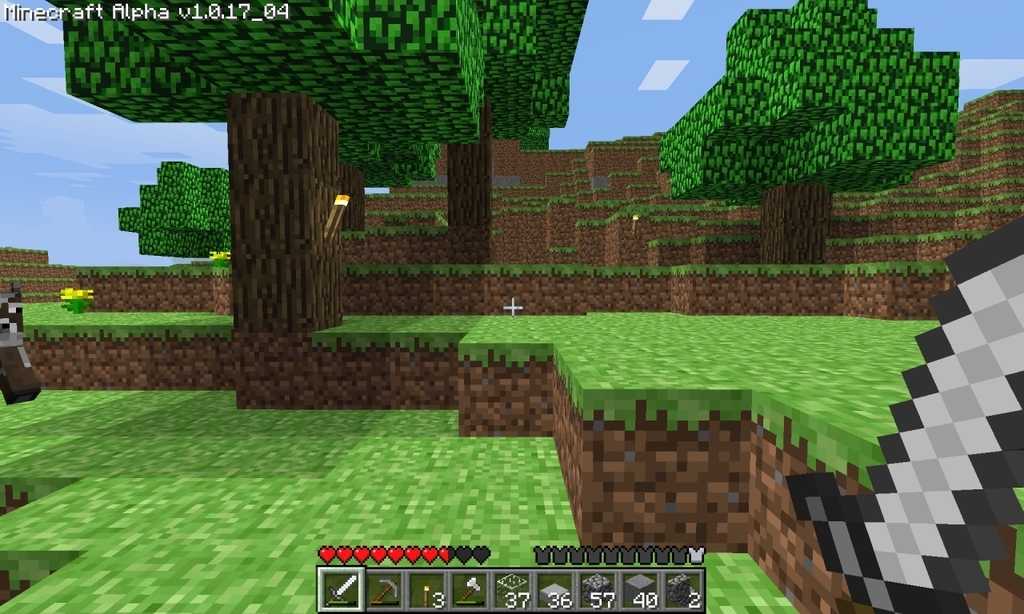 About an hour after I started playing Minecraft for the very first time, I died. As game experiences goes, that sucked. Not exactly a “thanks for your purchase” ingame welcoming message from Mojang

Not that I’m unaccustomed to dying. In most computer games I’ve died: Call of Duty, Medal of Honor, World of Tanks, World of Warcraft, Ghost Recon, Diablo, Borderlands, Left 4 Dead, even in Civilization. Dying is part of gaming.* But most of the time, I know why. Sure, I may not have seen the sniper who nailed me from a distance, or the elite dragon that snuck up on me from above, but I understand why I died.

Not this time. It probably had a reason but it sure seemed like an arbitrary process. I had survived a short while, built a small shelter in which to hide a night, gathered a few resources, made a craft table and taken my first steps crafting a very few items – planks, sticks, slabs and a precious wooden shovel. It was all tickety-boo, or so it seemed.

About an hour after I started, I died while climbing a hill. Don’t know why. I wasn’t attacked. Didn’t fall. Was it lack of food or sleep? My political views? An in-game virus? All I know is that one minute I’m merrily whacking stones, and the next I’m dead.

That kinda sums it all up, doesn’t it? Be on my gravestone, if I have one: He died. Didn’t know why. Well, after reading a bit online, my first guess is starvation. Which I don’t think I should have suffered, given that my character was ingame for only perhaps three virtual days. A week, 10 days, maybe I’d understand.

Damn, I wish it came with a manual. There are, of course, books you can buy… but for now I’m referring to online guides (some of which are very good… like this one)

Okay, to be fair, there were some flashing heart-like thingies at the bottom of the screen just before I shuffled off this virtual coil. But there are no messages, no help screens, no explanations. No pop-ups interrupted my gathering to warn me I needed to eat or sleep or hide. So how was I to know they mean something fatal is pending?

Starvation, it seems, is a common way to die. Having to eat means having to find food, which consumes a lot of time that I’d rather spend building and crafting. But clearly the game would rather I was a hunter as well as a gatherer. I haven’t found any tofu blocks, yet , to suit my meatless diet… so raw chicken it is. But how do actually eat something ingame? I don’t know.

I just got started with Minecraft this week. I joined the many, many other players**, probably bringing the average age up to 12. I’ve known about the game ever since it was first launched in 2009, and even tried it a few generations back. The blocky, low-res graphics just didn’t catch my imagination then. Somehow they missed the point of me having a 4GB dedicated graphics card to run my gaming system.

It was like the Atari 800 all over again. Yes, I loved those days, and I spent many happy hours in the 1980s playing and programming on my Ataris. But the graphics never wowed me, even back then. I like today’s high-res, anti-aliased, tripled-buffered graphics a lot more.

Yet I was curious. What I had once thought would be a flash in the pan; a mere fad, took off and grew exponentially. Exploded, really. A gaming sensation. It inspired dozens of clones, too, none of which have any of the user base despite some enhancements and better graphics (although a few are weighty competitors).

Minecraft became the digital equivalent of Lego: an obsession, particularly among geeks, with avid users posting images and videos of fantastic creations they had built. Impressive stuff given that most objects are cubes and you have to place everything on a grid system. Despite which, castles have been built.

But it’s Lego with a few monsters thrown in (Lego’s Designer is just about building things, not surviving or fighting, but the later Lego Worlds is basically their version of Minecraft using Lego blocks instead of cubes). So what’s all the fuss?

Here’s what Mojang, the creator says about the game:

Minecraft is a game about breaking and placing blocks. At first, people built structures to protect against nocturnal monsters, but as the game grew players worked together to create wonderful, imaginative things.
It can also be about adventuring with friends or watching the sun rise over a blocky ocean. It’s pretty. Brave players battle terrible things in The Nether, which is more scary than pretty. You can also visit a land of mushrooms if it sounds more like your cup of tea.

That description is a spartan as the game’s graphics. Breaking and placing blocks. Ho hum… until you start doing it and it becomes addictive.

It’s a sandbox game, which means there are rules but no quests, no goals, no victory points to accrue, no levels to grind, no accomplishments to amass. You basically play until you stop. Oh, sure, you might say survival is a goal, but it’s not the same as reaching level 100 with your paladin death knight. And I’ll concede there is an achievements ladder, but it’s secondary to gameplay compared to games like WoW or WoT.

I like sandbox games, but most have a closed feel. They have physical limits, like the amount of buildable and in SimCity or the number of houses in The Sims. Few are actually open world games. I like the freedom of action and movement of open worlds, which make the digital world more immersive and feel less constrained. Minecraft is both: the world is infinite, procedurally generated with each new game and continually as you explore. So it’s always new: undoubtedly part of the appeal (as big as it, even World of Warcraft can feel small at times…).

As the game was developing, more and more features were added, more things to do, craft, gather and fight. You can now make complex machines ingame, and build some fancy dwellings. And game modes were added: there are now four – survival, creative, adventure, and spectator. Creative means no monsters, lots of resources. Basic sandbox stuff. Survival means you will die (like I did). Adventure? Wikipedia says:

Adventure mode was added to Minecraft in version 1.3; it was designed specifically so that players could experience user crafted custom maps and adventures.[44][45][46] Gameplay is similar to survival mode but introduces various player restrictions, which can be applied to the game world by the creator of the map.

Plus there is a multiplayer mode and servers for Minecraft communities (which I haven’t explored yet and may not until I can assure myself of players closer in age to me…). So there’s a lot to do and learn. And, I gather, some dying to do. But first I need to figure out how to craft fire to eat that raw chicken so I don’t starve to death next time I play.

PS. Rule number one is, apparently: don’t dig straight down.  Which no doubt I will test next game session…

* There is a curious social and philosophical experience in dying online that I’d like to explore more. What does virtual death teach us, say about us, explain to us? Does it desensitize us, or better prepare us for the inevitable?