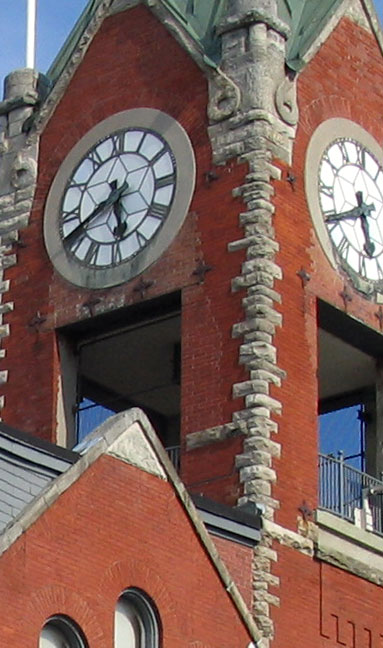 Yesterday members of council received a letter from our auditors that should clear up any misconceptions floating around about debt and debentures. It is clear and succinct.

I was also forwarded an email from a candidate (sent to his supporters) with misleading statements about how much debt there is. I don’t know if it was deliberately meant to be misleading – I suspect rather that the candidate simply doesn’t understand municipal finance. But it isn’t really a complicated process.

And no candidate should make claims based on misunderstanding or misinformation. It is their responsibility to get and present the facts, not fantasies, nor opinions.

In response to concerns over such inaccurate claims and misunderstandings, we asked for a clarification. Sue Bragg, B.B.A., CPA, CA, and partner in Gaviller and Company, which audits the town’s financial statements every year, wrote the following (emphasis added):

We understand there have been some inquiries regarding the “definition of debt” and how the debt levels have changed during this last term of Council.
Our professional opinion is that debt is external, contractual debt, typically in the form of bank loans, debentures and mortgages. This definition is in keeping with the presentation of debt on the Financial Information Return prepared annually for the Ministry, as well as the Ministry’s calculation of the Annual Repayment Limit.

Okay, here’s the first important point: debt is external. That’s both the professional and the legal definition of municipal debt as defined by the Ministry of Finance.

Debt is what we owe outsiders: money borrowed with interest and bank charges to be paid. It’s what affects your taxes. It’s our debentures.

It is not any internal loans we have. I’ll get to those a bit later and explain how they work. Just keep in mind that they are not debt by any professional or Ministry calculation.

So then what is our actual debt? Ms. Bragg continues (emphasis added):

We are unable to comment on the 2014 balances as we have not audited those transactions to date.

At the end of our term, this council will have paid down approximately $7.5 million of our debt, as we have been saying for months now. These are the facts verified by the auditor.

Why not? Because the difference is calculated from internal loans or commitments from reserves. That’s not borrowing from a bank. It’s taking money from reserves or our own bank accounts to pay for projects, then paying it back through the department’s annual operating budget.

Think of them like your own bank accounts. You pay your bills from your chequing account and put the rest (your reserves) into your savings account. Sometimes you need to “borrow” money from your savings account between paycheques to cover all the bills, but when your paycheque arrives, you pay it back. You always had the money; you just moved it from one account to another. Doing so doesn’t mean you were in debt.

That’s what our internal loans are: money moved from one account to another. Not borrowing from a bank. Departments have to account for the payback in their operating budgets – which makes them cautious about proposing projects without careful thought and budgeting.

To finance new projects, previous councils simply borrowed money from banks (debentures) or took funds away from our town reserves without paying them back. They didn’t call them loans, just payments.

That was not sustainable. We need to keep our reserves healthy and find ways to top them up. Sustainable finance was one of the goals of this council and we are on the way to achieving it with this practice.

This council instituted a system of “internal loans” that will see the money repaid and reserves replenished, not just spent. It’s a sustainable financial system.This way we get to rebuild our reserves without having to raise taxes.

It’s also a BIG savings for taxpayers: we don’t have to pay interest and bank charges for the money.

We keep our costs down and we build for the future. Our financial health is better than it’s ever been, thanks to this initiative and council’s other sound fiscal policies.

Sometimes, we have to borrow money to pay for large projects that are themselves paid for by other charges. Sewer and water upgrades, for example. Infrastructure of this type is financed from the fees we charge for sewer and water use. Not from property taxes.

The candidate’s letter claims, “It would seem the debt has not in fact been reduced by 7 million dollars but the debt has increased by about 1 million dollars by our current Council.” This is simply and utterly inaccurate, as the auditor’s letter shows. In fact, the calculations in the letter that arrive at a grossly-inflated figure show a clear misunderstanding and misrepresentation of the terms and processes of municipal finance.

We understand that, like many municipalities, the Town has some internally financed debt. We have not included this in our definition of debt as Council has the flexibility and authority to change the nature of these amounts by Council motion, unlike the external debt that must be repaid based on a legal contract.

To reiterate, the simple fact is: this council paid roughly $7.5 million from the $45 million debt we inherited. Plus, we topped up reserves by $11 million. I hope this clears up the misconceptions and misrepresentations floating around among less-informed candidates.