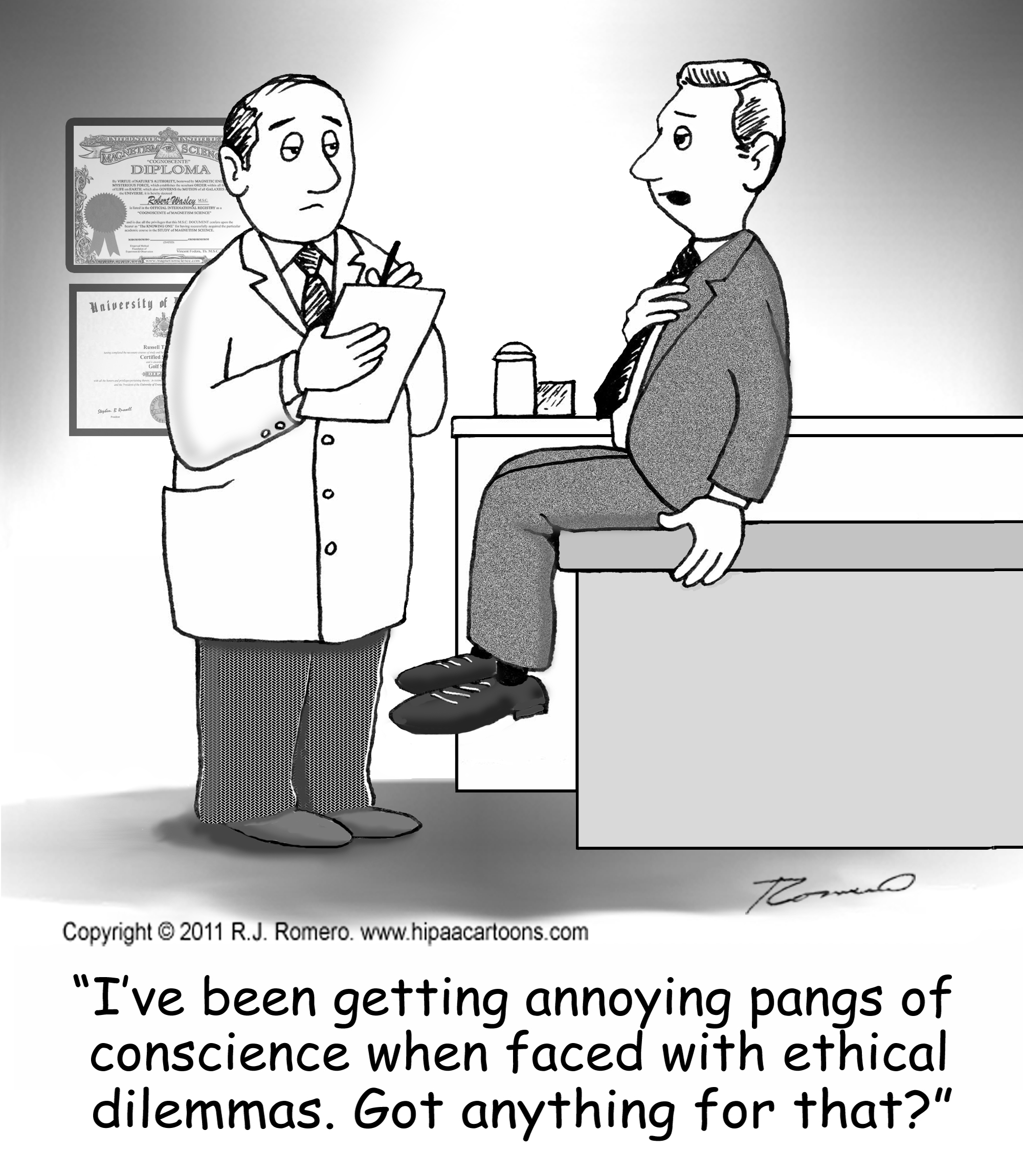 It’s official: our council is morally and ethically bankrupt. You may have felt that from their past behaviour, but Monday night they confirmed it for everyone. There is not a shred of decency left to share among them.

At the Jan. 24 meeting of council, they voted unanimously to revoke Ed Houghton’s Order of Collingwood award, given in 1998. Rescinding his award was done to punish the former Collus CEO for hurting our mayor’s feelings a decade ago. Not a single member of our diminished council had the courage to stand up against our tyrannical mayor and say that it was neither ethical nor moral to use his position and town resources to pursue his personal vendetta.

I have often written about what appears to me as Mayor Saunderson’s pathologically obsessive pursuit of revenge against people who thwarted his ambitions in 2012, but the latest chapter in this petty bully’s story is the lowest he has delved yet. You can read my previous posts here, and here, and here.

At 01:50:32 in the video of the meeting, Saunderson reads his first motion, to revoke Houghton’s award; weaving into it his own, selective narrative about the events a decade and more ago, droning on in a lengthy bloviation about what hurt his feelings back then and why someone should pay for it.

At 01:54:20 Councillor Berman, ever the spineless sycophant, seconded it. Despite the lack of relevance to the issue at hand, Berman then read as his example to justify his vote a story from the US University of Rhode Island, that revoked honourary degrees from former American politicians. A facepalm moment for council watchers.

At 01:55:58 Berman says he doesn’t believe “right or wrong can only be decided by a court of law.” That speaks volumes about Saunderson’s cabal: they feel themselves above the law and god-like, able to pass judgment on others regardless of due process, legality, or justice.

At 01:56:34 Councillor Hamlin says she agrees “with Councillor Berman about right and wrong.” This is coming from a lawyer! A lawyer who must have felt there was nothing wrong in voting for a sole-source contract with her former employers of 22 years but not disclosing that relationship publicly. Perhaps she didn’t read the parts of the inquiry report that cautioned numerous times against even the appearance of conflicts. Yet she has the gall to comment on “transparency and the public trust” at 01:57:23!***

At 01:56:55 she adds “All of the law you need to know you learned in kindergarten.” I find it frightening to think a lawyer would suggest that the immature behaviour of five-year-olds is the basis of her contemporary morality and legality. But then, kindergarten is where many children learn to be bullies, so that fits this council.

Councillor “Lapdog” Madigan speaks at 01:59:40 about a private text message he received during the meeting from an unnamed person who commented his apparent look of disengagement (noted, I suppose, because he rarely looks up or seems to pay attention to the matters being discussed during the meeting). Uh, yes, Madigan: if you’re paying attention to text messages from others, you ARE disengaged. He meanders from trying to justify his lack of attention into slavishly supporting his master’s motion.**

Risibly he talks about “horrific acts companies and individuals did to our community.” Such self-serving twaddle: those “horrific acts” included getting two new, state-of-the-art, publicly-owned recreation facilities to fulfill the community’s needs for more ice and water time, at no extra cost to the taxpayers. His contribution to Collingwood has been to approve numerous sole-source contracts relating to Saunderson’s vendetta that have cost taxpayers more than $10 million in two terms.

At 02:00:50 Madigan thanks The Great Leader for bringing forward the motion of revenge and how he appreciates it “wholeheartedly.” Could he get any more oleaginous? But I laughed when he whined that “people who write blogs may call us lapdogs.” Which, of course, was aimed at me, and yes, the nickname fits oh so well. But I’m glad to know he reads my posts. I wonder if the mayor slipped him a treat for his comments later.

Councillors Jeffrey, McLeod, and Doherty do not speak to the motion.

At 02:01:55 Saunderson speaks tried to justify his spiteful actions. Hardly surprising. Bullies always need to justify themselves in the eyes of their followers.

Keep in mind the blatant hypocrisy of our mayor who has voted numerous times for sole-source contracts with his former employers, and with his friend’s company. And who has spent more than $10 million of taxpayers’ money to pursue his goal of revenge against everyone on council and in town hall who stood up to him in 2012 and refused to give the YMCA the $35 million handout he demanded.

Keep in mind also that an OPP investigation into the sale of the share of Collus and the contract for the Sprung buildings was opened in 2013. Police interviewed many people, went through phone and bank records, read documents and emails from town hall and found no criminal wrongdoing. No one has been charged with breaking any law. But innocence never stopped Saunderson from his vendetta. The flogging must continue until morale improves.

At 02:03:59 a recorded vote shows the motion is passed unanimously. Again no surprise: since Councillor Comi resigned, there’s no one with a conscience left at the table to contradict the mayor’s dictates.

But Saunderson hasn’t finished with his cancel-culture program yet. At 02:04:16 he reads his second, boringly repetitive motion, this one to terminate the town’s membership in OMWA (Ontario Municipal Water Association), the non-profit, province-wide association that advocates for municipalities with the province about water issues and legislation. Although OMWA has nothing to do with the town or earlier events, this is simply because Houghton has worked for OMWA since he retired. As I wrote about the mayor in a previous post:

Just when you thought he could not be any pettier, he proves us all wrong.

This motion is pure spite: Saunderson demands that not only will the town leave the organization, but the town will send a vindictive “letter to the OMWA board and copied to all members of OMWA attaching this motion and the link to Justice Marocco’s report.” Of course, I suspect our mayor would want to leave a water association after his own, abject failure to deal with our own town’s water issues. As I wrote earlier:

His lack of leadership, while ignoring a crucial pipeline contract until a year after it had expired led to council’s chicken-little-sky-is-falling over-reaction towards our own water system. As a result of the mayor’s failure to pay attention to critical issues or staff reports, we suddenly had a water “crisis” that required council to pass a job-revenue-and-growth-killing bylaw that made it even harder for workers during the pandemic, and will hurt the town for several more years, until a new plant is built. So maybe there’s a more personal reason Saunderson doesn’t want to be in an association dedicated to improving and advocating for efficient and safe water systems that could point to Saunderson’s failure as the textbook example of how not to handle such issues.

So you have to think there’s a hidden, personal reason behind Saunderson’s second motion: his own failure to live up to the responsibilities of his mayoral role. Open and transparent, eh?

Saunderson isn’t content simply reading another petty, run-on motion: at 02:06;48 he just has to speak to it to lay it on just in case his cabal might think of squirming out from under this rock. Houghton’s role with the OMWA has nothing to do with the events that hurt Saunderson’s feelings, but that doesn’t stop our mayor from exacting his revenge.

At 02:08:03 Berman is quick to second the motion, to prove his loyalty before anyone else can leap into The Great Leader’s lap. And, as expected, at 02:08:16 he lathers on his support for his master’s motion in his best Uriah Heep manner. If he had any hair, I’m sure he would be onsequiously tugging his forelock. He finally makes a cringeworthy, self-aggrandizing statement about how great his own blog was in 2017.

At 02:09:42 the recorded vote again shows it is unanimous.* Saunderson has sufficiently cowed his pet councillors so none dare raised their voice in opposition. The takeover is complete: morality, ethics, and conscience have been discarded, replaced by abject loyalty. Sic semper tyrannus.

* The clerk incorrectly states at 02:09:45 that vote was “carried unanimous” when the verb requires the adverb: unanimously. 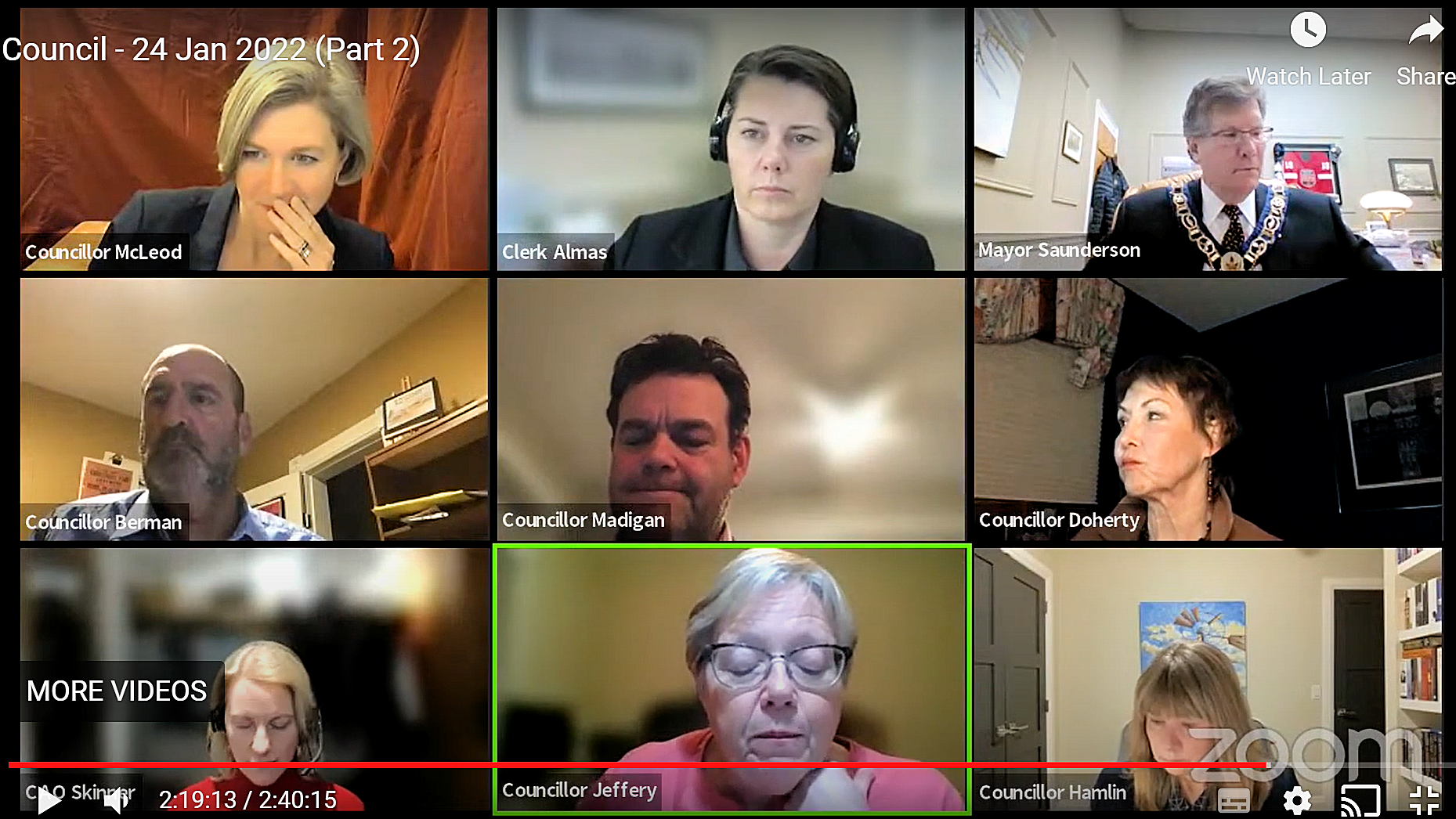 ** While Coun. Jeffrey reads her notice of motion around 02:18:54, you can see the “disengaged” Madigan apparently typing a message or email to Coun. McLeod. At 02:19:00 they both smirk at whatever he has sent. At 02:19:26 Mcleod appears to be typing a response at which they both smirk again. And at 02:19:30 Madigan appears to be typing back to her to which she responds at 02:20:00. So much for paying attention to the business at hand and taking their responsibilities seriously. Why aren’t these typed comments made public? Oh, right: they’re a secretive, deceptive bunch. And why isn’t our lacklustre mayor doing HIS job: paying attention to his councillors, and telling them to stop texting one another? Oh, right: he abdicated his responsibility for that role a year ago when he announced he was campaigning for the PC party nomination.

*** One wonders when our council members will be so open and transparent they disclose whether or not they have criminal records, or if they have been or are being sued, and for what. One also wonders why the local media have not asked these questions of them.