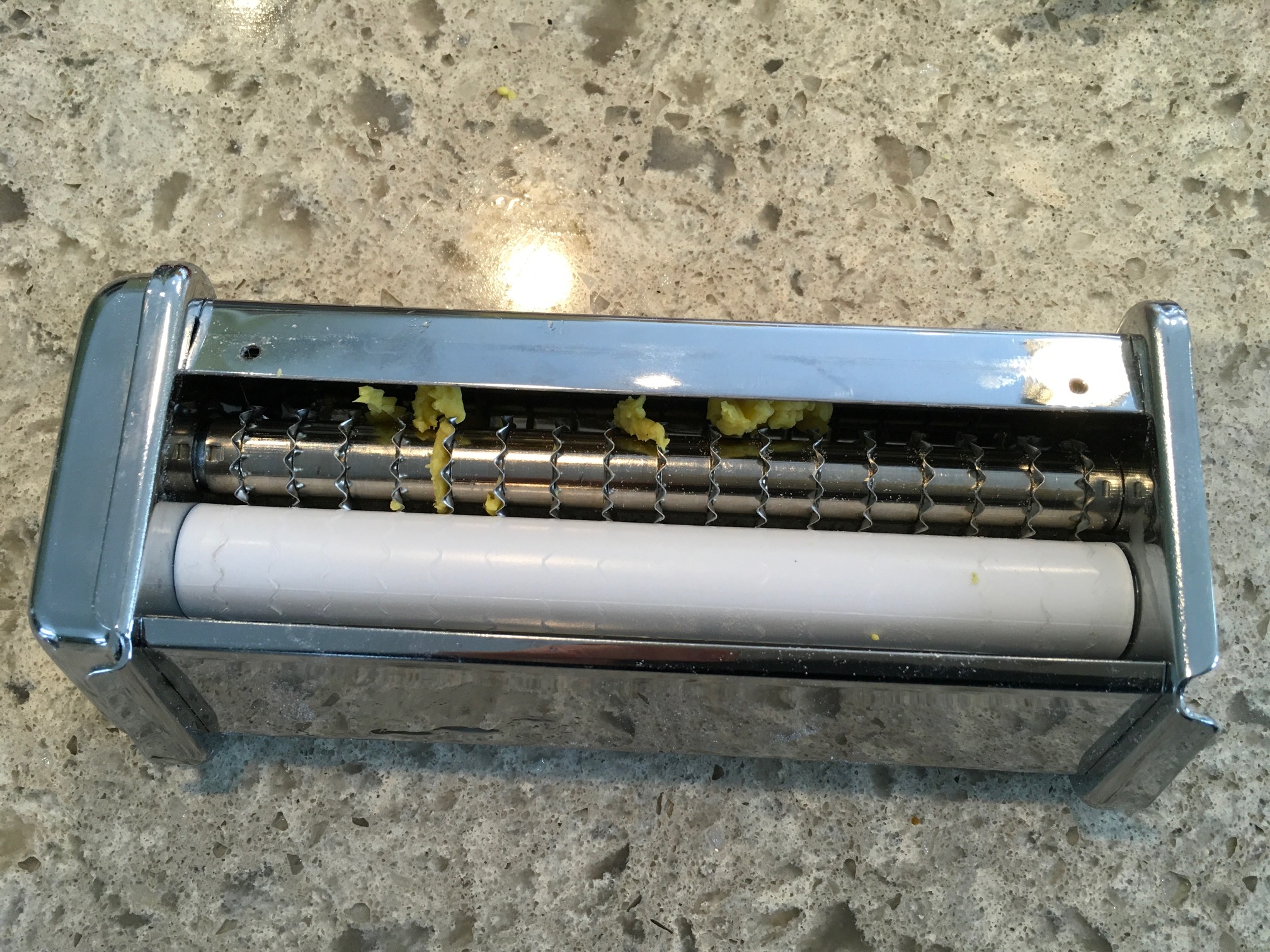 I made another batch of pasta this weekend to test my new mafaldine cutter, but it proved problematic . The dough jammed in it against the blades, so I had to switch to my lasagne ricce cutter, which worked perfectly. Because it got so deeply stuck, I had to remove the blade piece on the new cutter and spend some time fishing tiny bits of dough from the teeth.

I will have to contact the seller and manufacturer to see if there is something I can do to prevent this in the future. I plan to do a test in the near future, not for cooking but just to see if there are criteria that affect it, such as the thickness or the dryness of the dough. The same dough worked fine in the fettuccine cutter and lasagne ricce, so it must be something I wasn’t aware of specific to this device or style, or perhaps the dough itself. 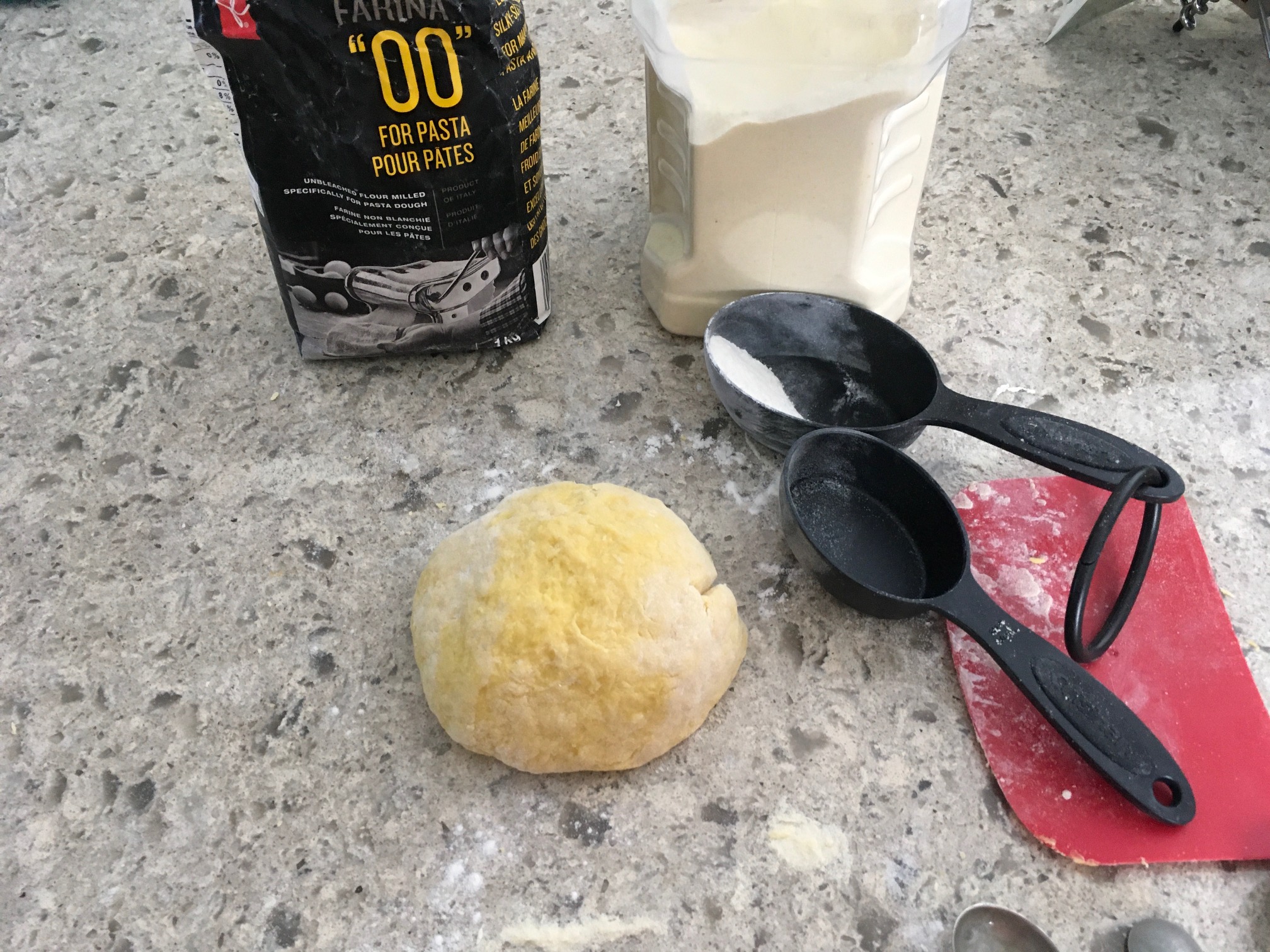 Meanwhile, I had decided to make a dough with 100g Tipo 00 flour and 50g semolina, plus two eggs (instead of 1 whole and 1 yolk), 1/2 tsp olive oil, a pinch of turmeric (for colour), and a pinch of salt. Plus water as required to moisten the dough. Just a minor variation on my usual recipe.

It’s an easy dough to make, but I got distracted while mixing and added some water to the flour before adding the eggs. When I did add the eggs, the dough was too wet (eggs add a lot of liquid).  I had to add more of the two flours to compensate until it was finally dry enough to knead. The kneaded dough ball weighed 387g before I left it to rest. That was more than I had planned for.

When the hour of resting was up, the dough still felt a bit too wet, so I sprinkled each piece with flour before rolling, and between laminations did that again. Eventually, I was able to roll and cut the noodles without any issues or sticking. As in the past, I rolled through stages from setting zero to the number six setting on my Atlas machine, which I measured at around 0.66mm for squeezing the dough (and 0.35mm for pushing paper through the gap). This makes a thin, fragile sheet of dough. 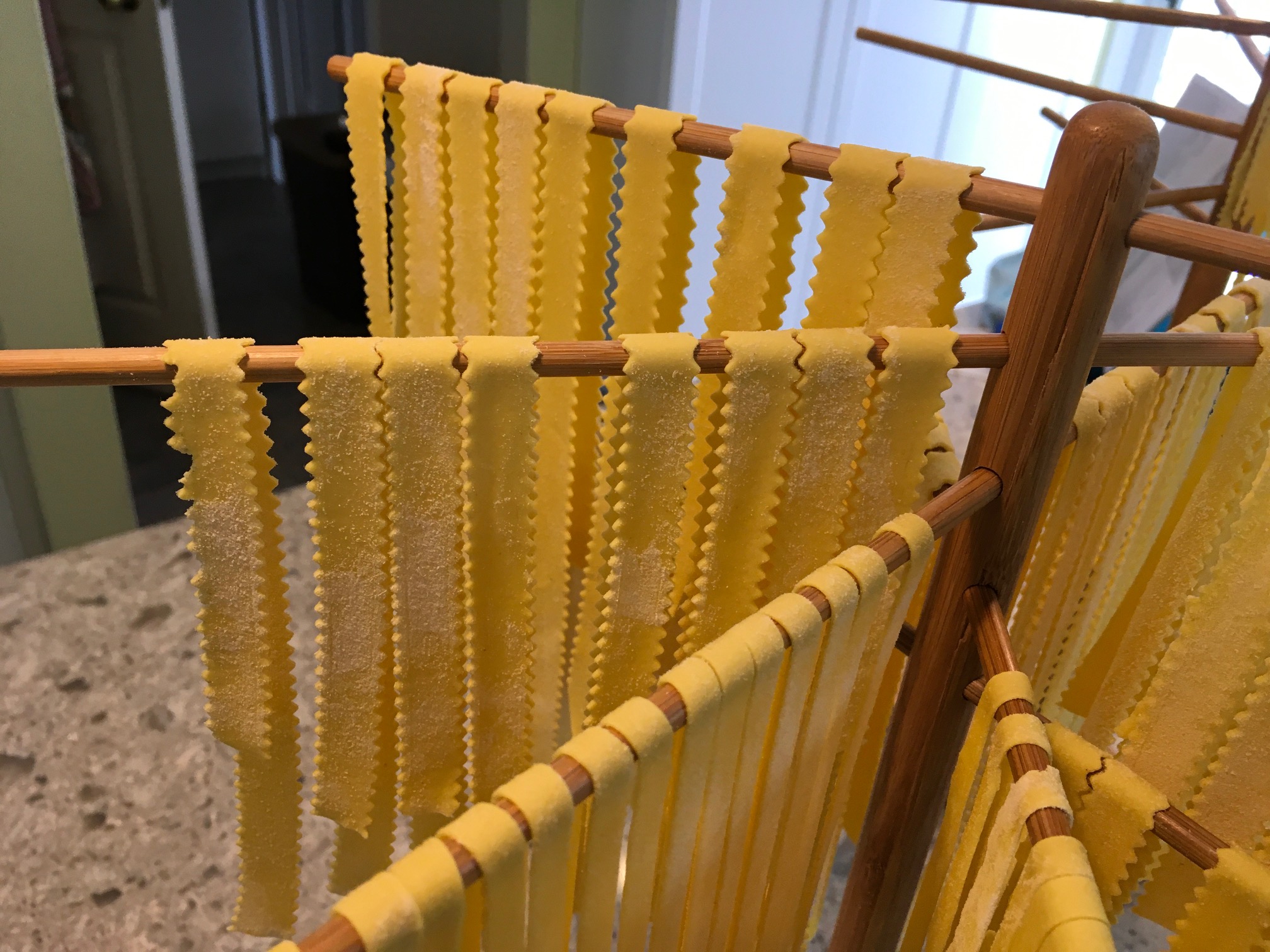 The noodles dried for about five hours, at which point the lasagne ricce-cut noodles were so brittle that moving the drying racks or roughly closing a drawer on the kitchen island would shake the racks, and cause the noodles to break. Pieces fell. They always broke at the place where they were held to the rack, so they were halved in length (a few broke on falling into smaller fragments, but not many).

I’ve never had that happen in the past, and I still can’t say why this batch was more brittle than any other. I suspect the greater width of this noodle means it has more weight, which pulls the dough further down as it dries. This stretches the narrow section held by the rack (it was a thin noodle to begin with). I had cut these noodles the same length as my fettuccine (about 25cm), so in future I will make them shorter. It’s another lesson: the wider noodles need to be shorter to prevent breakage during drying. 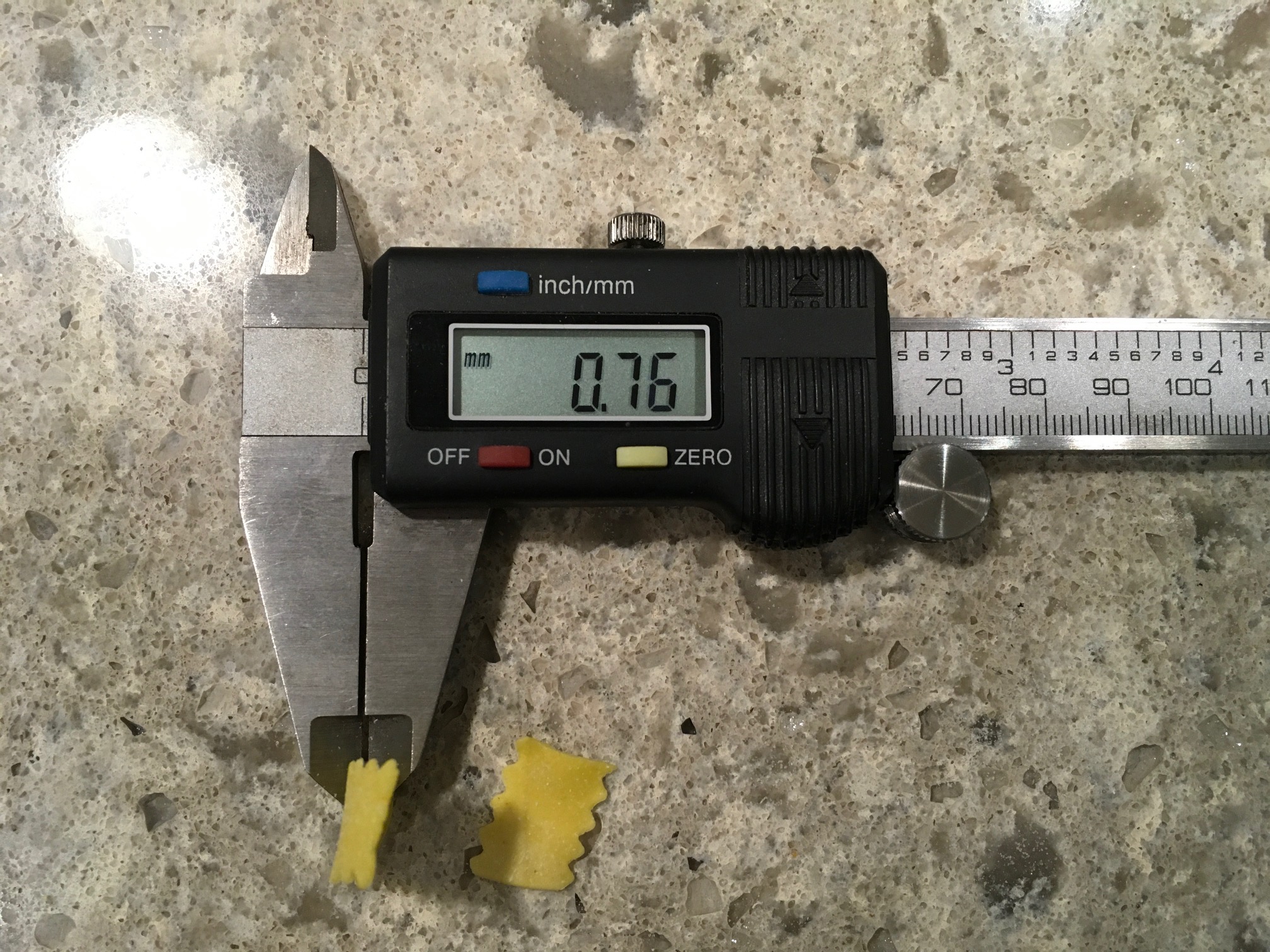 As usual, they cooked well and tasted superb, with a silky texture. After cooking them, I removed about 1/2-3/4 cup of the pasta water and drained the noodles. Then I put them back into the pot with the reserved water and a piece of butter. I heated the pot, stirring the mix so the butter melted into the noodles. I finally added the noodles to the prepared sauce simmering in the pan (I made a tomato-based sauce with some extra cherry tomato sauce added for a little sweetness, along with onions, peppers, mushrooms, garlic, ground pepper, oregano, and a pinch of cumin). This was cooked for just a couple of minutes to properly merge the sauce and pasta. Delicious! 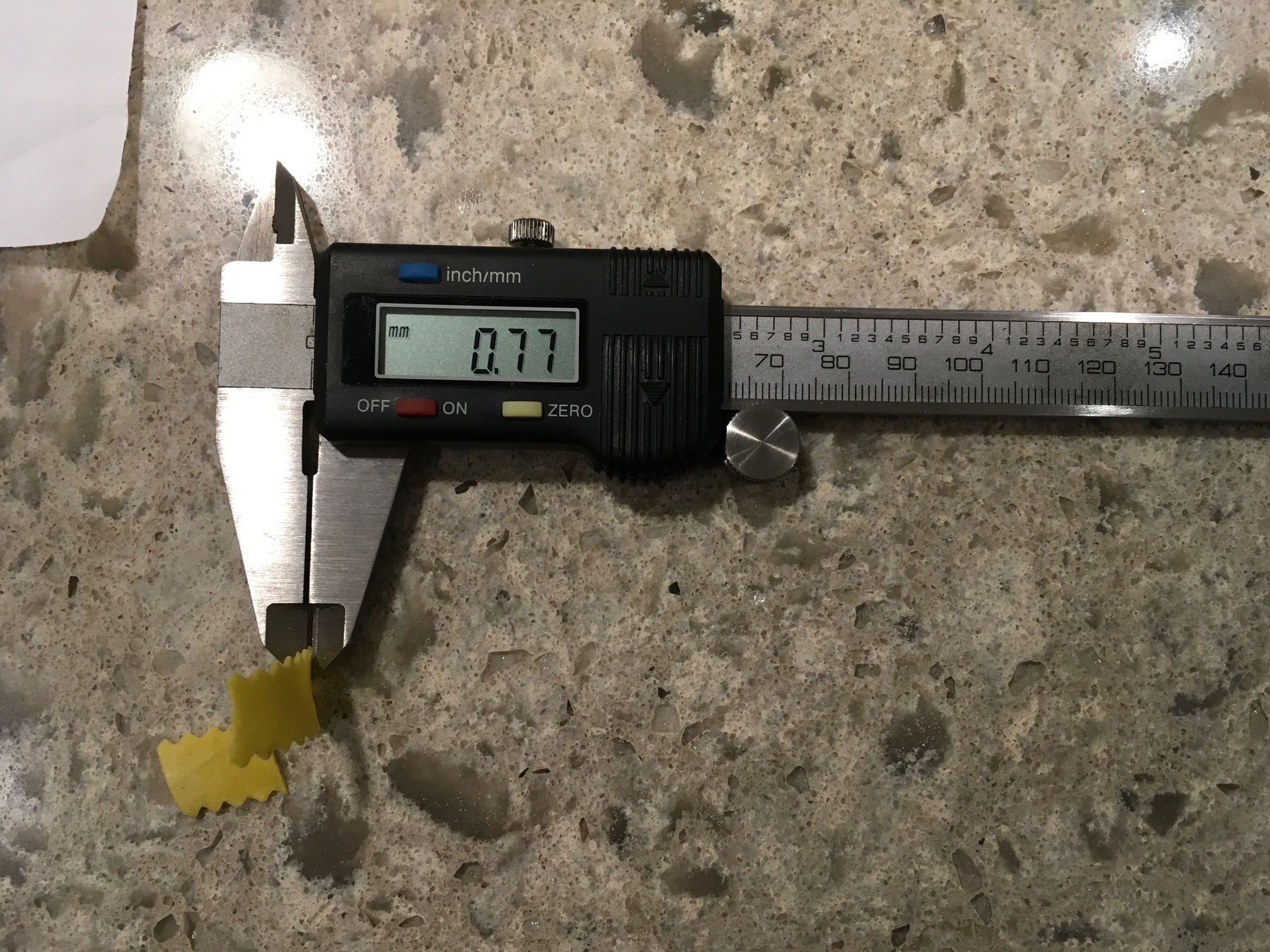 After the meal, I took out my borrowed micrometer and measured the thickness of a few small pieces of lasagne ricce noodle I had saved. On one I got a range of 0.74-0.83mm, and on the second 0.72-0.82mm. That’s nice for cooking, but a bit thin for this kind of pasta (good for ravioli, though). On the positive side, this thinness means it cooks quickly and evenly.

I had planned to test a wider rolling gap this time, but when I had problems with the mafaldine cutter, I went back to setting six, my old standard. While cutting, I looked at setting four and thought it was a bit too thick, so perhaps five will work in future. But that will require cutting shorter noodles, too, for the added weight when drying. I think I should try something in the 15-20cm range next time. 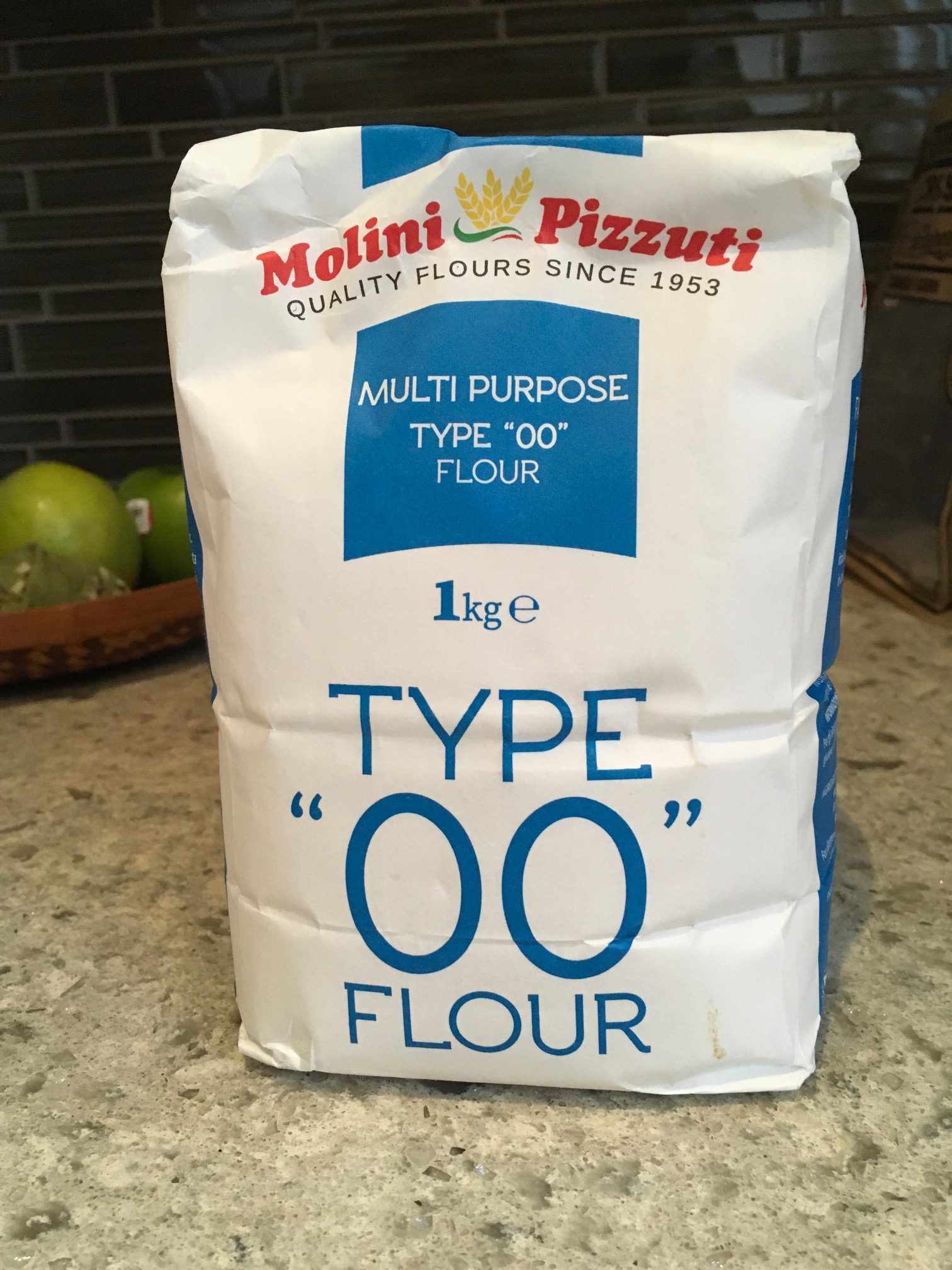 And as a final note, I found a bag of tipo 00 flour marked all-purpose at an Asian grocery store in Barrie earlier this month (I had to travel there for my post-radiation consultation with my urologist and afterwards stopped to pick up some groceries). I had never seen one marked “all-purpose” just for specific uses (pasta or pizza, identifying lower and higher protein content, respectively). Once my current bag of tipo 00 for pasta is finished, I will try the all-purpose to see if it makes any difference in pasta. I am still looking for an unbleached tipo 00 flour. Please let me know if you see any marked as such.