You can’t help but chuckle when Tumak runs down the rocky slope to battle the baby Triceratops (about the size of a Sheltie) and ends up rolling in the dirt with the all-too-obvious rubber model. I half-expected it to squeak like a dog toy.

It’s just one of the many scenes in the 1940 version of One Million BC that make makes it fun to watch. Corny, yes, cheesy, perhaps. But mostly fun. And it was the top-grossing film of the year; that’s no small accomplishment.

The film is basically a Romeo-and-Juliet love story with a happier ending. Throw in some moralizing, a bit of clumsy sexism, warped Darwinism, paleontological anachronisms, some special effects (of sorts… although nominated for an Academy Award for those effects, today they are pretty comical, some even cringeworthy…) and you have a good movie. For its time. Those effects don’t stand up quite so well nigh-on eighty years later, what with out CGI-dense extravaganzas, but don’t give up on it too quickly.

Instead of the Montagues and the Capulets, we have the Stone people with their Romeo (Tumak – Victor Mature) and the Shell people and their Julie (Loana – Carole Landis). And there’s no Mercutio. Or a friendly Friar Laurence. But there is Akhoba – Tumak’s brutal father (Lon Chaney Jr) who gives the film its pathos in a poignantly moral scene, and Ohtao, the friendly rival for Loana’s love who takes his loss of lover and spear who takes the whole competition with a smile.

Call it Romeo and Juliet lite. Without even a syllable worthy of The Bard, of course, since everything vocal in the movie is either a grunt, growl or a made-up word (both tribes seems to speak in single-word sentences and seem to have vocabularies limited to only a handful of words per tribe). Others have pondered more deeply over the language than I, but I did wonder if they only had nouns; verbs were to be discovered only sometime in the future. 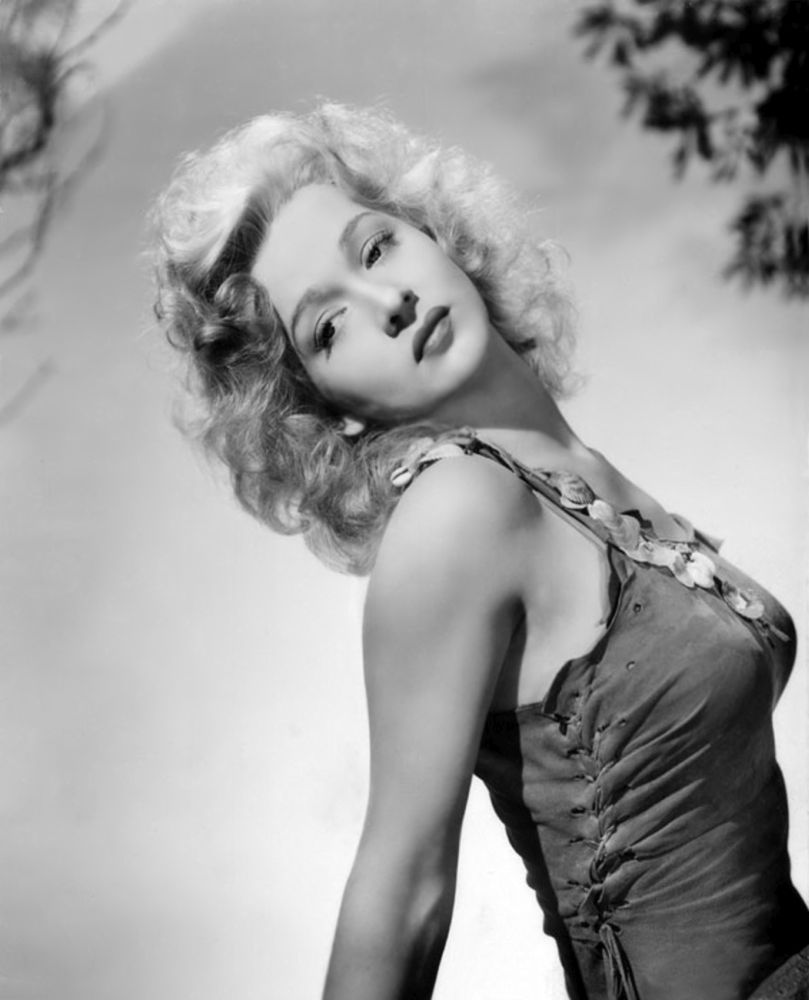 And despite the cornball (and egregiously inaccurate) notion of dinosaurs and cavemen co-existing, or even cavemen of this level of advancement a million years ago, or the hard-to-watch battles between real lizards (cruelty of a sort no longer allowed in cinema – it is a disturbing part of the film, although the monster scenes were re-stitched into several other B-films in later years), there’s still enjoyable watching here. Assuming you like B-films, that is. To which I always answer in the affirmative.

It’s shot in glorious black and white, has no sex and the violence is very tame (no blood and very few deaths). Even the loincloths and costumes aren’t particularly titillating even for the time (no fur bikinis like Raquel Welch wore in the 1966 sexploitation remake). However, the rather demure Carole Landis looks pretty fetching in her outfit. For the women in the audience, the clean-shaven and frequently topless Victor Mature was considered a romantic hunk in his day. Their romance is remarkably chaste given their skimpy outerwear.

Sadly, Landis, who did 49 films in her short career, committed suicide in 1948 at the age of 29. Mature retired in 1984, lived until 1999, when he died of cancer. Both were more talented than they are often given credit for – and seldome given roles in which to express that talent.

There’s a lot of action in the film, including some scenes of real-life lizards fighting, shown in the background magnified to large scale while the puny humans in the foreground cower and run. Yes, some of the creatures have obviously fake horns and fins glued to them and look a bit silly (aka slurpasaurs). But overall, the effects are reasonably well done given the budget (no stop-motion or animatronic monsters, however, but there is a guy in a baggy T. Rex suit…). No suspension of belief is required here.

Ok, the Hollywood image of cavemen and cavewomen is pretty silly, but it launched a thousand cliché (not least of all the Flintstones cartoon series). They grunt or have a limited language, primitive tools and live in (spoiler alert) caves, yet they can tailor some impressive costumes, keep their hair tidy and wear makeup. The Stone people are nasty, selfish, warlike, ruled by power and might (think of today’s gun-toting Republicans). Tumak’s father Akoba is the stereotypical abusive leader whose only rule is that might makes right. The Shell people are cooperative, tend to their elderly and sick and peaceful (maybe not quite like the Democrats – more like Canada’s NDP…). If they had more words in their language, I’ll bet they’d sit around the campfires singing Kumbaya.

After fighting with his dad, the exiled Tumak gets hurt, lost and is rescued by Loana, who nurses him back to heatlth. Through her he discovers the benefits of tool-making and sharing (Beauty conquers the Beast) and shaking trees to make apples fall. Back in the Stone tribe, Akoba is crippled by a beast while hunting and falls to the bottom of the feeding chain in the tribe, barely able to survive on scraps.

Having graduated (barely) from the Shell tribe’s school of civilization, Tumak then steals Ohtao’s spear and takes it and Loana back to the Stone tribe. There he wins a battle to become the new leader and civilizes the rest. Instead of them hunting mammoths, Tumak gets them picking fruit just like stone-age plantation workers. He shows mercy and forgiveness to his crippled father and teaches the rest how to share and care for children and the elderly. Moses in a loincloth.

Eventually the two tribes meet during a disaster (cue volcano scene, thrown more lizards into the mix…) after which the survivors merge, and go off into the sunset in happy cooperation. All civilized and beaming, gender roles comfortably confirmed.

Such is the uplifting effects of civilization. We have a cheerfully imperialist tale where no one is exploited or enslaved with a hint of Christian charity thrown in. You’d almost think Rudyard Kipling wrote the script. But there’s possibly a coded message here about the dangers of fascism (the Stone tribe) – it was 1940 after all, a year before America entered WWII. Or maybe there’s a message about dysfunctional families (could it be It’s a Wonderful Life with dinosaurs?). Whatever. I don’t dig too deeply into the hidden meanings buried in B-films. I just let them entertain me.

I first saw this film on TV in the late 1950s or very early 1960s. I don’t think I’ve watched it (in its entirety) since until this viewing. But having seen it again, I am glad I did because it brought back a lot of happy childhood memories. Still, it’s not likely something I’ll likely watch again any time soon, if for no other reason than I still have a few hundred more B-films to watch in my collection. But if you have the chance and haven’t seen it – watch it (it’s even our on Blu-Ray!).

You might be pleasantly amused by its presumption. And its innocent naïveté. While it wasn’t filmed as a comedy, it brings a few unintended chuckles today.

(PS. The film opens with a rather odd modern day scene of hikers lost in the mountains who come across a cave full of primitive artwork, and a professor who translates it for them into the film’s tale… but nowhere in the movie do the tribes actually paint anything on cave walls to explain who might have done it.)