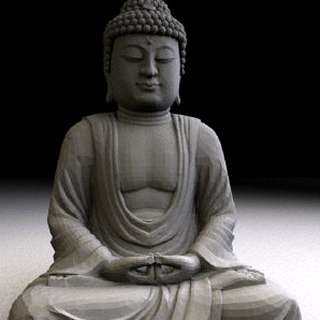 One of the most inspirational, moving books in my library is the Dhammapada, a collection of sayings of the Buddha, originally from the Pali canon. I’ve had a version of the Dhammapada in my library since the late 1960s, and read it through many times. It’s good to reread it often.

My first copy I recall was Irving Babbit’s edition, published by New Directions press in 1965. It may still be hiding on a bookshelf upstairs for all I know.

It’s one of my desert island books. You know: one of the list of 10 books you’d want to have with you if you were stranded on a desert island.

Over the years, my favourite version has been the Still Point Dhammapada by Geri Larkin, guiding teacher at the Still Point Zen Buddhist Temple in Detroit. (Her Buddhist name is P’arang.) I like it because it’s not simply a translation but a witty and wise commentary that clears away the clouds and makes it a very personal work. Larkin helps guide the reader towards the basic tenets of everyday Buddhism, rather than simply offer the words for us to contemplate.

The Dhammapada is not a literary narrative like the canonical gospels. It is more like the verses in the Gnostic Gospel of Thomas. (Gnostic only because it was found in company of Gnostic texts in the Nag Hammadi library; it doesn’t profess Gnostic beliefs, however). I also keep it with the Meditations of Marcus Aurelius as a book I can pick up and read at random for a shot of wisdom.

One version of the Dhammapada on my shelf is the classic Max Muller translation from 1870; popularly reprinted as a copyright-free edition. Another is an older Penguin Classics version from the 1980s. I have a couple of odd versions printed in India and Southeast Asia by Buddhist teachers, somewhere in a box.

There is a more recent Penguin edition, translated by Valerie Roebuck (2010) but I don’t have it yet (on order though).

I’ve never paid that much attention to the translation until recently. It’s tough for Westerners to appreciate whether a translation is good or bad because so few of us can read the original Pali – that falls into the realm of scholars. They may be technically adept but often not poets or even practicing Buddhists. And many of the online translations are by scholars and Buddhists for whom English is a second language. In both cases, the renderings can leave the reader feeling like something’s missing.

This weekend, while in Toronto (and scouring what few remaining bookshops I could find), I came across a new translation by Glenn Wallis (Modern Library, New York, 2007). It’s supplemented by a good reading guide with commentary and notes to help explain the translation, the original language, the various terms and symbols.

Where Larkin makes her version a personal, intimate guide, all about daily life and being in the moment, Wallis spreads a wider net, bringing in much more Buddhist practice and belief in a more scholarly manner. Both are worthwhile approaches and both authors are practicing Buddhists. Wallis is also a professor and a member of the Buddhist punk band, Ruin, which adds another facet when considering his translation.

Blogger John Murphy compares the Wallis and Roebuck translations, citing a couple of verses side by side, which I quote here:

#6 Roebuck: Others do not understand/ That we must control ourselves here:/ But for those who do understand this–/ Through it, their quarrels cease.

Wallis: Some do not understand/ That we are perishing here./ Those who understand this/ bring to rest their quarrels.

#85 Roebuck: Few among humans are those folk/ Who cross to the other shore:/ These other people/ Just run along the bank.

Wallis: Few are those among the people/ who cross to the other shore./ The rest of humanity just runs about/ on the bank right here in front of us.

Roebuck’s translation, he says, is “more terse, didactic, austere manner,” while Wallis has a “confident, American delivery.” Both strike me as excellent, although from only those two samples, I can’t say Roebuck is any more austere than Wallis. Didactic? The book is meant to be didactic!

To which examples I add these from online sources:

Ven Nàrada: 6. The others know not that in this quarrel we perish; those of them who realize it, have their quarrels calmed thereby.

Max Muller: 6. The world does not know that we must all come to an end here;—but those who know it, their quarrels cease at once.

Daw Mya Tin: 6: People, other than the wise, do not realize, “We in this world must all die,” (and, not realizing it, continue their quarrels). The wise realize it and thereby their quarrels cease.

Sangharakshita: 6. Others do not realize that we are all heading for death. Those who do realize it will compose their quarrels.

Ven Buddharakkhita: 85. Few among men are those who cross to the farther shore. The rest, the bulk of men, only run up and down the hither bank.

Ven Nàrada: 85. Few are there amongst men who go Beyond; the rest of mankind only run about on the bank.

Max Muller: 85. Few are there among men who arrive at the other shore (become Arhats); the other people here run up and down the shore.

Daw Mya Tin: 85: Few among men reach the other shore (Nibbana); all the others only run up and down on this shore.

Sangharakshita: 85. Few among men are those who go to the Further Shore. The other (ordinary) people chase up and down this shore.

(I can’t quote from Larkin because I lent my copy to a local woman). There are others you can read or download online – dozens, in fact. You can see in this small sample the variety of translation. This page compares 23 different translations of verse 372 – however, since it was created in 2004, it does not include any of the more recent editions like those of Wallis, Roebuck and Fronsdal. However, it shows the complexity of translation quite nicely.

I can only judge the various editions from my own personal perspective as a writer – and a reader who does not read Pali, Some are good, some are poetic, some are simply odd. Most, however, seem to be either awkward and clumsy or airy and vague. Guides for living should be clear, concise and solid. And, yes, a little poetic, too.

Perhaps it’s difficult because the original language is innately archaic and spare. Like many translations of the Bible, the Bhagavad Gita or the Greek philosophers. That may lend a sense of formality to the language, but translations of ancient works often seem so stuffy, so pedantic to me. Max Muller, for example, uses ye instead of you, which always causes me to lift from the meaning to peer at the words and question the style.

Blogger Shravasti Dhammika was lavish in his praise of the Wallis edition, calling it, “…not only everything this little Buddhist classic should be, I would go so far as to say it is the best Dhammapada presently available.”

His translation has a cadence that reads exceptionally well, and given Pali’s stylistic and grammatical particularities this is quite an achievement. And just as important, it is as faithful to the original as you could want. At the end of the translation Wallis has just over 100 pages of notes, but don’t let this put you off. These notes include a learned but accessible account of the history, grammar and meaning of the Dhammapada and its place in Indian Buddhist literature. His comments on some of the similes and his numerous quotes from the suttas illuminate the verses in a way that really gives them depth and increased understanding.

I can’t comment on whether Wallis is better, more poetic or more touching than Roebuck or Fronsdal, at least until my own copies of those translations arrive and I can compare them. From what I have read, Wallis is clear but somewhat dry. His commentary is scholarly, if not excessively stuffy, but not warm and friendly like Larkin’s. He is modestly poetic at times, but sometimes seems a touch too literal.

There will likely never been a definitive translation, one version that satisfies everyone. I don’t mind collecting several to compare them, having the insight of more than one teacher guide me. I like reading the wisdom books of the world’s cultures and religions. My only problem might be which one of them to take to that desert island should I travel there.

Let me leave you with a few verses from Wallis do you can help decide for yourself:

One should abandon anger.
One should give up pride.
One should throw off every fetter.
Troubles do not befall the person
who, possessing nothing,
does not cling to body and mind.
Verse  221

More toxic than rust
is ignorance, the greatest toxin.
Eliminating this toxin,
be flawless, you practitioners!
Verse  243

As an elephant in battle
bears the arrow shot from a bow,
I will endure insult;
for many people have poor self control.
Verse 320