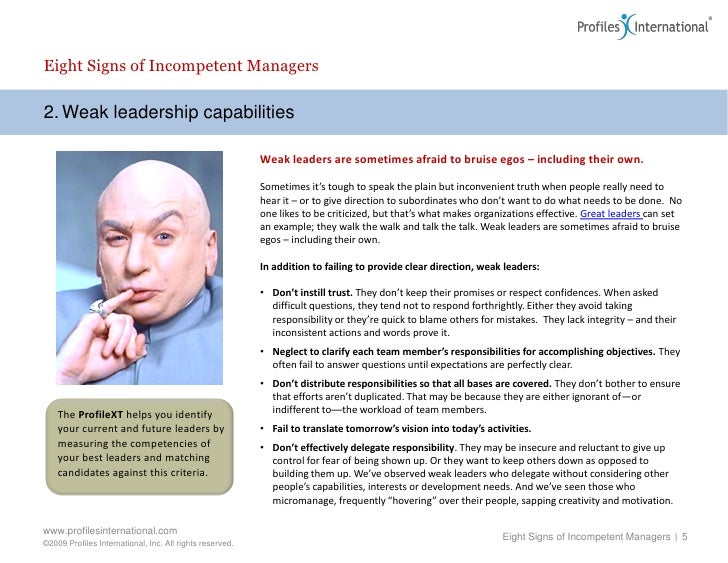 Further to my earlier post, I wanted to provide some tips on how to spot incompetence in an employee or, especially, in managers and executives. I understand that incompetence may be a subjective view. What some view as incompetence others may see as cautionary, conservative or even adequate. But here’s what others have identified as incompetent or dysfunctional behaviour or personality traits in managers and leaders.

Incompetence is not black-and-white. It comes in many shades. And incompetence doesn’t (always) mean stupid: intelligent people may get promoted above their competence level, according to the Peter Principle, discussed in my previous post. They may be inexperienced, or weak, but only initially.

To be incompetent, a manager need not have all the characteristics in any list: even one may hamper his or her ability to perform effectively. A combination may freeze the operation into total stasis or may send it off in wrong directions. Or it may limp along. It depends on the situation.

Don’t assign a trait or character to someone for simple human failings, mistakes or one-off situations. People make mistakes and even managers can learn from their mistakes. At least the best do. Only when they repeat the problem should you consider it as incompetence or sign of dysfunction.

So look through these qualities and see if they fit anyone you know, anyone you work with. It’s a bit like birdwatching. Make a checklist of these warning signs and check them off as you see them in practice. 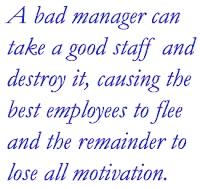 An article at Fast Company identifies “Ten Habits of Incompetent Managers.” Detailled explanations are provided in the article. These signs are:

Recruiters, a UK-based site, has identified eight signs of incompetent managers (taken from a booklet by Profiles International):

And seven are found at HR.com (also found in an article by the LOYP Agency):

And here are five from Forbes magazine:

Poor leadership surrounds us, it’s a fact of life and they seemingly find a way to keep their jobs. They are more focused on their personal needs and not of the professional needs of those below them. They have a hard time developing their employees because they lack the proper management techniques to do so. A leader is someone who you would follow to a place you would not go alone. Leadership is about action not status.

The article then lists ten signs, saying that incompetent leaders will… He also described the Auld Lang Syne syndrome: denigration of the present and glorification of the past; rigor cartis: an obsession with flow charts and pie charts; and compulsive alternation: the inability to read a report and instead ask a brief of an executive summary from the subordinate; all of which are more signs of incompetence.

The International Institute of Management provides an article titled “Dysfunctional Leadership & Dysfunctional Organizations” in which it lists numerous dysfunctional leadership symptoms and warning signs, including:

Sometimes these managers are called “bozos” in various articles, which Mr. Glitterati describes as:

…someone who thinks they are much smarter and capable than they actually are. They constantly over-estimate their abilities and under-estimate the risks and threats around them. They typically don’t keep an open-mind. They look instead for data that confirms a previously held bias. They also don’t handle details well. They expect other people to clean up their messes when they happen, and so don’t feel the need to obsess over the little things. Because they don’t have a keen sense for the competitive market in which they operate, they typically don’t have good judgment in key strategic decisions or when hiring top talent. Instead of hiring the smartest folks around them, bozos prefer to hire people who blow smoke, telling them how great they are, or for some non-obvious business reason such as sharing the same college or frat.

CBS News did a piece on dysfunctional workplaces that asked:

Does your boss act out and throw tantrums like a spoiled child? Are you afraid to bring up certain hot-button issues in meetings for fear of being humiliated? Does your company’s strategy change weekly? Daily?
These are all signs of a dysfunctional workplace, but you know what? Workplaces don’t become dysfunctional by themselves. People make them that way. More specifically, management people: CEOs, VPs, middle managers, your boss. Know how to spot them? Here’s a handy guide…

It then lists 20 ways to spot a dysfunctional manager or boss, including:

So there’s no shortage of signposts to help you identify incompetence, dysfunction or simply bad management. The Net is replete with such articles and lists. Make your own list, or use the above if you’re heading out to do some bad-manager spotting. Have fun!