Like quills upon the fretful porpentine. That phrase just makes the modern reader stop and wonder. What, you ask yourself, is a porpentine? And why is it fretful?

We never learn, although later interpreters would knowingly tell us a porpentine is a porcupine in today’s argot. Porcupine itself dervices from the Old or Middle French term, “porc espin” or spined pig. Which it isn’t – it’s a rodent. *

It’s an old word, encountered earlier as “purpentine” in 1589, but hardly a common word in any spelling after that, at least not in drama.**

Shakespeare wrote it as porpentine in 1602. One seldom encounters the word between his Hamlet and the middle of the 20th century, when it reappears in The Amazing Vacation, a children’s fantasy novel written in 1956 by Dan Wickenden. It also appears in P. G. Wodehouse’s 1960 novel about Bertie Wooster, Jeeves in the Offing.***

Today, of course, the word porpentine is frequently paired with the adjective fretful on may online sites and blogs. In more common use is the phrase “hair stand on end,” penned in the same verse of Hamlet. Phrases.org.uk tells us of that:

The allusion of makes your hair stand on end is to the actual sensation of hairs, especially those on the neck, standing upright when the skin contracts due to cold or to fear. This is otherwise known as ‘goose-flesh’ and the condition is, or rather was, known by the entirely splendid word horripilation. This was defined by Thomas Blount in his equally splendidly named book Glossographia, or a dictionary interpreting such hard words as are now used, 1656.

Horripilation. Love that word. We owe a lot to Shakespeare and the number of phrases of his we still write and speak today is truly astounding.

The Australian News commented on the longevity of Shakespearean phrases more than 400 years later:

Then there is the English language. The debt it owes to Shakespeare (and the slightly later King James Version of the Bible) is incalculable. No English speaker with any pretensions to culture (above that of phone texting or advertising brochures) can avoid using words or expressions that originated with the Bard of Avon. Not bad going for the son of a draper.

Porpentine isn’t one of Shakespeare’s many neologisms, but rather a nonce word: “a linguistic form which a speaker consciously invents or accidentally does on a single occasion.” Or in this situation, a word used rarely (but not singly). Perhaps it’s simply his unique spelling of purpentine.

Shakespeare was, regardless, an unprecedented source of neologisms and nonce words. According to the Oxford Dictionary, some 2,200 words first appear in writing in Shakespeare’s works, and linguist David Crystal says he invented about 1,700 of them. These are aside from the phrases mentioned above. 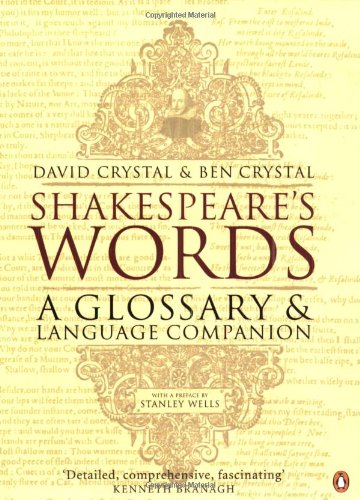 Crystal and his son, Ben, run the online site Shakespeare’s Words, and has published with Ben, a book of the same name – an essential and delightful work for Shakespeare aficionados, both lay and scholarly. It’s the sort of book that you can just open at any page and read to discover all sorts of wondrous and quirky words and usage.

Just to digress for a moment: Shakespeare’s works contain about 15,000 different words; Milton’s works about 8,000 and the King James Bible 5,642 (excluding proper names). Some people credit Shakespeare with a vocabulary of 27,000-30,000 words, but this estimate, others argue, is…

…inflated to the extent that it counts all variant forms of a word separately: so Shakespeare doesn’t just get credit for knowing the word “ask,” but also for knowing how to conjugate it (ask’st, asks, asketh, asked, asking) — six for the price of one. If one only counts the kind of different words registered as dictionary headwords (ask as a noun and ask as a verb, for instance), the size of Shakespeare’s vocabulary shrinks to between 17,000 and 20,000.

David’s Shakespeare’s Words site tells me the word porpentine shows up seven other times in Shakespeare: Henry VI Part 2, five times in The Comedy of Errors and once in Troilus and Cressida. Only in Hamlet, however, is the animal fretful.****

(David and Ben also run the Shakespeare Portal, an impressive resource for readers and scholars alike.)

But why fretful? Crystal’s glossary tells us the adjective has numerous meanings: “1. angry, irritated, ill-tempered and 2. irritating, aggravating, gnawing.”  The Merriam Webster dictionary tells us fretful is “upset and worried; not relaxing or restful.”

Well, gnawing is what porcupines do. All rodents gnaw. But porcupines are generally calm and peaceful, rather than irritated or ill-tempered. In Shakespeare’s day, porcupines were believed (wrongly) able to shoot their quills when threatened. Perhaps that made people think they were nervous creatures; fretful.

fretful porpentine, easily irritated porcupine, which in its nervous excitement erects its bristles; Skeat shows that the animal had formerly two very similar names, “(1) porkepyn, shortly porpin, easily lengthened to porpint … and finally altered to porpentine … and (2) pork-point, porpoint” … = “a ‘pork’ or pig furnished with points or sharp quills,” and that the modern porcupine is from the M. E. porkepyn from O. F. porc espin, the pig with spines, ultimately from Lat. spina, a thorn.

Some editions of Shakespeare (Pelican most notably) write it as: fearful porpentine. Perhaps that is a better word, a more technically correct one.

Fearful, we learn from Crystal, appears 97 times in the plays and five times ion the poems. The word, he writes, means both “1. timid, timorous, frightened, full of fear,” and “2. causing fear, awe-inspiring, terrifying, alarming.” The porpentine would likely suit the first definition best, since porcupines hardly cause fear, although are often the objects of respect, as many unfortunate dogs know.

More exact, fearful might be, but it trips less entertainingly over the tongue, is less sticky in the mind. I prefer fretful. And Shakespeare’s porpentine over the newer porcupine. After all, what conversation can you interrupt, how will you send readers or listeners scrambling for a dictionary with “fearful porcupine”?

9 I am thy father’s spirit,
10 Doom’d for a certain term to walk the night,
11 And for the day confined to fast in fires,
12 Till the foul crimes done in my days of nature
13 Are burnt and purged away. But that I am forbid
14 To tell the secrets of my prison-house,
15 I could a tale unfold whose lightest word
16 Would harrow up thy soul, freeze thy young blood,
17 Make thy two eyes, like stars, start from their spheres,
18 Thy knotted and combined locks to part
19 And each particular hair to stand on end,
20 Like quills upon the fretful porpentine:
21 But this eternal blazon must not be
22 To ears of flesh and blood. List, list, O, list!
23 If thou didst ever thy dear father love—

Note that some editions of the play (i.e. Pelican) write it as “each particular hair to stand an end/Like quills upon the fearful porpentine.”

** From The Arte of English Poesie, The Second Booke. Of Proportion Poetical, by George Puttenham, 1589:

For the Purpentines nature is, to such as stand aloofe, to dart her prickles from her, and if they come neare her, with the same as they sticke fast to wound them that hurt her.

*** From Jeeves in the Offing, Chapter 2, Bertie speaking to Jeeves:

Odd that he [Hamlet’s ghost] should have said porpentine when he meant porcupine. Slip of the tongue, no doubt, as so often happens with ghosts.

From an opinion piece in The Telegraph:

Sometimes the guard – of seeming to think all the Shakespearean quotations on Jeeves’s lips are the man’s own words – slips, and Bertie picks up his servant, as with the often-repeated allusions to “quills upon the fretful porpentine”. “You’re sure it’s porpentine?” “Yes, sir.” “Very odd. But I suppose half the time Shakespeare just shoved down anything that came into his head.” Edwin later puts a hedgehog in Bertie’s bed – it is invariably referred to as a porpentine.

It also gets mention in Thomas Pynchon’s 1963 novella, Under the Rose.

Fretful appears only in three other plays, according to Crystal: