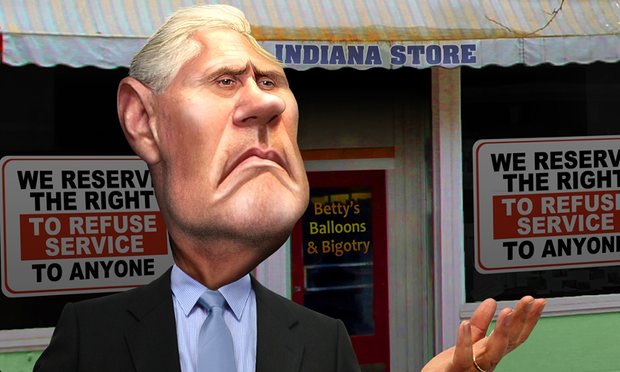 I see Donald Trump’s plan to utterly eviscerate the Republican Party is working very well. Just look who he picked as his running mate: possibly the only white man more bigoted, vile, close-minded, racist and misogynistic than the passel of presidential candidates Trump bested earlier.* Brilliant.

You couldn’t do more than that to alienate the remaining American intelligensia, the moderates, the women, the Latinos, the blacks, the Jews, the Muslims, the gays… now pretty much every social, racial, educational and cultural group has an opportunity to be offended by Trump and his potential Veep all at once.

Now, although pretty much everyone with an IQ over 60 has long since left the party, the remainder are gathering together in Cleveland. Imagine a whole mob of America’s most illiterate, racist, gun-toting, fanatically religious wingnuts stuffed into a stadium where they can feed off each other’s ignorance and hatred.

I expect once it’s packed, Trump will have it sealed, pumped with liquid nitrogen and everyone inside frozen. It will then become a museum of American bigotry. What other choices does he have?

Trump has managed to squeeze out support from two of the top GOP weasels – Mitch Connell and Paul Ryan, whose allegiance to the NRA rises far above anything they feel for the American people or state. Tepid support, true, but if these two sellouts say yea, then you know the NRA is saying yea, too. After all, puppets only dance to the pull of the strings.

Along the way he managed to remove the spine from presidential hopefuls Rick Perry and Ben Carson and get them to stand up and in Soviet-show-trial style, endorse him at the convention. A masterpiece of showmanship that even Stalin couldn’t have bettered. Genius.

All Trump needs now is uber-oleaginous Ted Cruz to endorse him, and his trap has sprung. Get Cruz and all the rest of the top sleaze to Cleveland and zzzzzzap! They’ll all be frozen in ice for all time. And good riddance, too.

Sadly, both of the former Bush presidents will be sitting out this event. One suspects George W wanted to attend, but is still trying to figure out how to work his GPS…
Over the last few decades, the Republican Party has slid into the quicksand of rightwing intolerance, fundamentalist Christianity, sexism, racism, misogyny, infantile economics that favour the elite and punish the middle class, and fervent militarism designed to rake in huge profits for arms manufacturers and oil companies. All the while they have been egregiously selling their elected members to corporate and lobbyist bidders.

And not even the highest bidders: the GOP will sell their vote to anyone with a buck. But first place has always gone to the NRA; the GOP delights in promoting gun violence and celebrates every mass shooting because gun sale spike after each one.

But as far as these rabid wingnuts have gone in their race to the bottom, it hasn’t been enough to cause the party to implode like some black hole of ultra-dense matter. Even Sarah Palin, queen of the ultra-dense, couldn’t achieve that, although she continues to try. Until Donald Trump came along, the party simply kept hitting itself in the face with its ideological two-by-four without achieving the expected results.

The canny entrepreneur realized that all it needed to slip into the abyss was a push from the outside. So he entered the presidential race.

Now I suspect his original plan was merely to show Republicans how seriously crazy their platforms had become, by exaggerating their own words and actions through hyperbole and satire. Comic relief, after which people would realize their madness and settle down to being good, caring Americans again. Like some Zen monk wacking a meditating student to spur the passage into enlightenment.

But it must have been clear from early on that instead of shocking GOPers into self-realization, it spurred them on, deeper into the woods of political madness. They loved everything he said. They wanted more of it! So Trump made more outrageous claims, made more racist, elitist and isolationist statements. He contradicted himself, insulted his opponents, attacked women… all to no avail. Far from turning away in disgust, the Republicans lapped it up.

Like rats, the party faithful followed their Pied Piper. So now Trump pulled out his new magic flute: Mike Pence. Pence is probably the nastiest, least likeable human being to hold office in the USA today, drawn from the very bottom of a very large pool of corrupt, mean-spirited, ideological bottom feeders who swim in the benthic zone of American politics. It should have shocked the GOP into awareness that this was a train wreck.

Yet lo and behold, the rats are still following as Trump leads them towards the cliff, hand in hand with Mike Pence.

Observers had thought the party faithful had enough morality left to react with horror and disgust at the choice, finally breaking the magic spell and seeing the emperor with no clothes. It should have discredited everything, the final disgrace.

But no, they didn’t reject Trump or his running mate: they embraced them even tighter. Theyloved the outfit! The party’s only candidates are the wet dream of ever neo-Nazi and gun-toting illiterati in the country.

Trump’s only option is now to lead them over the edge. He can’t win: as stupid as the party has become, there aren’t enough stupid people in the USA to elect him.

And with him falls the Republican Party. Once the party of Lincoln and Eisenhower, it has been tarnished and tattered since the postwar days when Nixon and his fellow opportunists took control of the leadership for their own nefarious goals. And this is the sad result: the party of Ted Cruz and Marco Rubio and, yes, Ted Pence. The party of Small Minds, Self-Gratification, Extreme Bigotry, and Votes for Sale.

One can only hope Trump’s cunning plan works and the GOP implodes so thoroughly that, like Humpty Dumpty, it can never be put back together again.

* Fiorina and Carson notwithstanding. Token candidates who don’t have a snowball’s chance in hell don’t count; and neither were exactly top of their class in the brain category.

One Reply to “A cunning plan”

“All who contribute to the overthrow of religion, or to the ruin of kingdoms and commonwealths, all who are foes to letters and to the arts which confer honour and benefit on the human race (among whom I reckon the impious, the cruel, the ignorant, the indolent, the base and the worthless), are held in infamy and detestation.”

— Niccolo Machiavelli, The Discourses: I, 10