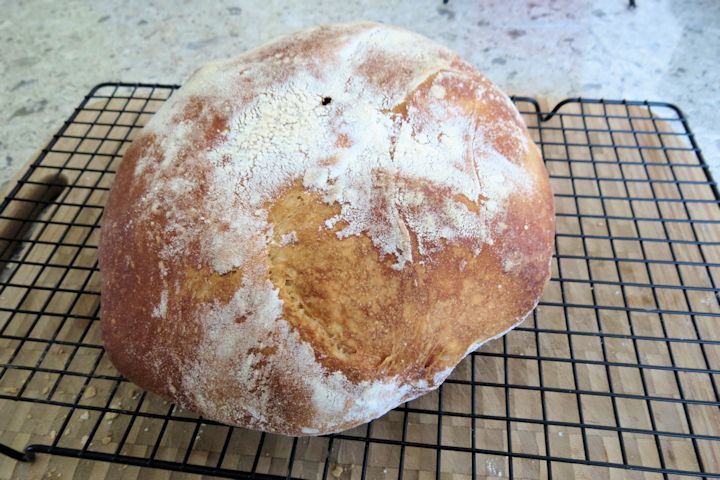 April has begun with three loaves of bread; generally successful efforts, although there’s still some tweaking to do with the recipes. As always. But I’m encouraged to try more – and of course experiment more with recipes and ingredients.

The first loaf of the latest batch was an artisan loaf made at the tail end of March. Started with an overnight poolish and the standard artisan recipe I’ve been using for a while now (derived from one found online). All unbleached white flour in the mix. A little less salt than was called for, but otherwise pretty basic bread.

The result was excellent. A little canned applause might be inserted here. 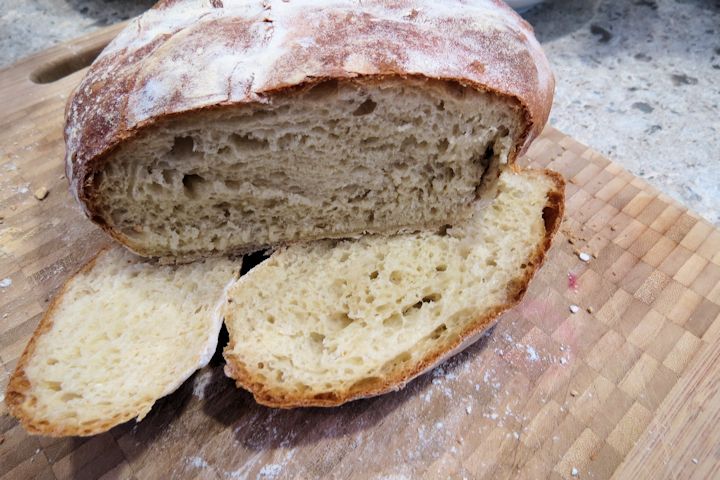 As you can see, it held a good shape, and rose well without flattening. It shows a nicely aerated crumb. Crust was fine; a little crunchy and chewy at the same time.

I was extremely pleased by this loaf – look, texture and taste all combined to produce one of the best loaves I’ve made to date. It didn’t last long: we ate it in a few days.

I might let it rise a little longer next time to boost the aeration. Or perhaps increase the hydration by a percentage point or two. Both can improve aeration. But too much water and the dough is too wet to hold its shape during the rise. 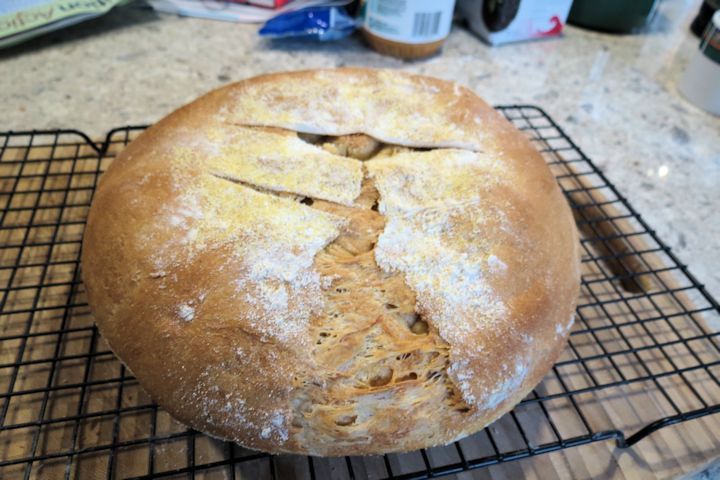 The second loaf was another artisan-style boule, but this time I went back to the “Artisan Bread in 5 Minutes a Day” master recipe. And I stuck to the recipe – although I reduced all the ingredients to 2/3rds of what was called for, to make one large loaf rather than the two smaller loaves in the book.

It wasn’t as good as this recipe has produced in the past. I think it had a lot to do with the salt.

The recipe calls for 1 1/2 tablespoons of coarse (kosher) salt. That’s a lot. Even reduced for my smaller effort, it’s still a full tablespoon of salt for 4 cups of flour. I hesitated, but in the end opted to use what was called for.

My mistake. I’ve tended to reduce salt in most recipes in the past and had good results. 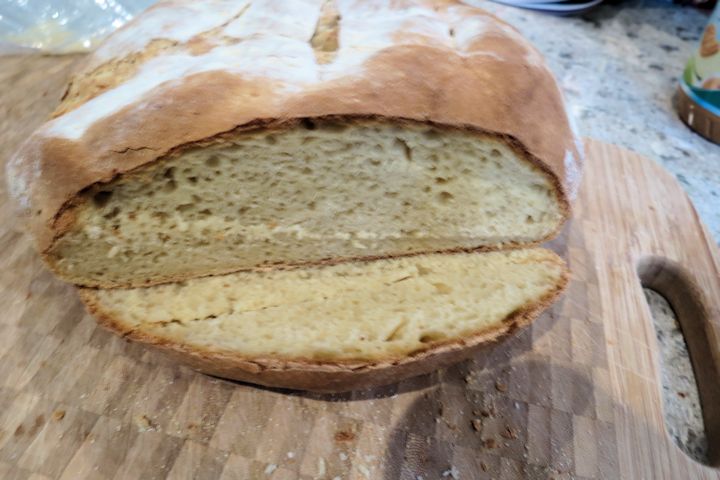 Salt adds to the flavour, but it also inhibits yeast growth. Dough doesn’t rise as well when the salt is high. I suppose to compensate, the authors call for a full tablespoon of yeast (or rather 1 1/2 tbsp for the original recipe). That’s a huge amount.

The recipe also calls for putting the yeast and salt in the warm water before mixing. Again, I did what it said, but I think that’s another mistake. Putting yeast in the water is meant to awaken it, to start it growing (putting a little flour in the water also helps that). I believe that much salt in the water will inhibit, even kill some of the yeast.

The dough is allowed to rise, untouched (no folding or kneading) for a few hours, then placed overnight in the fridge where it continues to ferment but much more slowly. The result was a dense bread, stubbornly resisting rising.

And the final loaf was way to salty for either Susan or my palette to appreciate. So I decided to try that one again, but with reduced salt. 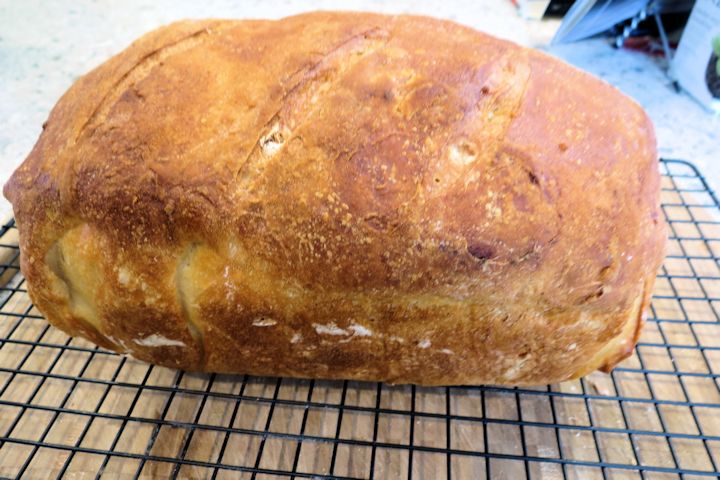 Second time around, I reduced the salt to 1 teaspoon – about 1/3rd of what was called for in the recipe. Maybe a trifle too little. Perhaps 1/2 tablespoon would have worked better. It’s a guessing game between personal taste and what is the most efficient for the bread. Too little and the yeast rises unchecked – so it becomes important to cap the amount of yeast in the recipe. Which I also did, at one teaspoon as well.

I put the salt (a finer sea salt this time) in with the flour mix, not the water with the yeast.

The result of the second baking was excellent, although not the artisan-style bread I expected. More like a home-style sandwich loaf.

Nice, full rise, nice crumb and consistent crust, although the crumb was perhaps rather too light and fluffy. And this time I baked it in a pan, not on the oven stone. 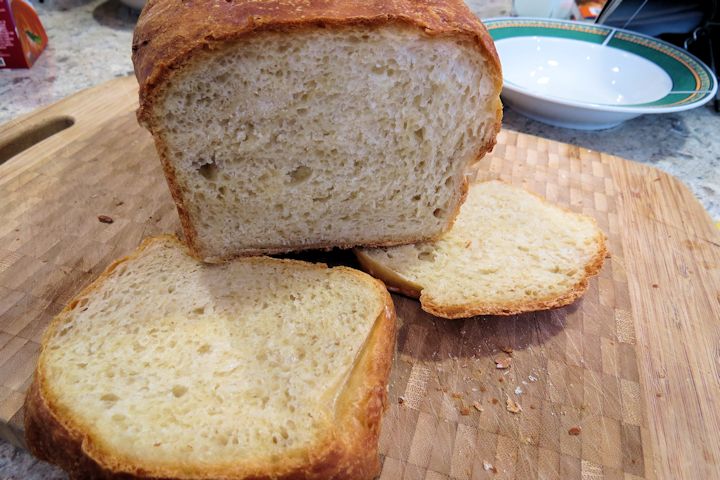 I’m pleased with this loaf although it’s not quite what I planned. Did I mention that I added some diastatic malt powder and gluten to the dough mix? Yes: the malt for the sugars and the acceleration of the yeast growth (and the sugars caramelize the crust nicely as well as help the bread last longer); the gluten to give the high-hydration dough extra elasticity.

The “5 minute” recipe is okay, but even if the ingredients are similar I still prefer the earlier recipe and technique. I think next time I’ll try to combine the two: try doing some folding and stretching of the dough during the initial rise before relegating it to the fridge overnight. I want to build those gluten chains to hold the dough together better for the rise and oven spring.

And maybe increasing the salt a teensy bit from what I reduced it to. Otherwise, it was a successful loaf.

But this particular recipe I think I’ll keep – and use if for a cheese bread next weekend.

“He who is the cause of another becoming powerful is ruined; because that power has been brought about either by astuteness or else by force, and both are distrusted by him who has been raised to power.”