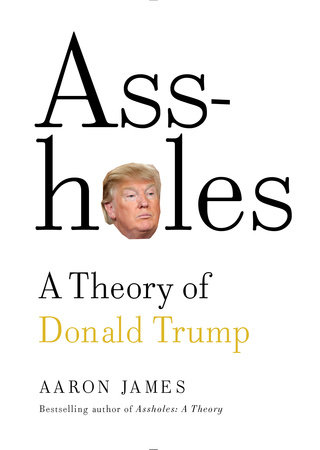 Back in 2014 I reviewed a book by philosophy professor Aaron James called Assholes. A Theory. I discussed how his study related to politics and politicians, particularly those who call themselves “A-type” personalities (including one or two on the local council).

Well James wrote another book, really an addendum to this one, titled Assholes. A Theory of Donald Trump. It was smaller than your average paperback, and a mere 130 pages, perhaps 20,000 words long. And since it came out just before the 2016 presidential election, it really doesn’t deal with the startling number of asshole things – the many, many asshole things – Trump has done since then. Perhaps that might come in a sequel. A much larger, longer sequel. A multi-volume work it would have to be, to really do him justice.

I picked the book up this weekend during my visit to Toronto, and read it cover to cover. Sure, it’s a bit dated but it still has meaning in today’s politics. And it relates to our own local council even more than the first book. (Check out the author’s website, too.)

James didn’t merely pen a screed against Trump. That’s been done, is still being done by savvy media and political commentators worldwide. Trump is an easy target for so many reasons, not least of all because he lies often and aggressively and is both ignorant and a clown. Nothing you don’t already know about him. Nothing the whole world doesn’t know about him.

No, this is much deeper than a single asshole, even one that big and that pompous. It – like his earlier book – is reflective of a whole culture of the ignorati that has risen worldwide. Trump is merely the most visible icon of darkness as the intellectual lights go out.

James examines a trend in politics that has seen the rise to dominance of similar assholes in numerous nations. And along with the asshole in charge comes a parallel government and bureaucracy that sees the ignorati, the illiterati, and the anti-intellectuals elevated to power. As we see in the USA, bigoted, theocratic, right-wing dictatorships and oligarchies are emerging in what were once democratic nations. More and more of them are looking and acting more and more like North Korea or Iran these days.

Turkey and Britain come to mind as ongoing and accelerating national sinkholes of assholedom. France and Germany seem to have escaped it for now, but one wonders for how much longer. Greece seems to have embraced it. Russia has been steeped in it since Communism fell. China still has it. We had significant assholedom in Canada under Stephen Harper; there was hope that we had progressed beyond it under the Trudeau government, but it’s returning as one promise after another gets broken by the Liberals.

And it’s not simply the national or federal stage where assholes reign. They seem to be ubiquitous in politics at all levels. Provincial politics stink of them, particularly in BC and Ontario. It happened across the province in the last municipal election, even locally, where they too they reign. James writes:

The asshole is the guy (they are mainly men) who systematically allows himself advantages in social relationships out of an entrenched (and mistaken) sense of entitlement that immunizes him against the complaints of other people.

Wow. Doesn’t that sound like the perfect capsule description of The Block on our own council? Uncannily accurate! Sense of entitlement? They have it in spades. Don’t care about what others think or say? That’s them! But wait, he cuts closer to the bone when we writes:

The asshole acts out of a firm sense that he is special, that the normal rules of conduct do not apply in his case.

Just think of all the secret, closed-door machinations this term, the breaches of ethics, of public trust, of laws, of policies and protocols that happen every week under The Block. Think of the conflicts of interest, the sole-source contracts handed out like party favours, and the stench of entitlement that infuses the council chamber. Think of the public blocked from important debates and issues by their inveterate secrecy. His words resonate strongly for local council watchers. It reads eerily like James was watching them on Rogers TV, doesn’t it?

Trump’s driving concern, James writes is not “responding to reality, but winning, in a winning performance.” Consider those words when you ponder The Block’s dealings with Collus-PowerStream. They and the administration have refused since day one to let facts interfere with their attack on the utility. They have the same attitude towards the airport and our our hospital. As long as they get their way, as long as their ideology wins, they have no interest in the realities of the situations.

Ideology is what James describes as “collective bullshitting.” And The Block does that very well, and very often. All the time, in fact. For example, we’re still being told by councillors they are just “kicking tires” over the sale of our public utility when everyone knows they are actually engaged in negotiations with EPCOR. Behind closed doors, of course.

In a similar vein, author Harry Frankfurt wrote in his 2005 book, On Bullshit,

“Bullshit is unavoidable whenever circumstance require someone to talk without knowing what he is talking about. Thus the production of bullshit is stimulated whenever a person’s obligations or opportunities to speak about some topic are more extensive than his knowledge of the facts that are relevant to that topic. This discrepancy is common in public life, where people are frequently impelled — whether by their own propensities or by the demands of others — to speak extensively about matters of which they are to some degree ignorant.”

Just listen in on any council meeting (not committee meetings because The Block won’t let them be televised) and you’ll hear seven people who clearly are out of their depth talking bullshit. Of course they don’t do it a lot in public because they are too secretive to say much that would invite public scrutiny and scorn. Still, one has to assume the level of bullshit rises to appropriately stratospheric levels in their innumerable closed-door meetings.

So how do they get away with it? Well, in part it’s because, as James writes, we let them:

The asshole profits from a deep feature of morality. It is generally permissible to forgive…

Moral people want to forgive others, to redeem them. And while that seems a strength for a civil society, assholes exploit this as a weakness. They keep doing wrong, keep hurting others, keep destroying our community because they know people will keep forgiving them. Up to a point, James says. There are limits. For The Block, their limit was the crushing of the hospital redevelopment simply to suit the whims of a handful of their followers. The public finally started to take notice and realize what a pack of scoundrels and bullshitters ran this town.

It is also, I believe, because the public cares less about municipal politics than any other level, and it gets less in-depth coverage (and certainly MUCH less investigative journalism) than other levels. The Block take advantage of this by doing most of their conniving in secret, so even if we had good local media, the public would not know what they’re up to. Plus people are easily distracted by their smartphones, their shopping, their daily lives, their kids, jobs, what’s on TV, what beer to choose, what team to root for… it’s difficult to make them care about the machinations of a local council.

Some people don’t need to forgive because they basically don’t give a shit to begin with. It takes a big event, a big shock to get their attention – which is why the people behind The Block organized the complaints to the OPP last term over fake issues. It worked, even though it was all a setup, all lies. Assholes excel in dirty politics. But by now everyone here knows who did it and why.

Not all of the book is relevant to our council, of course. James meanders a bit through American trade policies, through the presidential primaries, through visions of democracy, past Hobbes, Rousseau and Adam Smith. It gets a bit dry towards the end, but I’m sure you’ll agree that what I’ve commented on here has relevance beyond Trump, and reaches here to the heart of our own community.