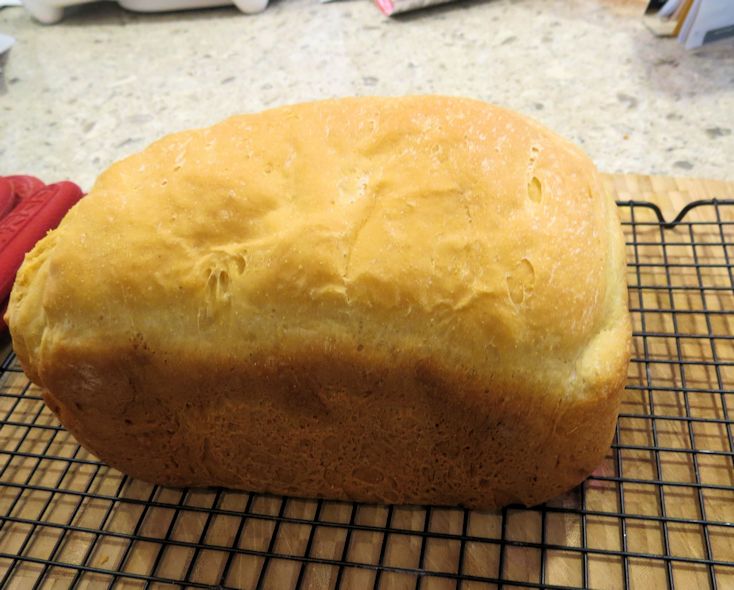 Unlike my previous efforts to tinker with bread recipes, I used the basic, printed 1.5-lb. recipe without any alterations this time (not even in the salt). Medium crust setting, basic (white) bread menu selection. The results were good, if not spectacular.

The recipe calls for 1/3rd cup of cornmeal. I used a commonly-available, supermarket brand, the sort I often use for dusting pans, parchment paper and the pizza peel, to prevent sticking. However, it didn’t really give the bread a noticeable corn flavour or the mealy/gritty texture one expects in corn bread and muffins.

I later found a bag of Bob’s Red Mill medium grind cornmeal which is less refined and will likely impart more flavour next time I make this bread, and likely heighten the texture.

Bob’s Red Mill products are available at several local supermarkets. I don’t know what sort of cornmeal is available at the local Bulk Barn, but will check next time I’m there. 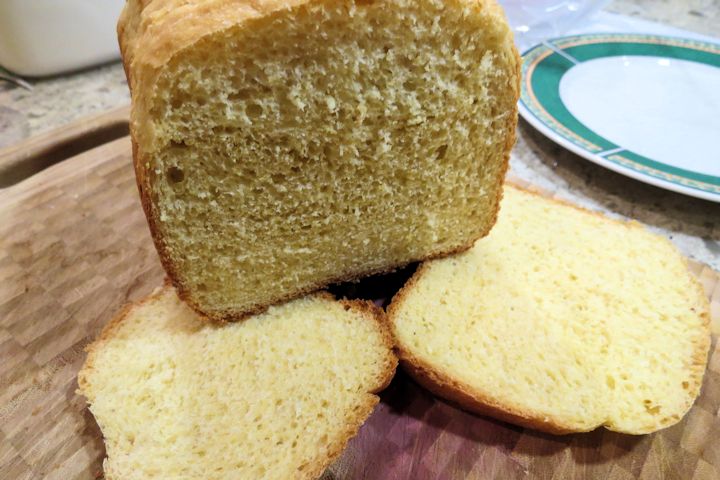 The bread came out with a nice, light and distinctly yellow crumb, consistent throughout the loaf and evenly cooked. It had a light top crust, but a bit crunchier side and bottom.

The flavour is pleasant – in part because the recipe called for an egg (and I had some free-range eggs on hand, which are always tasty), 1 tbsp honey, and 1/4 cup skim milk powder. These add to both the texture and taste.

We tried the bread with soup one day, and with beans-on-toast the next. The cornmeal makes for a crumb that doesn’t stay together as well as an all-wheat bread, so it has a tendency to break apart. It toasts well, however. This week we will likely finish the loaf with some four-bean chili (not, of course chili con carne, which is Texan, not a Mexican dish) one night for supper.

Next time I will try some variations with this bread, aside from using the better cornmeal. I will look up cornmeal recipes online, too, to see what amounts others recommend. I don’t know if 1/3rd cup is sufficient, or if additional cornmeal will make the crumb even more friable.

I may add some gluten flour to boost the stickiness; this may avoid the tendency for the bread to crumble. I may also try buttermilk instead of water and milk powder. I’d also like to try substituting agave syrup or even molasses for honey, and maybe even some Osprey bread flour (from the K2 mill in Beeton) for a portion of the unbleached white. 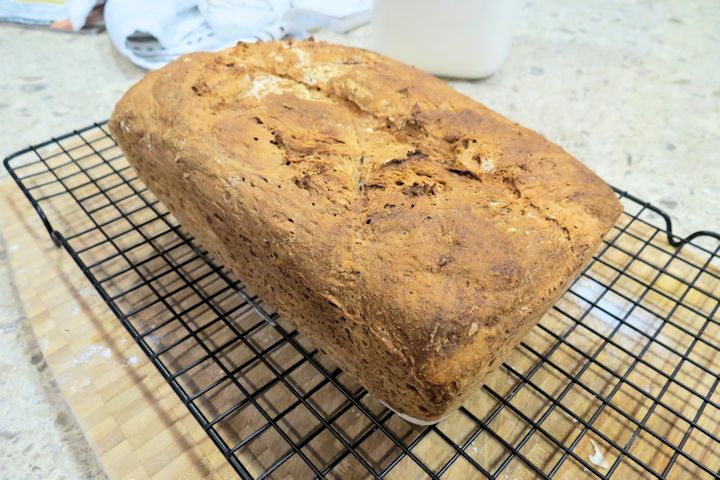 My other bread baked last week was an odd chimera baked in a pan in the oven: I mixed about equal amounts of a poolish (made with unbleached white flour) and my countertop levain in a dough that combined Red Fife, rye, Osprey and unbleached white flours, to make what I hoped would prove a tasty sandwich-style loaf with great texture.

Well, it was tasty, but still a bit more dense than I hoped for. Not bad, but a mild disappointment. It rose initially, but fell towards the end.

I suspect it was a tad over-hydrated, so couldn’t maintain the shape.

I used the gas oven as my proofing/rising box. I turned it on for a minute or two, then off so the space was warm but not hot. I let the bread rise in there between folding and stretching. And it seemed to do well, growing as expected. But it seemed to fall somewhat when I transferred it to a pan for the final rise. And it seemed stickier than I planned. I tried to guesstimate the hydration levels of the levain (the poolish was 100%) when making the dough, and perhaps underestimated, so the dough may have had too much water. 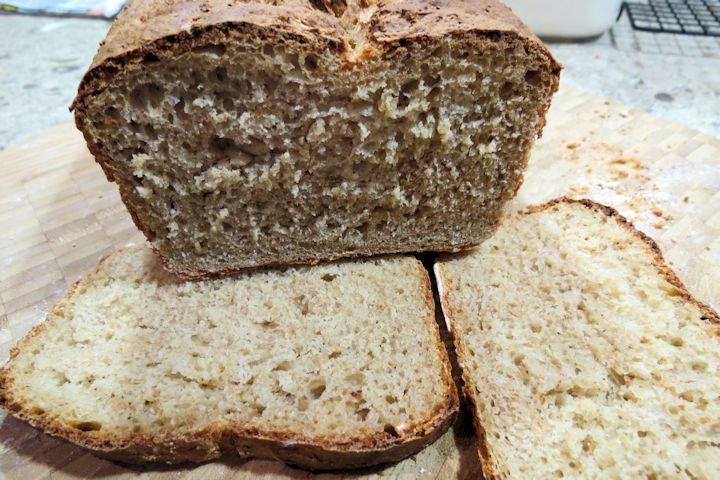 The combination of ingredients gives it a really nice flavour, with a pleasant mouth feel; not quite as textured as the earlier breads I made with the Osprey flour, but moreso than your average store-bought loaf. Good on the nose, too.

I found the upper crust a tad too crisp (it was the exposed portion because I baked the loaf in a pan to try and maintain the shape), so I stored the loaf in a plastic bag – this helps soften tough crusts, and keep breads from drying out too quickly. The only thing you need to watch for is not to put the bread into the bag before it’s finished cooling. the condensation in the bag will make the crust soggy.

I like this bread’s taste – it does well with everything so far, and toasts very nicely; but the cross-section is still a bit too small for sandwiches. I tried a similar levain-poolish bread, but with less adventurous mix of flours, the previous week. It is also delicious. 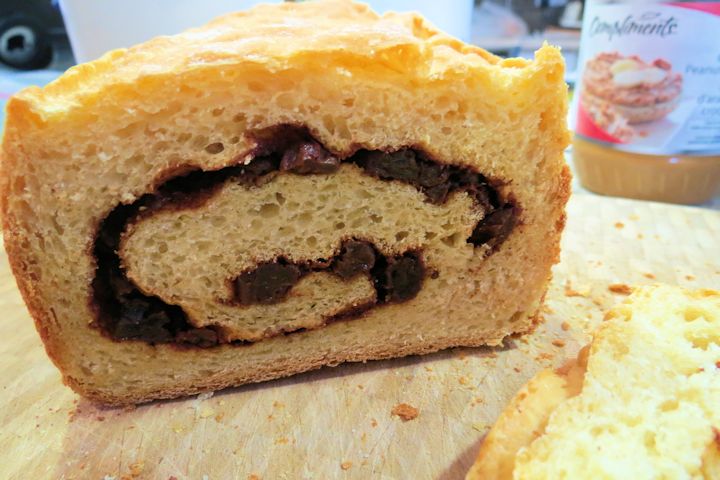 I will have to experiment further with the mixed poolish-levain idea (I have a levain growing on the counter as I write this for another attempt later this or early next week). I will reduce the water, and put more time into the stretch-fold periods. I am beginning to suspect I don’t do as much of these steps as I should, or perhaps not as vigorously as I should, so the gluten strands don’t get to form as thoroughly as they should.

This weekend, we finished the last of my cinnamon-raisin swirl bread (above). That was a success, rich in flavour, but like all of my breads, could use a little refinement. My thought is to incorporate the raisins in the dough, not layered on top of the cinnamon butter when I make the swirl. That way, they don’t fall out when sliced, and don’t keep the dough sections as widely separated when baking. 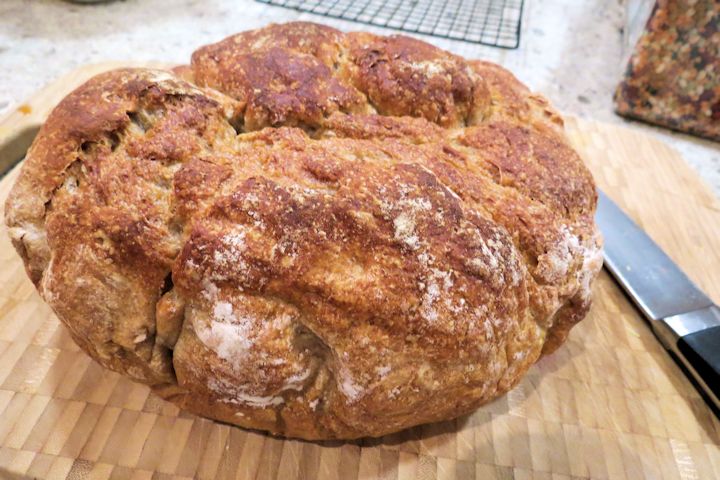 We almost finished the Dutch-oven-baked sourdough-poolish miche from Jan. 26, too (pictured at right). We would have used it up, but I baked the two loaves, mentioned at the top of this post, and the miche got pushed to the side. It’ll be used up in peanut-butter-on-toast this week. It too was very tasty and one of my favourite flavours of bread to date. However, it needs more texture (hence the second experiment, mentioned above).

Yes, I know: it also needs a better shape. The odd shape came because I decided at the last minute to transfer it from the pizza peel to the Dutch over and kept it on the parchment paper, rather than try to wrestle it into the pre-heated (~400F) cast iron pot. Those indentations are from the paper crinkling in the pot. Mea culpa.

This week’s challenge: to come up with another recipe for Irish soda bread. I made a soda bread, late last year. It was fair, but not great. I used a recipe in a small book that called for bread (white) flour, but I should have used some whole-meal flour, at least in part. I think I can use either Red Fife or the Osprey organic flour as a substitute. Maybe throw some oatmeal into it, too.