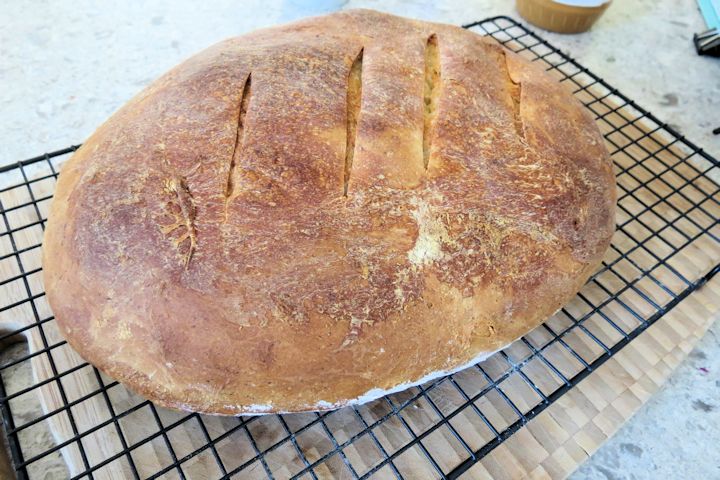 The past month has seen the rise, fall and rise again of my bread making efforts.

Mid-month, in April, I was having some success making sourdough breads and was looking at trying some experiments with herbs and other ingredients. Maybe look at other specialty breads, too.

But late in the month I tried a cheese bread in the machine – my first cheese bread, using a recipe in the 300 Best Bread Machine Recipes book. It was a failure that cost me a confidence and set me to lying awake at night wondering what I did wrong.

But then I came back with good loaves – in fact, very good – both in a mixed-sourdough and a handmade cheese bread.

I feel redeemed. Confidence was restored. 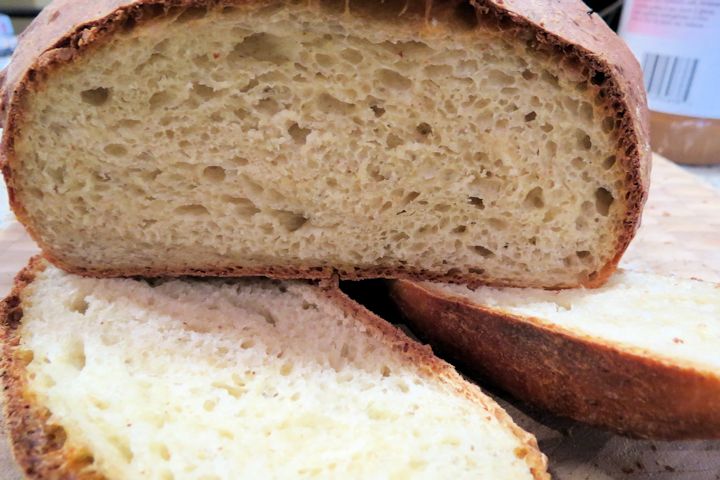 Mid-April I made a sourdough from the levain in my fridge, and no additional yeast or poolish. Entirely unbleached white flour. I decided this time to add more salt than I usually do – almost the amount most recipes call for. The result was a slow rise during the day, but it rose to a reasonable height for the boule. Tall enough for sandwiches.

Crust was crisp, the crumb was a bit dense but not overly so; more like a commercial light rye (and the taste is similar to a rye because of the sour levain). But it cooked throughout to a nice consistency with just the right amount of chewiness.

There was noticeable aeration, especially at the top, although no really large holes. Makes me wonder if I should have flipped the dough over an hour or so before baking; help the aeration on the other side. 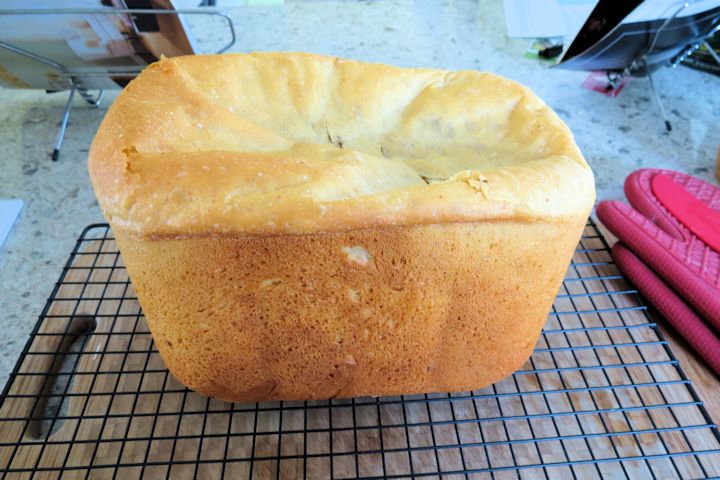 I next wanted to make a cheese bread. Never made one before, but I do like the commercial cheese breads (when they are rich and noticeably cheesy) , so I chose to start with the machine to see what it produced.

The recipe I had called for a cheese-and-onion bread, using dried onion flakes. I’m not a fan of these flakes (usually too salty and often come with extra chemicals I don’t want), and wasn’t in the mood to fry up some fresh onion.

Besides, while cheese-and-onion bread is tasty, it’s dubious whether it goes well with peanut butter – a staple in my diet. I decided to forego the onion for the nonce and just use some pre-shredded cheese – a “taco” or Mexican-style mix. Okay, there are better cheeses, but it was conveniently pre-shredded.

Other than not including the onion flakes, and cutting back the salt a tad, I followed the recipe closely. And the result was – well, awful. 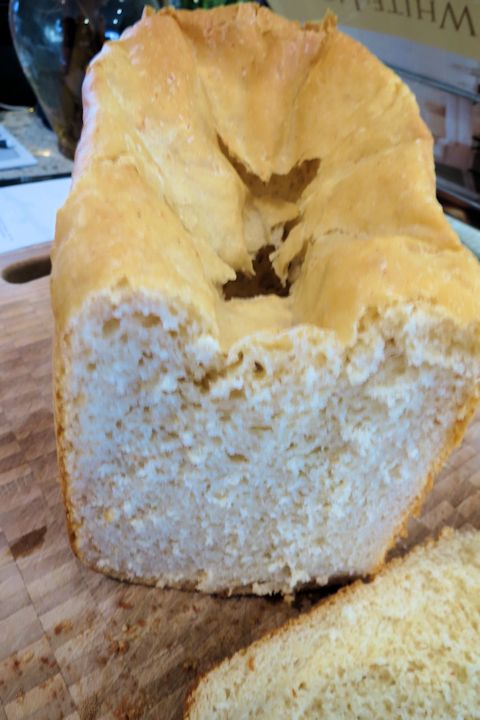 First, the bread seemed to rise along the sides and form a fragile top crust that collapsed mid-baking. The result was an awkward shape with “wings” on both sides of the top and an empty centre. You can see the collapsed top in the photos.

It actually is worse in the middle of the loaf, where the sides get thinner and prone to breaking away, leaving a small square of bread.

The flavour was bland, the crumb was bland and the top quarter of the load essentially bird food. The texture was far too much like a commercial white bread for my senses to appreciate. I never liked that airy-sponge style. I want texture I can feel in the mouth; a chewiness in my breads.

The cheese didn’t come across in the taste; in fact it seemed more subsumed into the overall flavour without contributing anything worthwhile. Clearly the recipe didn’t call for enough or I used the wrong kind. A cheese bread out to redolent of that cheesy comestible (a reference to the Monty Python cheese shop skit).

That was rather a depressing result. The usable portion of the loaf was short, bland and indifferent to toasting. In the end, a rather large portion was strewn on the front garden for the birds. 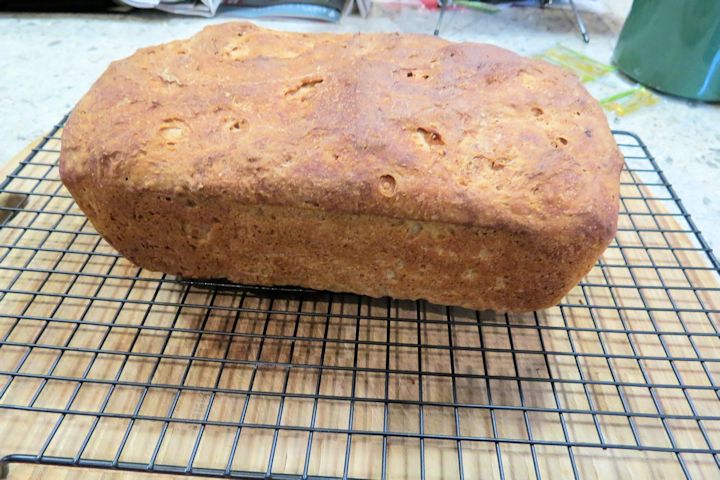 The next attempt was a mixed sourdough, made with a sourdough starter and a poolish that both sat out to rise overnight. The poolish was 100% Red Fife wheat from B2 mill, and the levain was unbleached white flour.

I used about 200g of starter and the poolish was 200g water and unbleached white flour. The next day I wasn’t sure if I had left them too long. The poolish, especially, had deflated somewhat – a sign of yeast exhaustion.

Undeterred, I mixed the two, added more flour and a bit of water to get it to about 63% hydration, added some diastatic malt power, and let it rise in a pan. I actually rose quite well, suggesting there was sufficient life in the yeasts. I baked it for about 30 minutes at 425F. 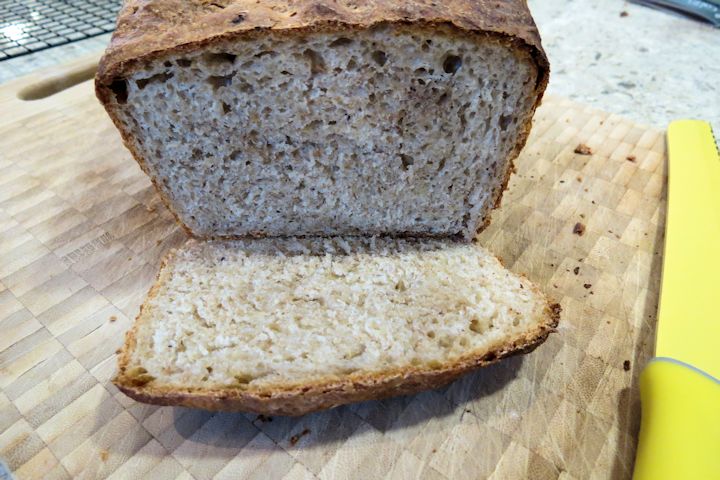 The result was a delicious loaf that has served me well with soups, sandwiches and, of course, tasted with my morning peanut butter.

You can see a bit of my poor mixing in the photo: there were areas where the red fife was more concentrated, creating some slightly browner patches in the crumb.

Nonetheless, it was a great success: tasty (I think I prefer the mix of sourdough and commercial yeast to a pure sourdough bread). It had good texture with  modest aeration and a crisp top crust.

The loaf seemed to rise then fall a bit on one side – the left in the photo. Not sure why, but it cooked thoroughly. 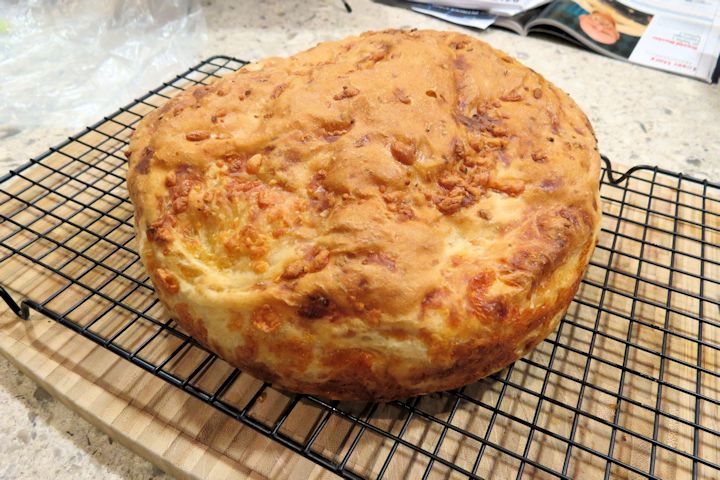 My last and most recent effort was another cheese bread, baked late this week. I started with a poolish using unbleached white flour and some soaked cracked wheat kernels for added texture. I folded and stretched it a few times while it rested,

When it had risen for a few hours, I added the salt, cheese (same Tex-Mex mixture I used earlier, but more than I used previously), more flour and water. I kneaded it for a bit, then transferred the dough to a greased cake pan for the final rise.

By early evening, it was looking ready to bake: into the oven at 425 for 30 minutes. 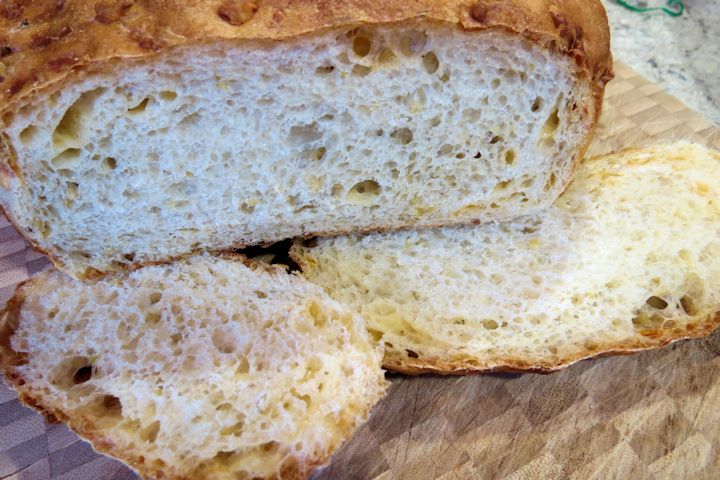 The result – which we tasted today at lunch with some Happy Planet summer pea soup – was wonderful. Lovely in all ways: taste, texture and crust, crumb.

The cheese comes through without being overpowering. Little pockets of added flavour dot the crumb. And it melted beautifully on the crust, adding a bit of extra crunch.

The crumb is light and well-aerated yet still consistent, with a nice mouth feel.

Because it rise in a round pan, it wasn’t terribly tall, but enough I can use it for wide sandwiches, I suppose, if I slice the tomatoes just right. This tasty, well-constructed loaf returned my confidence to making further experiments with cheese (and likely herb or onion) breads in the near future. handmade, not machine made.

I future, I think I’ll try using just old and extra old cheddar to help boost the intensity of the cheese flavour. We have a lovely Welsh Collier cheddar that I think would be stunning in a cheese bread. Or maybe some Wenselydale… or is that just the name of the shop? 😉