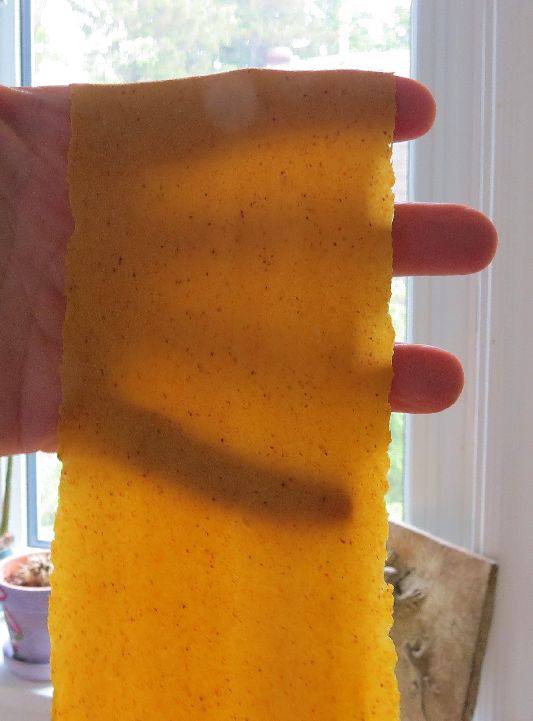 I’m still working on a formula for the perfect pasta dough, trying different mixes of flour and other ingredients to get both the best consistency and taste. And to experiment with texture so the pasta has the best mouth feel. I make fresh pasta once or twice a week now.

My efforts so far have been pretty damned tasty and all but one – a notable one – have been a success as dinner. However, I just got a new book on making artisan pasta, so I have a lot more things to try in the coming weeks.

It’s a fairly good book, albeit thin, but a bit disorganized, and lacks some information (i.e. on drying times and methods). However, it’s one of a very few books with this sort of information and recipes, so it’s worth getting if you’re new to pasta making (plus, it offers information and recipes for other related foods, like Japanese udon noodles and various types of dumpling). 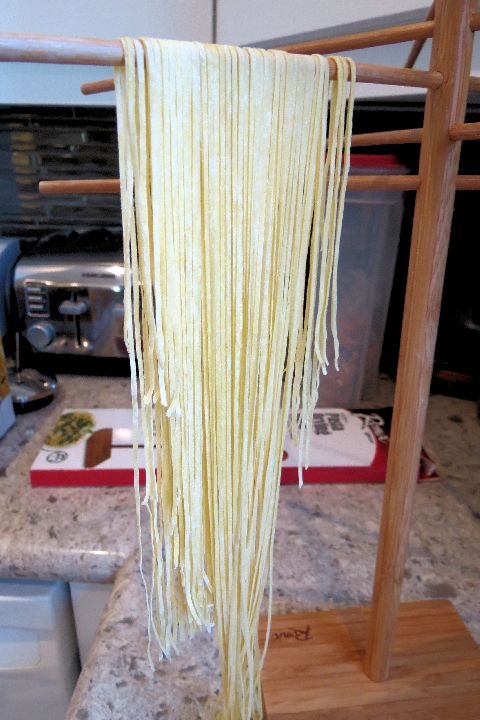 My basic recipe creates enough finished pasta for two. I use 140 grams of flour total, but the mixture differs with each batch. I vary the amount of semolina from none to 20 to, in my last batch, 50 grams. In my latest effort, I rolled the dough a little thinner (setting 6 on my machines instead of the usual 5), so I got more, but thinner pieces of fettuccine (photo on rack, below).

The thinner pasta cooks faster, but is more brittle when dried. It might be better cooked when still a little damp to help avoid breakage. Also, the spaghetti is a bit brittle when dried. I don’t know if the mix of flours contributes to the brittleness, or if one type of flour is more elastic.

The amount of semolina affects both texture and colour – making the dough more yellow than without it, and slightly rougher. When I made spaghetti, I didn’t use much if any and you can see the difference in colour in the photo of the drying pasta, on the right. The photo at the top shows the latest batch with 50g of semolina in the mix. Quite a difference in colour. 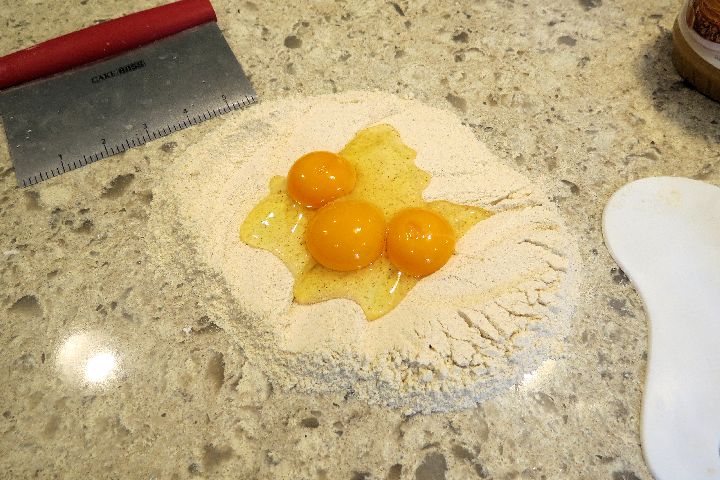 The rest is mostly tipo 00 Italian flour (a very fine grind I found at the local Freshco store in the international foods section), but I also use all-purpose unbleached, especially for the dusting.

I recently bought a bag of Robin Hood’s ‘blending’ flour to see if it worked in pasta – it’s supposed to be a fine grind, but it’s not unbleached. I thought it might be a more-readily available substitute for times I couldn’t find the proper Italian flour. I’ll let you know how it works out. 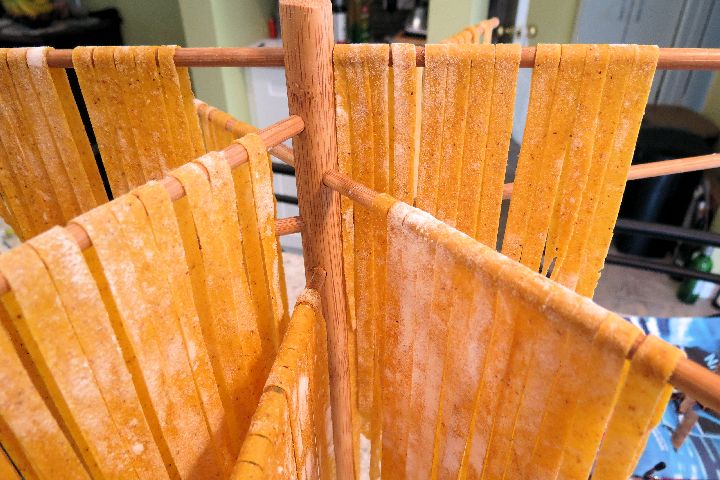 I also mixed in about 20g of light rye flour into my latest batch. Rye and many other flours like spelt and kamut have a lower gluten content, so you can’t use them alone. Just wanted to see if other flours altered the taste. Not significantly this time, but the amount was small. The latest batch is shown on the right, drying. Lovely yellow colour.

I use two egg yolks and one whole egg for my dough. I keep the unused whites until the dough is ready just in case I need more moisture in the mix while kneading. I don’t use water, except to wet my hands if the dough is crumbly at the start of kneading. Haven’t tried a no-egg pasta yet – but why would I? 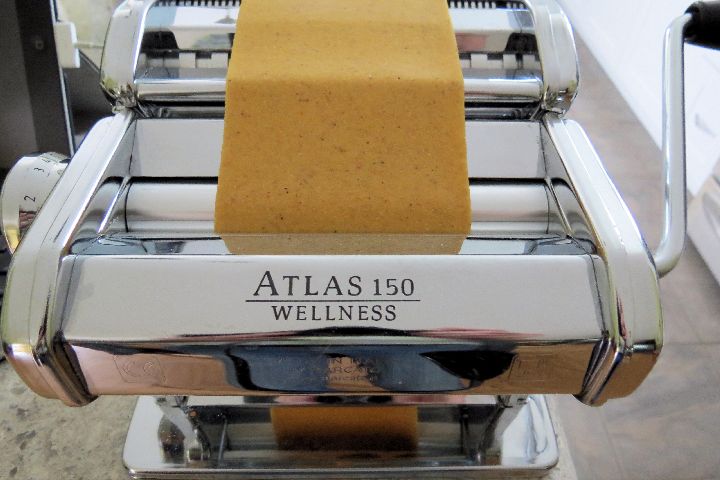 I’ve tried adding other ingredients to the dough; finely-chopped sundried tomatoes (the dry kind; not the ones in oil), chili powder, buttermilk powder, salt and even ground pepper. Most don’t significantly affect the taste because they are  either too little an amount or ground so fine they haven’t much flavour.

I have not yet tried any vegetable content like spinach; that’s coming. I want to try adding a hot sauce, too, but am worried about the moisture content of the dough. Maybe I can find some dried habanero or hot pepper powder to experiment with. However, it can’t be too hot because while I love the heat, Susan’s tolerance for it is much lower. 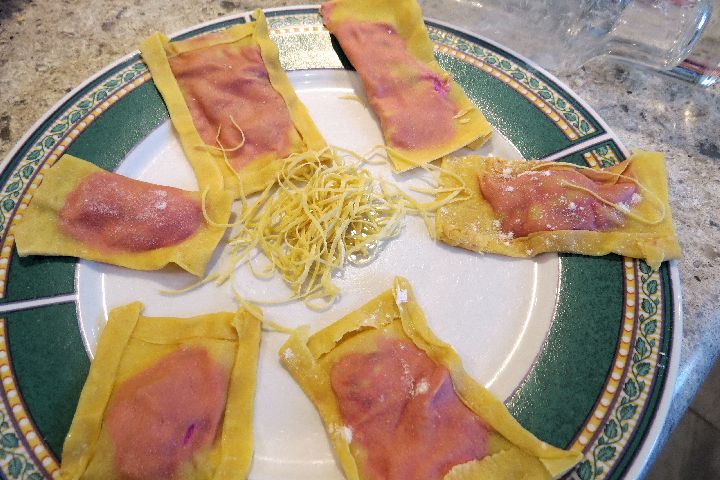 As I said above, I had one notable failure: my ravioli (photo at right). I made a ricotta cheese-beet stuffing, and that was a mistake. The cheese I picked up was the creamy kind and it’s not the best for stuffing (you want the drier kind, usually a cake stored in water; this can be drained and pressed to remove the excess water). The moisture in the filling seeped into the dough and caused it to come apart.

Plus the beet added even more water than I expected and its earthy flavour completely overpowered the pasta and cheese. I need a drier cheese and perhaps a blend of cheeses, with perhaps come sundried tomato or a herb.

But my biggest problem was making the dumplings. I did it by hand, without any tools (not even a cake baster, which you really need to get the stuffing neatly placed and in consistent quantity). I couldn’t get the edges to close, so I tried to fold them: bad idea. Plus I rolled the dough much too thin – setting 7 – which was susceptible to the water in the stuffing, causing it to break.

Overall, a disaster. I ended up tossing it all. I have since read about making ravioli, and ordered a proper ravioli plaque for hand-stuffing – not (as yet) a ravioli attachment for the pasta maker. That may come once I have the process better managed. I also ordered a proper cutter to trim the ravioli once pressed. 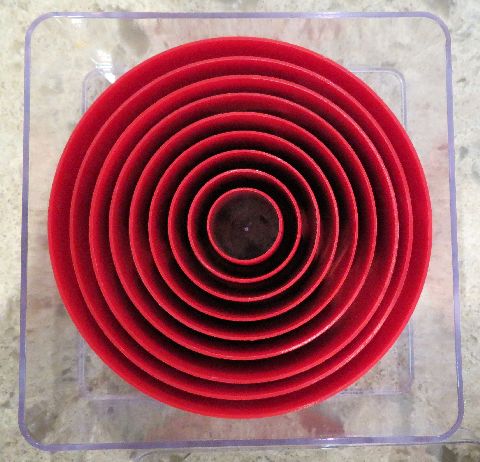 I also bought some circular cookie cutters at a local store, thinking I might be able to use them for dumplings in future. They come as a set of various diameters and look like they’d be good for some of the recipes in the new book. I’ll let you know.

No, I haven’t stopped baking bread while I tinker with pasta. I’ve been baking as well, and will do a separate post on my efforts soon. I haven’t been baking as much because I’ve been sampling some delicious artisan breads at the Collingwood Farmers’ Market. But I have made a few and this weekend plan to bake some more.