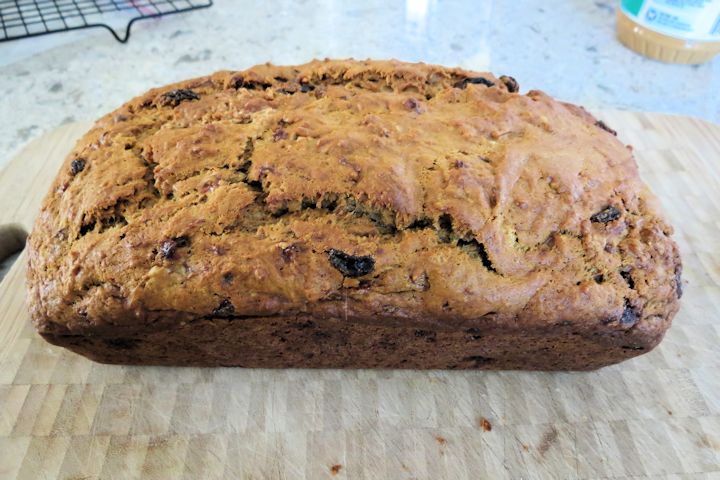 Been at it again this month. Bread making, I mean. You knew that from the image, right?

Several efforts so far this month and March isn’t even half-way through its course. Winter remains firmly entrenched here, and spring – or any time without a thick layer of snow – looks far away. So it’s a good time to be making bread.

First up: banana bread. I haven’t made many fruit loaves – mostly raisin-cinnamon – but have always wanted to try this. And it’s not a yeast bread: rather a soda/quick bread. We had some over-ripe bananas on hand, and I had both the time and a new recipe from the latest (Mar 2014) issue of Canadian Living magazine. 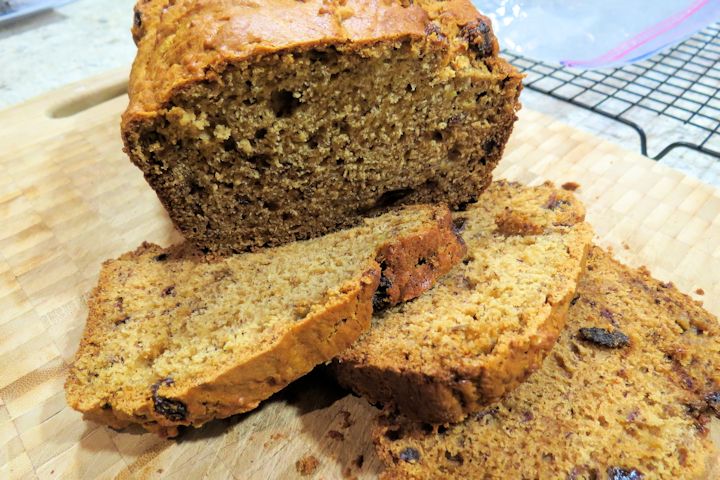 I followed the recipe reasonably closely, but found the dough far too moist. I added more unbleached white flour to thicken it. Not sure if that was a good idea, but the result was good. I baked the loaf in a pan in the oven for about 60 minutes – a long time for bread. Still not sure it rose fully, but it wasn’t hard or doughy: the crumb was firm but soft. I count it a success.

BTW, I’ve been using the Compliments’ unbleached flour of late and I’m not sure about it. I think I may switch back to Robin Hood or Five Roses brand when my bag is empty.

I also added a handful of raisins to the dough, not called for by the recipe. Can’t help but tinker. Next time I will try cranberries.

The result has been a tasty dessert. I haven’t tried it toasted – one portion of the top has a tendency to crumble, so I don’t want it to break apart in the toaster. But plain, with a bit of marg, it’s very pleasant. No, we don’t often use butter, but that’s something I’m mulling over.*

I have an urge to put cinnamon in it next time. Or to tweak the recipe for making a cinnamon-raisin bread instead of banana. Probably would need some adjustments in the hydration, maybe not need the extra flour, too. 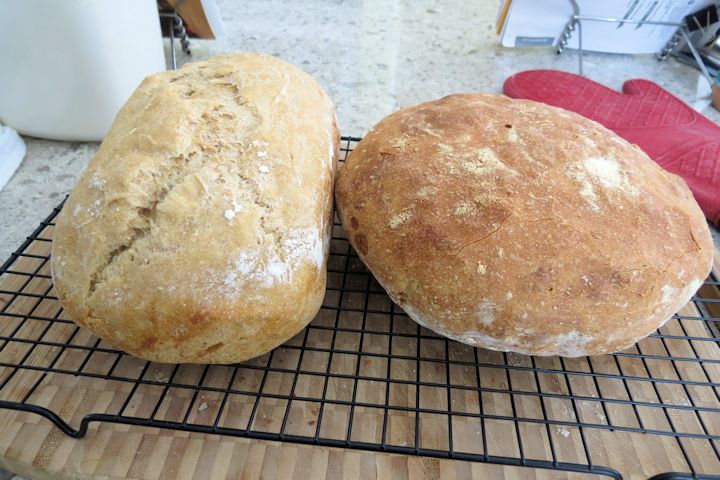 I also made two loaves using the combined sourdough-cultivated yeast mixture I’ve been working with in loaves previous. This uses my levain starter, then adds store-bought yeast to the final dough.

I made a large batch of dough and divided it in two portions of approx 625-50 grams each. One loaf went into the bread machine for baking; the other into the oven. Which is which is clear in the photo. I used the light crust setting in the machine, too, hence the colour difference. In retrospect, I might have lowered the oven temperature too (from 425F) during the baking and used a darker crust setting in the machine.

I was mostly interested in how the machine baked compared to the oven, so I used one mixture for comparison. The bread machine loaf came out taller, of course, because the pan doesn’t allow the dough to spread horizontally. But not significantly. You can see by the photo.

Another thing I tried was to cut way back on the salt. I had expected less salt to encourage a faster, higher rise, but it didn’t and I’m not sure why. And the result was that the bread – both loaves – went mouldy faster than any other bread I’ve made yet. I suspect the salt has something to do with that, but of course there might be environmental effects, too. With a sudden warming one day, there might have been more spores in the air that day. 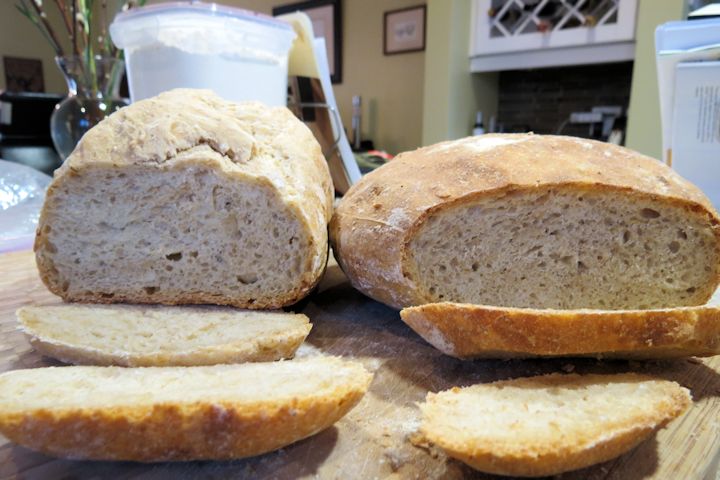 Crumb-wise, they were okay. Nothing exciting, even a little denser than I really wanted. They ended up mostly being eaten with soup or toasted with peanut butter.

In terms of taste: meh. Unexceptional. Edible, and tastier than store-bought, but nothing exciting.

Again, the salt – or lack of it – affected the breads, making them more bland. The loaves didn’t even perk up when toasted, so I figured I needed to up the salt in future loaves, bringing it closer to what the recipes called for (usually about 2% of the flour weight). How much more I need versus how much I can withhold is something I must experiment with more.

And then they got mouldy… albeit three-quarters of the way through each one. It spread very rapidly, too. I hate to waste bread, so they were torn into chunks for the squirrels and birds. 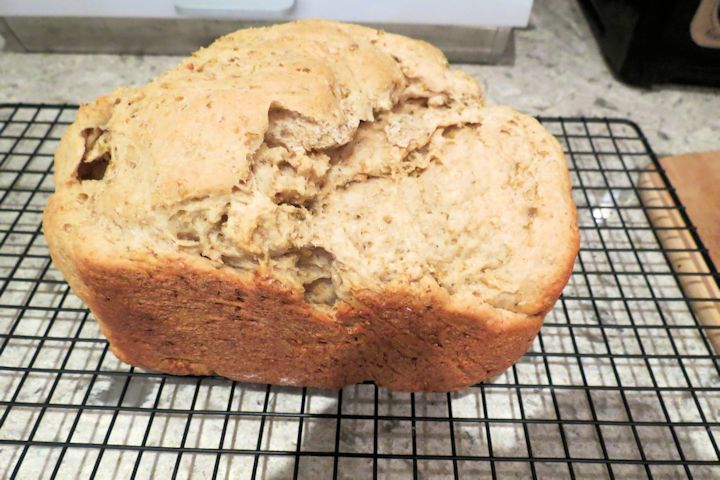 My next effort was a whole wheat loaf made in the machine late last week, using a modified recipe from 300 Best Canadian Bread Machine Recipes, altering it (por supesto) by using some of my Osprey bread flour and some unbleached all-purpose flour.

The result was uninspiring. And ugly.

I love the flavour and texture I get from the K2 flours, but they don’t seem to like to rise much. I haven’t tried any recipes solely using them, but rather add the AP flour to aid the rising and gluten formation. This time it didn’t seem to work terribly well.

I have in the past added diastatic malt powder to the dough to encourage the yeast, but not this time. I also substituted buttermilk for the water and skim milk powder in the recipe. 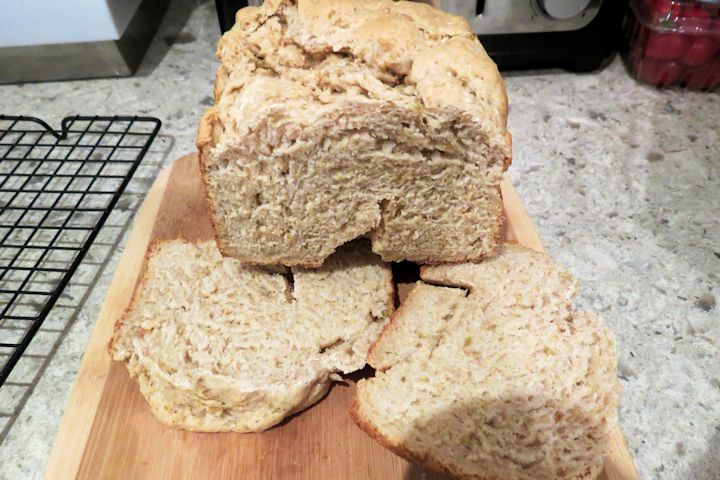 The resulting loaf was edible, but dull. It sopped up the soup well, but didn’t really contribute much on its own. Again, it was less salt than called for in the recipe. Fortunately, it was a small loaf, so it was mostly consumed this past weekend.

I need to try some new ideas to get the best out of this flour (and the K2 Red Fife I have). And to figure out how much malt I might require to ensure a better rise. Does it need added gluten? Have to try that with some of Bob’s Red Mill gluten powder sometime soon.

I also need to do some online research into bread machines and loaf shape. Several of my whole-wheat breads have been misshapen, not the anticipated dome-top. I want to know what that indicates in the recipe or baking time. They were edible, just rather unpleasing to the eye. Any suggestions about this business of loaf shape would be much appreciated. 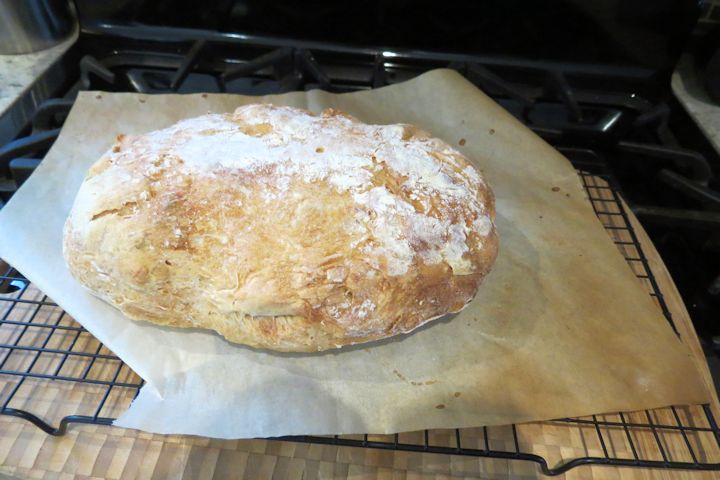 My final loaf (so far; the month is still young!) was a ciabatta-stle bread I tossed together rather quickly. Very basic stuff: flour, water, yeast and salt.

I started with a poolish pre-ferment made Friday night (220g unbleached flour, 200g water, 1/8 tsp yeast). I let it rise overnight then on Saturday morning I added another 300g unbleached AP flour and enough water to bring it to 66% hydration. Plus another 1/8 tsp of yeast and the full 10g salt called for in the recipe (my kitchen scales are iffy about low weights, but they work well enough with 10g).

I did a little folding and stretching, but not as much as I normally do (we had company this weekend, so I spent most of the time talking and playing ukulele with our friend).

I think that might have helped it, although I’m not sure why: folding and stretching, like kneading, helps develop those gluten strands so necessary to let the dough capture the gases during the rise. The “artisan bread in 5 minutes a day” recipes don’t require any folding and stretching, but rather depend on the longer fermentation to develop the gluten strands. I’m guessing the poolish helps with that, too. 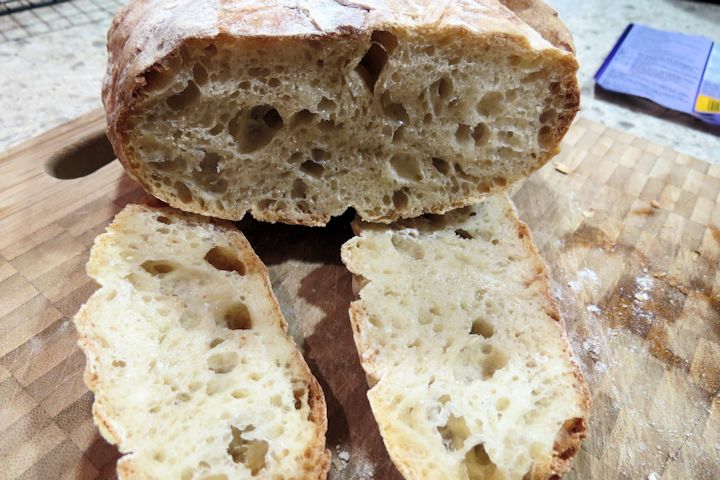 It rose nicely. I put the risen dough into a pre-heated oven (not using the convection setting) at 425F for about 30 minutes.

The result was wonderful. Everything seemed to work well this time around. After a handful of mediocre loaves that were discouraging, this was a nice surprise.

There was a nice oven spring with the dough, and the dough expanded as it should. The crust was good and crisp, but not too much so.

The crumb… well, take a look at those lovely air pockets. They give an old man like me such delight. I’m very happy with this loaf.

That’s the sort of bread I love to make. Chewy but not taffy-like. Great taste too (I just had to sample it last night as soon as it had cooled…): simple but direct. This morning I will try some toasted with just a swipe of margarine (and maybe peanut butter on a second slice).

So two good loaves this month, with three more weeks to go in which I can tinker and experiment. Something to look forward to.

* After some testing and tasting, we use “I Can’t Believe It’s Not Butter” as the best flavour and texture combination of the margarines. We used Olivina for quite some time until we discovered ICBINB (because the grocery store had run out of Olivina at the time). Once we made the switch, we haven’t gone back. Used to get it at the local Freshco but they stopped carrying it (along with several other items we regularly buy), but you can get it at Wal-Mart or another grocery store. We use a small amount of churned butter (generally unsalted) for cooking – but margarine is more convenient because it’s spreadable. However, I may make a move to more butter in future, after reading some articles on the health benefits of butter.