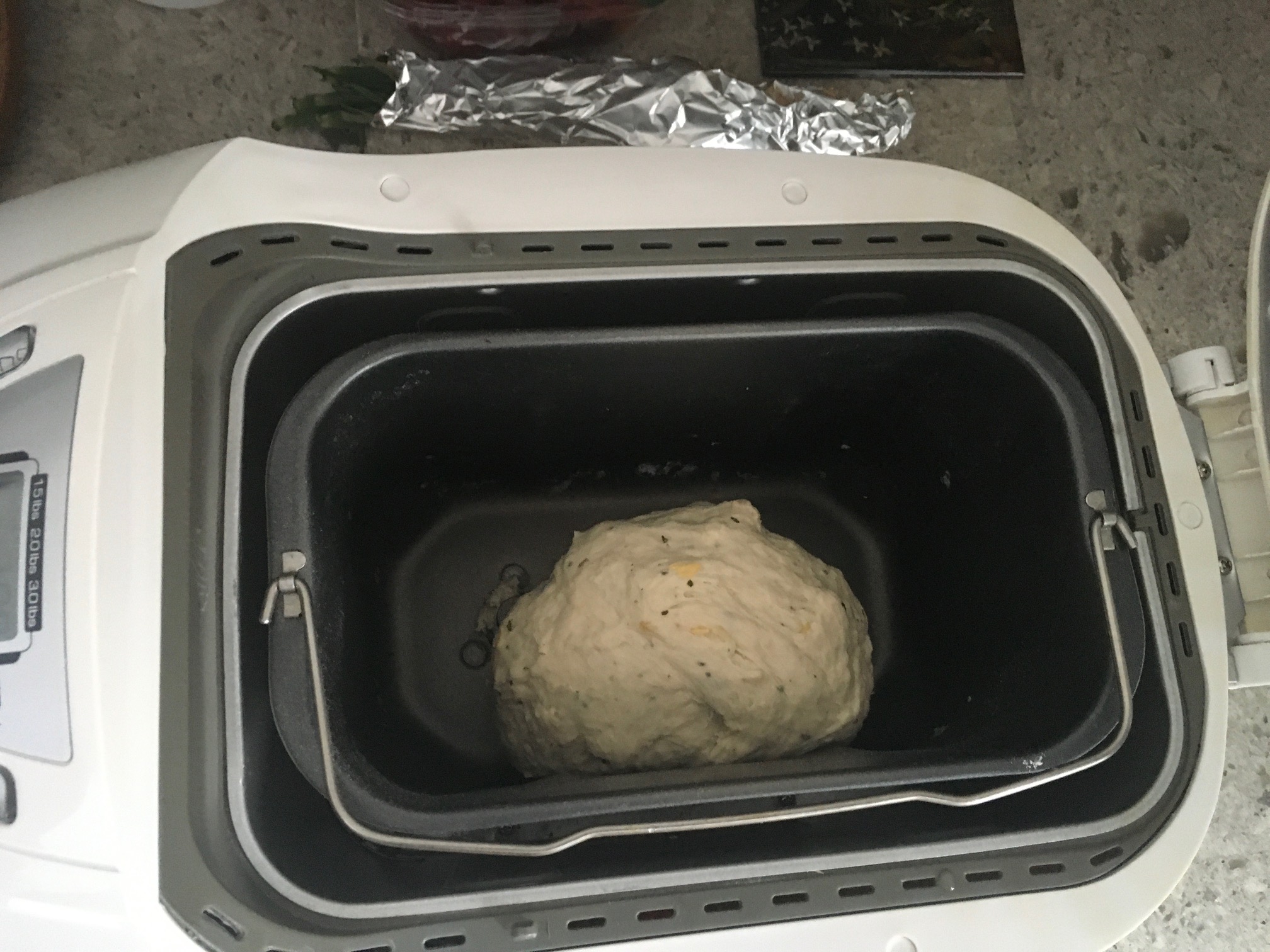 I recently hunted through my cookbooks and online for a simple recipe to make a potato-onion bread in my breadmaker machine. While I found quite a few recipes for potato bread, and others for onion bread, I didn’t find any that merged the two. I collected a lot of recipes and got some good ideas for loaves, but nothing was exactly what I wanted to make. So I decided to tweak a recipe from the 300 Best Canadian Bread Machine Recipes cookbook (by Donna Washburn and heather Butt, Robert Rose inc., Toronto, 2012).

This book is my go-to recipe book for machine-made bread, and has not failed me yet, although because I tend to tweak and tinker, some of the results have been, shall we say, unexpected. But it does take into account that Canadian all-purpose (AP) flour is different than American (and has a greater protein percentage, so doesn’t need additional gluten.

I had earlier copied out ingredient lists from a dozen or more other books and as many websites, most of the recipes for American flour. I entered them into a spreadsheet to compare so I could judge how much to add to the base recipe with the other ingredients as well as compare how they balanced their ingredients. 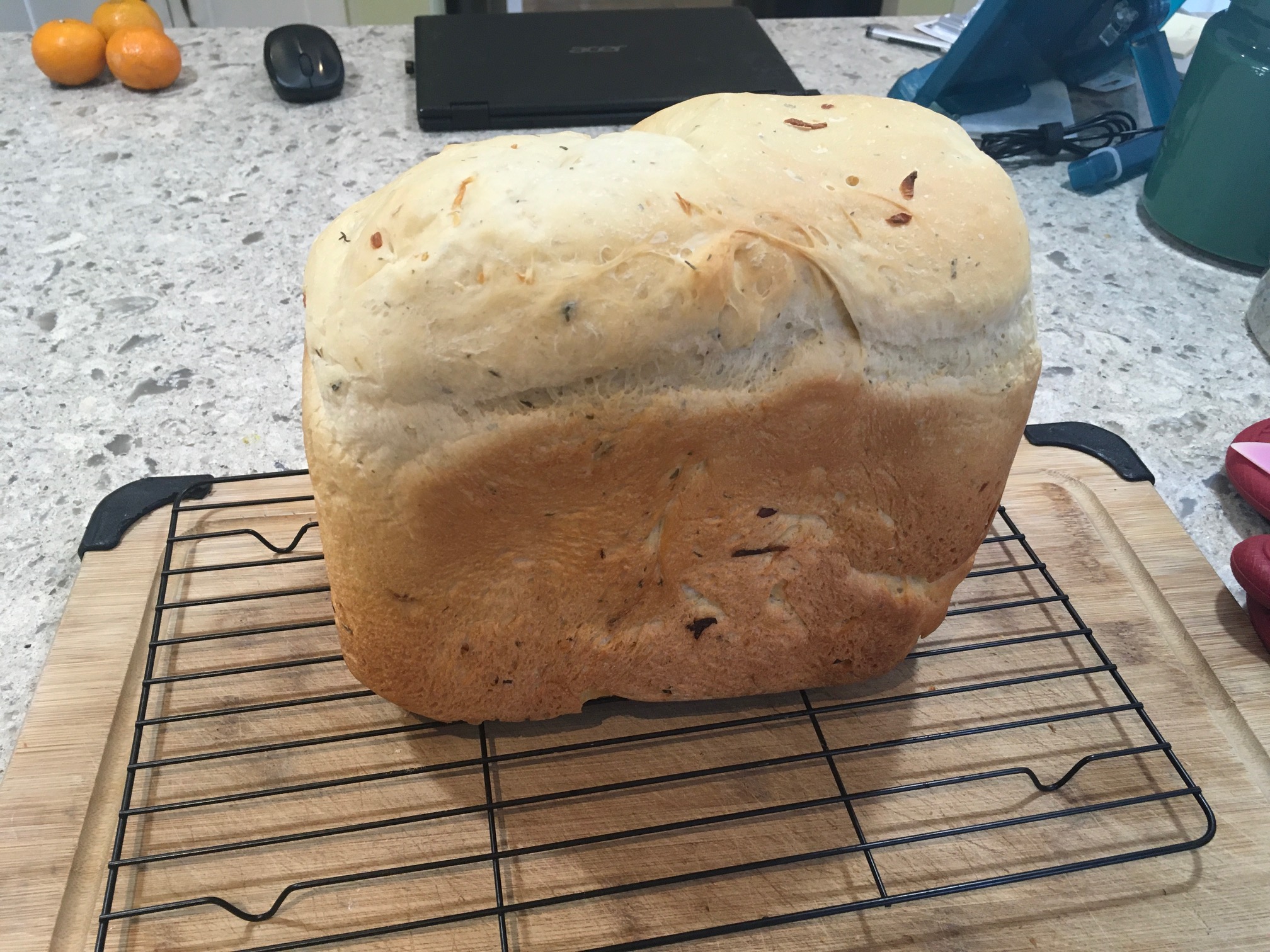 Okay, here are my changes to that recipe. I didn’t use parsley but instead used approx. 1T of tarragon. And I didn’t use chives but used approx. 2T of dried onion flakes (recently bought from Bulk Barn). These were close to the same proportions as the ingredients in the recipe. Tarragon is, however, a much more fragrant herb and the flavour is stronger, so perhaps in future when I make it again, I will use somewhat less (maybe only 1t).

I might try another, somewhat milder herb in future, too. Or maybe none at all. Let the onion speak for itself.

I used melted, salted butter instead of vegetable oil. And I added about 0.5-1t of bread enhancer because I wasn’t 100% sure of the viability of the yeast (its best-before date was Dec. 2022). Given the height of the rise, in retrospect, this seems unnecessary. My flour is the unbleached AP type, which is what I prefer to use for my bread (I have yet to find a higher-protein bread flour that is unbleached).

I also bought some buttermilk powder, but didn’t use it this time. But then, I had some sourdough starter I was tempted to use, too. I tried to stick as closely to the recipe as I could without experimenting too much with other ingredients.

I used 3C of flour rather than 3.25 as the recipe called for. My bread pan is supposed to accommodate 3lb (1.5kg) loaves, but in my experience, 1.5lb with a rise like this one is about as large as it can realistically make. This loaf was millimetres from reaching the cover at the end of the bake. I don’t think more than 3C would work in my Black & Decker machine. Perhaps if I get another bread machine in future with a larger pan and space for rising (assuming I win the lottery…).

The rest of the ingredients I used were the same. I baked the loaf on the 1.5lb size and the light crust setting. I’ve often used the “French bread” cycle for my loaves, but perhaps that was not the best choice for all loaves. Not for this one.

First, a couple of caveats. Yes, I might have used actual mashed potatoes; cooking and preparing them ahead of time and letting them cool, using the water. That would also allow me to use the potato water which contains some additional starch instead of just plain water. I read several descriptions praising bread using instant flakes as reasonable alternatives, so I chose to get some from the local Bulk Barn. This is NOT, by the way, the boxed mashed-potato mix sold on grocery store shelves. That mix includes other ingredients, including salt, sugar, spices, taste-enhancers, and preservatives. I don’t recommend using them in bread; I haven’t found a recipe that uses them.

Before I use real potatoes, I want to read further about how I might use them other than just mashed. I had in mind roasting them instead, looking for a different flavour profile. I bought some powdered potato starch when I was at the local Bulk Barn, but didn’t use it at this time. Maybe in future. 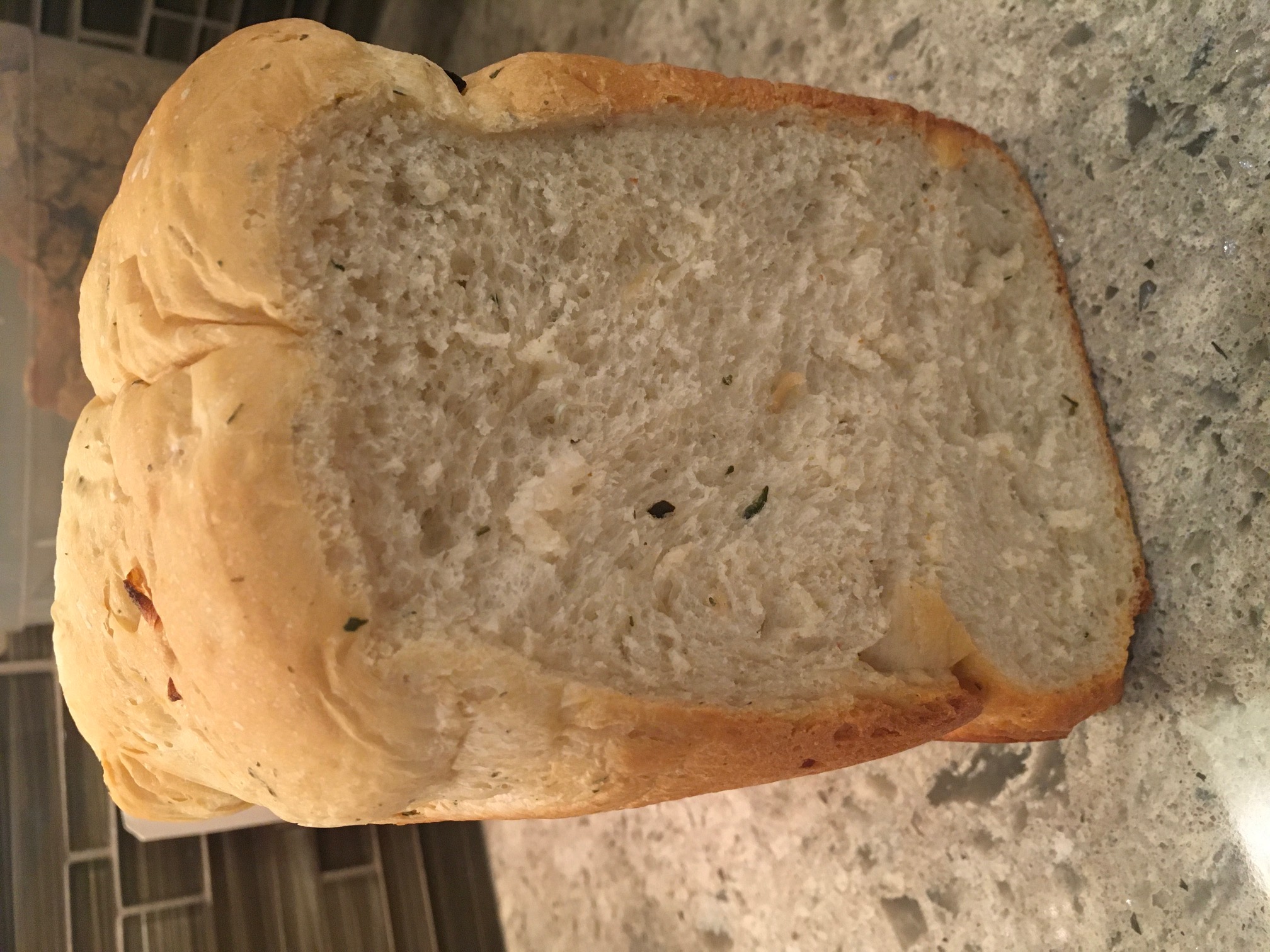 In future, I also think I will cut and fry some very thin slices of potato in butter, and then add them to the top of the dough just before the baking cycle. This could give the loaf some extra texture and some additional flavour. Perhaps thin, roasted slices would suffice instead od fried. Or perhaps a mix of carmelized onion and potato would be better.

Second, I also used dehydrated onion flakes, but in retrospect would have had a more onion flavour has I taken the time to cut and cook (caramelize) a whole onion in butter. The onion comes through quite well with the flakes, but the real onion would be stronger, I think. or maybe a mix of both. The flakes worked, so I will use them again in the future, but perhaps in a different mix.

Another thing I did was to remove the kneading paddles when the kneading cycles were finished, before the baking cycle began. This meant the holes in the bottom of the bread were much smaller than when the paddles are left. It does, however, mean the paddle stems get coated with dough and have to be carefully cleaned after baking. But it’s a small tradeoff for not having to pry the paddles out of the bottom, often leaving much larger holes behind.

The bread was very tasty. And that’s the test, isn’t it? Well, texture and crust matter, too. Both were worthy of the loaf.

The bread baked nicely without any noticeable uncooked areas. It came out with a good crust and a nice crumb (see pictures). The crust in the lower part is crisp and just a bit chewy, but softer in the top where it rose a bit too high. The crumb is soft but firm; good for eating with soups, stews, chili, and likely as the base for beans-on-toast. Whether it works for breakfast toast with my recently-made blueberry jam, I will learn in the next day or two. I am not sure how well the flavour profiles will mix, but I’m curious to try.

Perhaps a medium crust setting might be better for a high-rise loaf; something I will test next time. And, as I mentioned earlier, being a bit more parsimonious with the yeast could be preferred to keep the rise from reaching such a height. And I probably don’t need enhancers, either. But as I’ve often said, baking and cooking are chemistry labs I play in. Tinkering and tweaking are fun.