While I can’t say my collection of pasta making and recipe books is as exhaustive as it could be had I an unlimited amount to spend and equivalent time to read and make pasta, I have garnered a few useful books over the past month. I wanted to share some opinions and comments about those I have collected to date. Also see part two of this review for more titles.

Books on pasta have been around ever since cookbooks themselves. But the art of making pasta at home – outside Italy or by those of Italian descent – seems to have been fringe pastime in North American kitchens, given way to the convenience of store-bought, dried pasta. It is, I believe, slowly gathering momentum. After all, homemade pasta is, like homemade bread, infinitely better than the mass-produced varieties.

Making basic pasta using a home roller isn’t very difficult: mix the dough, let it rest, roll it, cut it. But after you’ve done that once or twice, you really want to expand to other types and doughs with other ingredients. That’s where the cookbooks come in. Unlike some publishing areas, the market for them isn’t saturated (yet).

The history of the pasta machine is somewhat hard to uncover. The first machines to extrude pastas seem to have been created in the 1600s. Back in the late 18th century, Thomas Jefferson had one and experimented with other types. Machines have been manufactured in Italy since around 1800. The common kitchen machine was patented in 1906 by Angelo Vitantonio, an Italian who had immigrated to the USA.

It seems that it wasn’t until the widespread introduction of inexpensive, small, home pasta rollers/cutters in the late 1980s (as far as I can tell – many of them now made in China) that pasta making started to gain attention in North America. And that’s when the first popular-press pasta-making books also appeared. Most of the books reflect only the roller-type machine, not the extruder, which seems a somewhat later invention for home use. One of the things for novices to look for is detail about using a pasta machine (i.e. the optimum thickness of a particular pasta), not simply general statements.

Some of the books reviewed here are for strictly semolina pastas, some for all-purpose flour, others introduce different flours, and some extend to noodles and dumplings (which bypass durum and semolina flours). Pasta can be made from many types of gluten flour, and I recommend trying several. Tastes and textures will vary (as a point of personal preference and dislike of fads, I avoid any book with recipes for gluten-free products).

Few books provide  information on drying and storing homemade pasta, but because many recipes use eggs, this is quite important.

Some general or regional cookbooks include (often limited or brief) instructions on making pasta by hand. These aren’t covered here, nor are the cookbooks which focus solely on using premade or store-bought pasta (with one exception). The rest of these books were purchased specifically to learn about making my own pasta, using a roller (and more recently an extruder) machine, and eventually by hand-rolling.

The three challenges fledgling pasta makers face is 1) finding the appropriate recipes from the myriad of them in print and online, and 2) scaling the recipes for your serving size (in my case, two people with average-to-small appetites). 3) Can I substitute for something I can’t find locally? What about altering a meat-based recipe for a meatless one (or to use, say, fish or chicken instead of beef or pork)? Do the chefs offer suggestions  or alternatives?

I’m still playing with percentages of flours in my mix; I have learned that 140g of flour is about right for we two for most pastas, but too much by about one third for ravioli. Some sauces require a reduction in dough to balance pasta with the additional ingredients. Many of the books have recipes for 4-6 or more. You need to scale the recipes to suit, and that is not always a simple mathematical activity.

END_OF_DOCUMENT_TOKEN_TO_BE_REPLACED 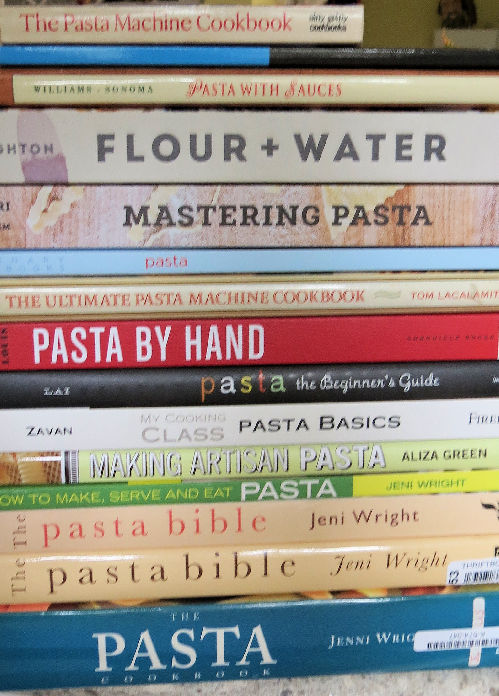 This follows from part one of my book reviews, posted on this blog. Please see that post for the introduction. These, with either the Pasta Bible or Pasta Cookbook (preferred) by Jeni Wright, from the first post, are the recommended books.

I’ve rated the books from A (highest) to E on TRIPDO – technical content (T – what details they offer, whether they use weights and volume measurements or only volume, how much technical information about ingredients is presented, etc.); recipes (R – quality and quantity); imagination (I – what variety of ideas, what variations in items to make, what new or unusual concepts or recipes are contained); presentation (P – attractiveness; how the book looks: its illustrations, layout, typography and design), depth (D – what what breadth of foods and ingredients they cover beyond basic pasta and how exotic are the recipes) and an overall impression (O) also the ‘wow’ factor.

Contributing to the ratings are such things as how many unusual or different ideas are presented; for example whether the recipes explore Asian noodles and dishes use heritage flours, non-Italian cheeses, use unusual or uncommon (for North America) types of pasta, etc.

Keep in mind these are personal and highly subjective, and based on my own rather limited experience making pastas. I’ve also noted whether I think these are for beginner, intermediate or advanced pasta chef.  For me, pasta is a staple in my life, and making my own is like making my own bread: I control the ingredients, the process, the result. While my own experience is limited to a few types, I hope to extend to other types, including  Asian-style noodles, this summer.

END_OF_DOCUMENT_TOKEN_TO_BE_REPLACED 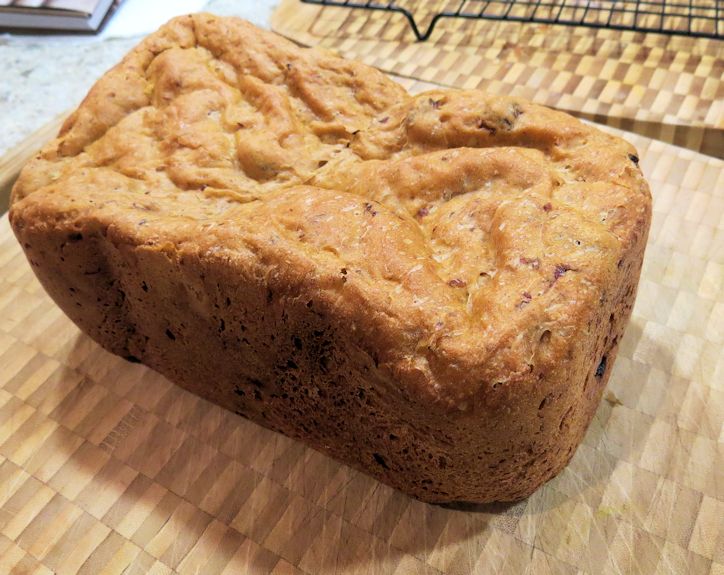 Following up on my desire to make homemade raisin-cinnamon bread for Susan, I spent several hours collecting recipes online and entering their ingredients into a spreadsheet so i could compare them. Quite a range in the amounts of some (like cinnamon and sugar).

Then an Amazon order arrived, which included a 2012 book called 300 Best Canadian Bread Machine Recipes, by Donna Washburn and Heather Butt. Good book, lots of great stuff in it and many ideas to try.

And it’s by far the best bread machine book I’ve encountered. If you get it, be sure to read the introduction – these ladies know their stuff.

I decided to go with that book’s recipe, first, rather than cobble my own together. After all, the book is designed for Canadian bakers. Our flour is somewhat different from American flour (although some types are similar), so it’s nice to be able to bake something without fretting over adjustments to an American recipe.*

300BCBMR has two recipes for cinnamon-raisin bread I wanted to try: a basic one in four sizes (1.5, 2, 2.5 and 3 lb loaves – fifty of their breads have the four sizes listed; the rest one or two), and another called “Grandma’s Raisin Cinnamon Bread,” which includes an egg in the ingredients, and a slightly different mix of the rest. It also lists a 1.5 and 2 lb recipe for that variation. I decided to start with the basic, small size-loaf (10-12 slices), medium crust, sweet bread setting.

Of course, I can’t resist tinkering. Mad scientist runs through my veins. I should be a virologist.** 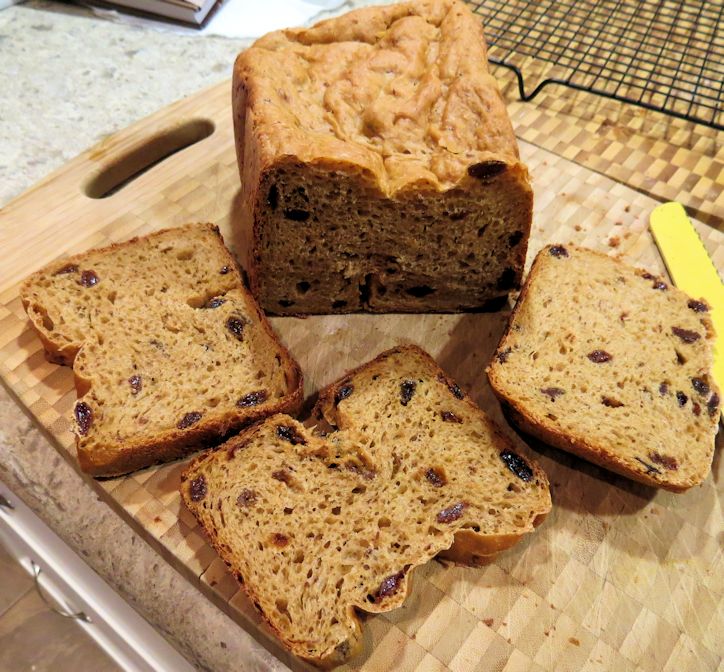 I changed the sugar called-for in the recipe to molasses (I pondered using agave syrup, but decided to save that option for a future loaf). Here I had to guess a bit: is the sugar content in 2 Tbs of granulated sugar the same as that in molasses? (No, actually, molasses has more, i found out later, but it also adds gobs of flavour).

I traded about 3/4 cup of the total unbleached flour for whole wheat. And I plumped the raisins first – soaked them in warm water before use. Several of the online recipes recommended this.

The molasses darkened the loaf, but otherwise didn’t do much to the taste (I may have used a little less than the sugar it called for – it isn’t as easy to pour or measure or get out of the measuring spoon as granulated sugar).

The whole wheat flour may have contributed to the bizarre shape/rise, and the plumped raisins likely made it a bit too moist for a proper rise. But I’m guessing here. The recipes all call for all-purpose or bread flour. I use unbleached white. I don’t see a difference in ingredients or protein content on the labels, but it could be in the amount of amalyse.

The loaf came out misshapen. The top looked like a 3D map of the Rockies. And one end didn’t fully reach to the end of the pan.

The crumb seems to have fully cooked, but it almost looked as if the top rose too much, then collapsed. I may have used a tad too little yeast, too. The plastic measuring spoons I have generate static, and I found after I added the yeast that some had adhered to the spoon surface. I didn’t think it was enough to make a difference, but it may have been. Note to self: get metal measuring spoons.

Taste is good, although not significantly different from commercial loaves. The crumb is slightly too chewy, according to Susan (I like it though), but the crust is good. I might turn it up to dark crust next time.

The cinnamon is muted and doesn’t come across as strongly as I had hoped. Not a bad bread – edible and very good toasted, but hardly presentable. Not sure if this is the machine or my tweaking.

I am unsure the machine (or any bread machine) can really mix the dough effectively. I’ve thought of removing the dough after the kneading cycle, pausing the machine, then fashioning the dough by hand with a bit of folding and stretching, and returning it to the pan for the rising and baking.

I may try to make a “swirl” bread which incorporates raisins and cinnamon sugar inside. Cinnamon is also a yeast inhibitor, like salt, so you have to be careful when adding it to the dough. This recipe called for 1 tsp, but I would prefer at least double that. Yet the recipe warned against adding more.

Making it by hand, in the oven, with a centre swirl, may be the solution. Use the bread machine for the dough setting only. Or just leave it in the cupboard.

END_OF_DOCUMENT_TOKEN_TO_BE_REPLACED

It is no compliment to be the stupidly idolised master of a dog whose instinct it is to idolise, but it is a very distinct tribute to be chosen as the friend and confidant of a cat.