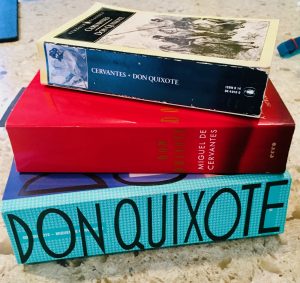 It achieved international fame almost immediately – the first part was translated into English in 1612 and has been translated many times since. The most recent translation was 2012 (Gerald J Davis). In my own library, I have three translations: John Ormsby (1885, my edition was published 2015), J. M. Cohen (1951, in Penguin books 1985) and Edith Grossman (2003 – which achieved bestseller status that year, remarkable for a book 400 years old). A fourth, translated by Montgomery (2006) is on order.

Like several other titles originally written in another language, I own multiple translations to be able to compare them. Beowulf, Gilgamesh, The Prince, Tao Te Ching, Marcus Aurelius’ Meditations, the Analects, Plato’s Dialogues, the poems of Horace, War and Peace, the Bible and Dante’s Divine Comedy are among those books for which I own more than one translation. It’s a trifle clumsy to compare them side-by-side when the book has more than 900 pages, as Don Quixote has, but at least for me it’s usually worth the effort. (okay, I am a trifle obsessive about books… but as obsessions go, it’s harmless, relatively inexpensive, and yet informative and entertaining)

I should note the three editions I own have many similarities, but also significant differences. The Ormsby has the sort of florid 19th century text you find in Dickens and Doyle. But the edition has been artistically enhanced with coloured text (for Quixote’s dialogue) and modern photographs (it seems to have begun as a Kickstarter campaign). The Cohen is a solid version first translated in 1951 and reprinted as the stock Penguin edition until the recent (2000) translation by John Rutherford replaced it. Grossman’s version came out in 2003 and was both controversial and very popular. Personally I like it the best, and even have the 35-CD audiobook version of it.

With Don Quixote, each translation is affected by not only the chosen wording, but by the source text used for the translation (of which there are several competing choices). Turning late Renaissance Spanish into modern English is a tricky and often cumbersome task, (it is with any Renaissance work, as I’ve written about in my blog on Machiavelli), but it is complicated by the cultural references, idiomatic usage, literary slang, and humour in Cervantes. None of which translate word-for-word into English, especially today.

I suppose modern novels will face similar problems for future readers. It’s difficult enough for readers today to fully appreciate Orwell’s 1984 (written in 1948) without taking a course in Soviet history. Will it be the same for Atwood, Updike, Pynchon and Irving in 50 or 100 years? Will cultural references to Kennedy’s assassination, the Beatles, the opening of the Berlin Wall, 9/11 or Donald “Very Stable Genius” Trump mean anything to readers in a century?

So which translation is the best? As a paper in the Cervantes Society archives notes,

Which is somewhat annoying for me, who wants to just read the book through a translation scholars and critics all agree is the best that might be accomplished for the modern reader. However, as I’ve learned from reading some critical analyses of parts of the translations, while most translations may be acceptable to the lay reader (such as myself), scholars and Cervantes aficionados seem to squabble happily over the minutiae..

As I’ve written in previous blogs, translation is as much an art as a science and it’s sometimes a thin line between choices of literal and metaphorical or idiomatic translation. Imagine someone translating the English phrase “a slim chance” into another language, only to encounter the phrase “fat chance” and struggling to make sense of how they can mean the same thing. Whole books have been written on the meaning of single words or phrases (Machiavelli’s “virtu” for example).

And a single word can mean everything. The prophecy in Isaiah 7:14 about a virgin birth and the messiah is based on the translation of the Hebrew word “alma” which simply means young woman. The word conveys age and gender but not sexual activity (that would require the Hebrew word betulah). Christianity depends on it meaning virgin, however, because without the virgin birth, the Christian messiah has no divinity. One word and everything changes.

And messiah is itself another word of contention because in Hebrew it didn’t mean a deity: it connoted a theocratic function. I digress from Cervantes, but my point is that how you chose to translate or interpret even a single word can have significant consequences to understanding the narrative.

You’ll notice I haven’t really said anything about the book, about the story or about actually reading it (although I am doing so now). Partly because it’s one of those books that’s been analyzed over and over for centuries, so what can I add to that? Everyone probably knows at least the windmill adventure, even if you’ve never read the next 850-plus pages. And also because it’s one of those books you’ve read or you never will. Maybe the 900-plus pages deter you (in fact it’s an easy read and full of short adventures). Maybe it’s because it’s 400 years old (the modern translations make it much easier to read than Chaucer or Shakespeare, however, and surely you’ve read at least some of them! Plus, human emotions, passions and follies haven’t changed since then, despite the changes in technology.).

Maybe because you don’t read books (for which I have no suggested remedy beyond suicide).

Reviewing “Don Quixote” is a fool’s errand: I could sit up here and say it’s a classic and add absolutely nothing to the conversation, or I could stand on my soapbox and call it a piece of detritus, and people would just ignore me for obviously not doing the reading.
This being said, there are some people out there who don’t know just how interesting this book is. It is not good in the “it will change your life” type of way (any book can be that type of book), but good in the sense that this book has 500 years worth of literary history attached to it, and you can sense it on every page. I want to say that this book will suck you in and never let you go, but that sounds too toxic; this book is a friend that you will have for the rest of your life. This book sticks with you.
The book will not make you mad, but it will leave an impression upon your brain. Characters, movements, emotions and befuddlements are all on display in this story, just as they are on display in our lives.
Even better, this book will become more fascinating the more that you think about it. Don Quixote’s madness has been, and will continue to be one of the most contested character flaws out there.

At which I will pour myself a glass of wine and return to my reading Don Quixote while the evening sun still provides enough light for me.