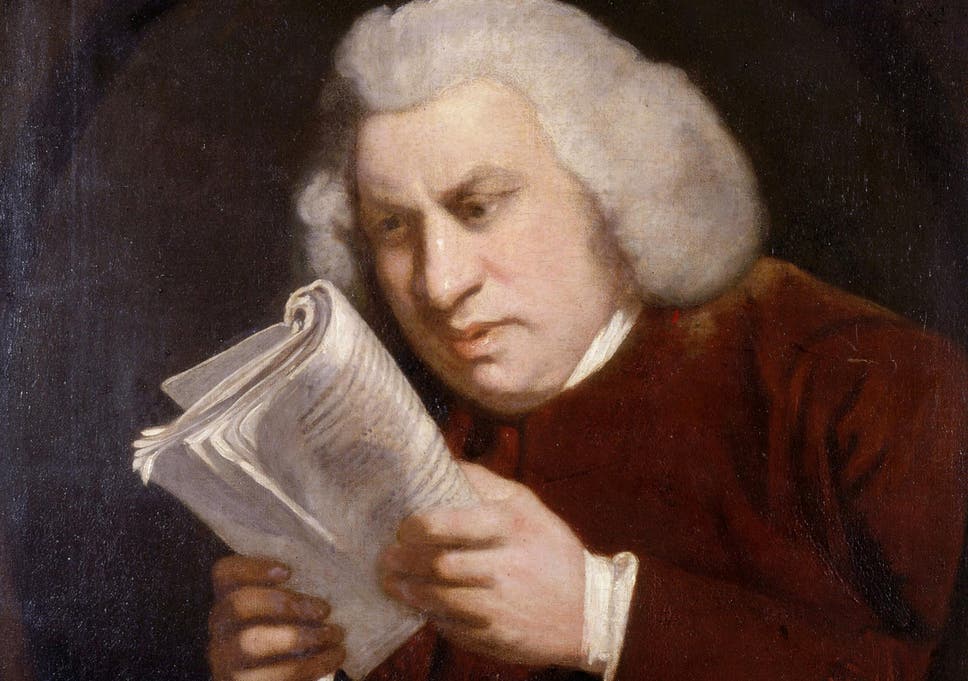 I have recently been reading through the David Crystal anthology of words from Samuel Johnson’s dictionary (Penguin, 2006), attempting to cross-reference it with entries in the Jack Lynch anthology (Levenger Press, 2004), comparing how the two editors chose their selections, and to see how the book designers chose to present them. Yes, I know: reading dictionaries isn’t a common pastime, but if you love words, then you do it.

In part, I’m doing so for the sheer delight of the reading (Johnson’s wit shines through in so many of the entries), and as a measure of the differences in book design, but also with an odd project in mind: The Word-of-the-day From Johnson. I had the notion of transcribing a single word at random every day, and posting it online, on and social media. Not something that seems to have been done before, as far as I can tell.

I’ve previously written about how much I enjoy Johnson’s dictionary, and how I recommend it to anyone who enjoys reading, not merely bibliophiles, logophiles and lexicographers. However, there is no reasonably-priced version of the complete dictionary with its 40,000-plus entries, just various selections. As good as the abridgments are, readers will soon ache, as I do, to read more than the limited number of definitions provided in these.

Sadly, there is at present only a fragmentary resource online, at johnsonsdictionaryonline.com. That site contains almost 10% of the words, leaving curious readers to wonder about the rest. It notes:

So my thought was, “Why not help them out and transcribe a single word every day that could be added to their website?” I might even be able to corral a few friends into contributing. That way, I could get to read more Johnson, share his words with others, while helping what seems a worthy academic cause, and the entire dictionary would be online sooner A winning combination. I sent an email offering to help.

Well, that’s not quite so easily done as said. First, I need a good, clean source to transcribe from. Four editions of the dictionary were published in Johnson’s life, each after the first with corrections or additions. Which to choose as the basis for the transcription? And where to get even one of them?  Not the original, of course, since it would be well outside my limited resources, but rather a reprint, facsimile or scan. The 1979 Arno Press reprint costs at least $300, and even the 1996 Cambridge reprint on CD-ROM is around $200. Both are a bit steep for a retiree, I’m afraid.

The Johnson Dictionary site has a page view version of the first (1755) edition that I can work through, but only clumsily given the one-page-at-a-time interface, and only online. Its pages appear to be JPG, which makes it difficult to scan for OCR, too. I have yet to find a clean, downloadable PDF version that can be accessed for offline work.

Even when I get a source, I have to pick a word, then check the site to make sure it has not already been transcribed. If it isn’t, I will retype the entry and edit it. But that’s not the end. Before it gets published on the dictionary site, it needs to be checked by one of their editors for accuracy and formatted according to the site’s stylesheet. I can insert their CSS code into my blog’s stylesheet and do the formatting work for them, but it adds more time and effort to the process.

Take a look at any single word on the site – look at “air” for an example – see the formatting? Complex, but nicely presented. Note that it references the page in the 1755 edition, the scan of that entry, and uses colour, italics and type size to identify components (you can examine the CSS and code source pages in your browser). Further, there is a concordance at the bottom that lists the sources and attributes with links to a page of cumulative sources. It’s a lot of work to format and present an entry fully.

Here is the actual entry from 1755 in the page view. The old typography is evident; lovely but archaic. Notice the use of the ‘long-s’ that looks like an f? And it becomes a ligature when two are together. That complicates OCR, and a transcriber will have to turn it into a modern ‘s’. Plus the transcriber has to be aware of Johnson’s method for citing sources and retain them. Sometimes he entered a full citation (Milton’s Paradise Lost, b. viii. l. 515), other times just the name and title (Pope’s Pastorals), just an author’s name (Dryden), and even some abbreviations (Shakesp., Dryd. D. Seb., Parad. Regain.).

So it’s a bit of a challenge, but one I’d enjoy taking on. I have some free time to dedicate; it’s educational, it’s fun and it would contribute to something worthwhile. However, in response to my suggestion, I was told,

…we’re working behind the scenes to produce a new online edition, the first stage of which will go “live” in Sept 2020. At that time, you’ll see a complete 1755 transcription, along with new facsimile images, new ancillary material, and improved search capabilities. After that, we’ll work on adding the 1773 edition, an API, and some additional features. All of this is funded by a generous grant from the NEH, plus contributions from The Warren N. and Suzanne B. Cordell Collection of Dictionaries at Indiana State University and the Lexicons of Early Modern English project at the University of Toronto.

Well, that’s good news, and I look forward to the new version, even if I cannot contribute. However, if I decide to continue with the word-a-day project myself, it makes it somewhat easier to select words, since I won’t need to cross-check their entries and conform to their formatting. I can choose those which amuse and delight me, and present them with minimal formatting.

For example, here are two definitions (not formatted as per the site):

Airling n.s. [from air, for gayety.]
A young, light, thoughtless gay person.
Some more there be, slight airlings, will be won
With dogs, and horses, and perhaps a whore.
B. John. Catil.

Alamode adv. [a la mode, Fr.]
According to the fashion: a low word. It is used likewise by the shopkeepers for a kind of thin silken manufacture.

I’ll keep searching for a reasonably good PDF version (or an affordable reproduction) and then decide whether to continue.