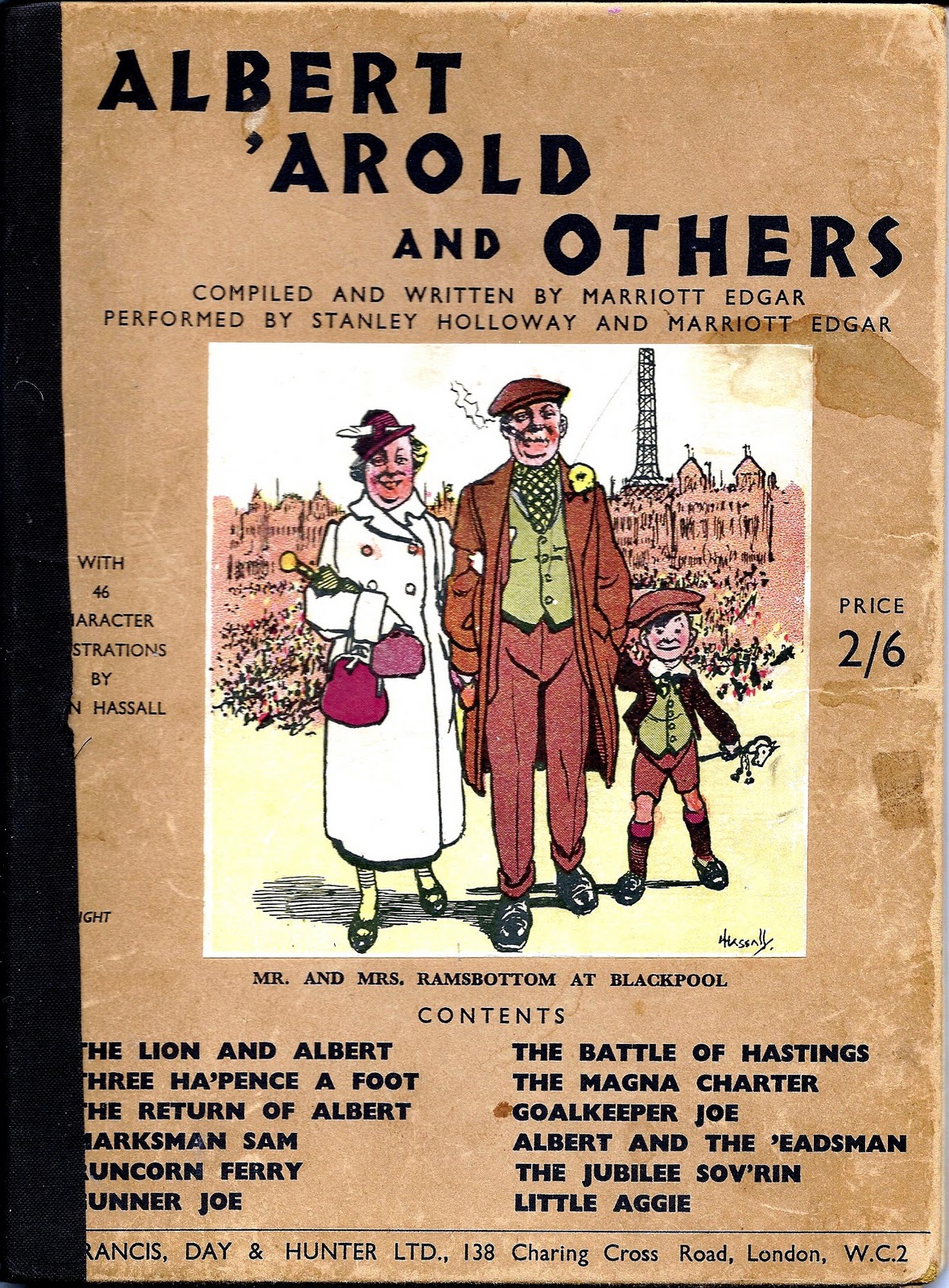 A recent comment on Facebook – “You just can’t resist poking the bear…”* made me remember a poem by Marriott Edgar that I enjoyed as a child in the 1950s: Albert and the Lion. I actually first heard it orally – we had a collection of old 78s and a wind-up gramophone in the basement. Among the musical treasures were several monologues by Stanley Holloway who read this and several other poems about Young Albert, accompanied by a piano that accented his words.

There was a book, too, probably brought from England by my father when he came over in the late 1940s. It had this and several other poems by Marriott. It was published in the 1930s and had great illustrations.I found the cover online at another blogger’s site. The poems were funny, but also darkly comic, like this one:

I’ll tell of the Battle of Hastings,
As happened in days long gone by,
When Duke William became King of England,
And ‘Arold got shot in the eye. Or this one about the headsman and the ghost of Anne Boleyn:

The ‘Eadsman chased Jane round the grass patch
They saw his axe flash in the moon
And seeing as poor lass were ‘eadless
They wondered what what next he would prune.

He suddenly caught sight of Albert
As midnight was on its last chime
As he lifted his axe, father murmered
‘We’ll get the insurance this time.’ I may still have a copy of Edgar’s wonderful book in my own collection. Not sure what became of it, but it was well-read even when I first found it. I remember it well. remember the feel of it, how the pages smelled, how it folded in my hands as I sat on the couch and read it. It had the English price on the cover, which was a number very odd to a boy raised in Canada. Just added to the magic.

My father had brought an odd assortment of books with him, including several Boys’ Own Annuals, some dating from the early 1900s. I read them, too, in that basement, while 78 rpm records played. I still have a couple of those Boy’s Own books, upstairs. We used to get parcels at Christmas with Beano and other British comics in them. But I always went back to the Albert poems.

I can still hear Holloway’s Lancashire voice intoning the words as I read them in the book. “Sam, Sam, pick oop tha moosket, Sam,” said Holloway, dryly. My father was from the north, outside Manchester, and probably didn’t find the accent funny or his odd grammar mysterious, but I delighted in it and loved to imitate it.

I loved those recordings. I listened to them over and over and I can still remember many verses and lines. And of course many of these are on YouTube today. Wonderful memories… here’s what I used to hear. Imagine an eight-year-old strutting, pretending to be the characters, making faces like the bemused parents, frowning like the dour magistrate, poking his imaginary stick at the lion:

Here’s the poem itself. The verses that came to mind are in bold:

So, seeking for further amusement
They paid and went into the zoo
Where they’d lions and tigers and cam-els
And old ale and sandwiches too.

So straight ‘way the brave little feller
Not showing a morsel of fear
Took ‘is stick with the’orse’s ‘ead ‘andle
And pushed it in Wallace’s ear!

You could see that the lion didn’t like it
For giving a kind of a roll
He pulled Albert inside the cage with ‘im
And swallowed the little lad… whole!

Then Pa, who had seen the occurrence
And didn’t know what to do next
Said, “Mother! Yon lions ‘et Albert”
And Mother said “Eeh, I am vexed!”

So the manager had to be sent for
He came and he said, “What’s to do?”
Pa said, “Yon lion’s ‘eaten our Albert
And ‘im in his Sunday clothes, too.”

Then Mother said, “Right’s right, young feller
I think it’s a shame and a sin
For a lion to go and eat Albert
And after we’ve paid to come in!”

At that Mother got proper blazing
“And thank you, sir, kindly,” said she
“What waste all our lives raising children
To feed ruddy lions? Not me!”

Memory’s like that.  Sometimes the oddest things happen. I spent a pleasant morning finding this stuff. 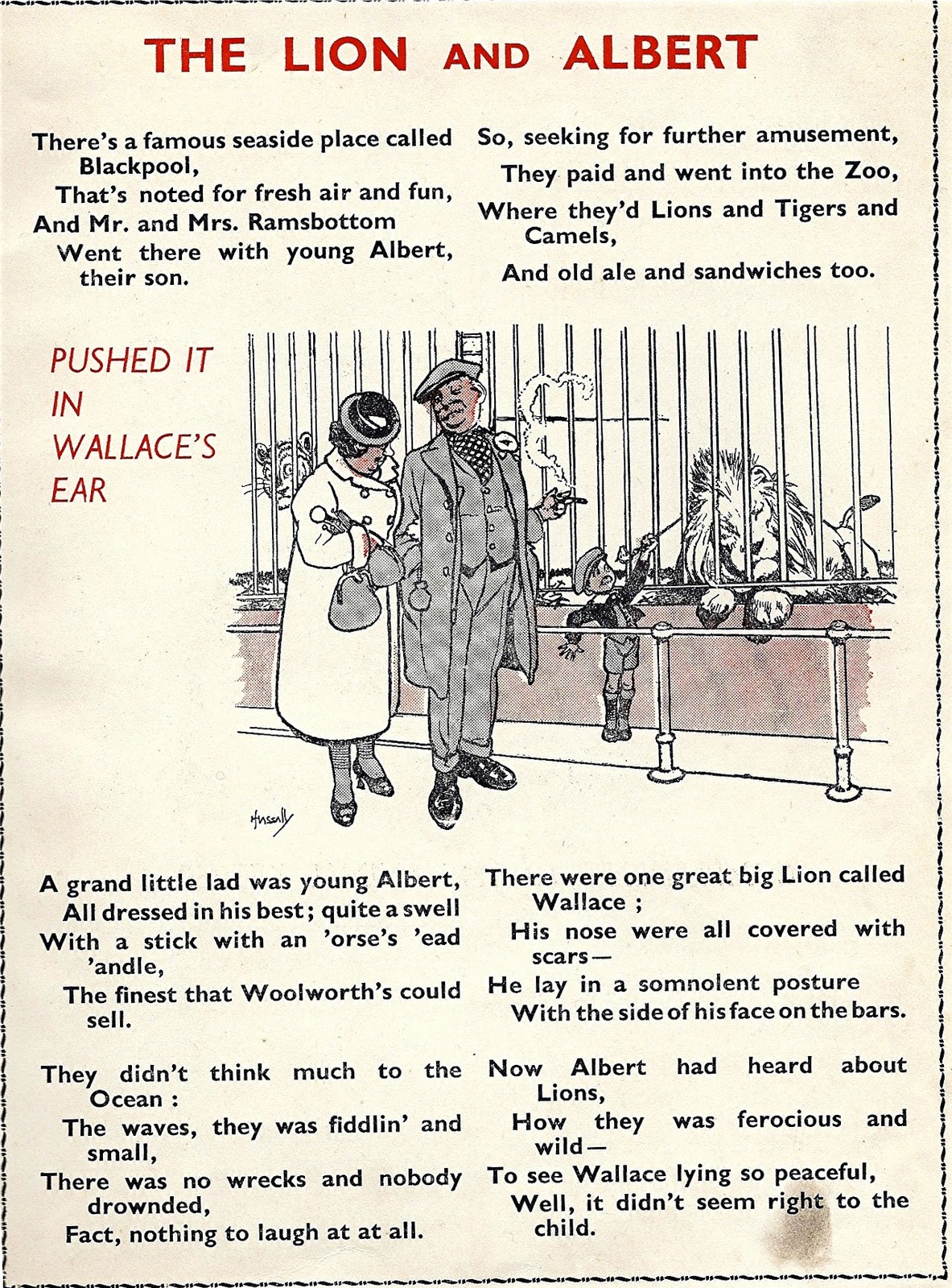 * The comment was not related to the poem, by the way, but rather ab irato; critical comments by another blogger about what I write here.