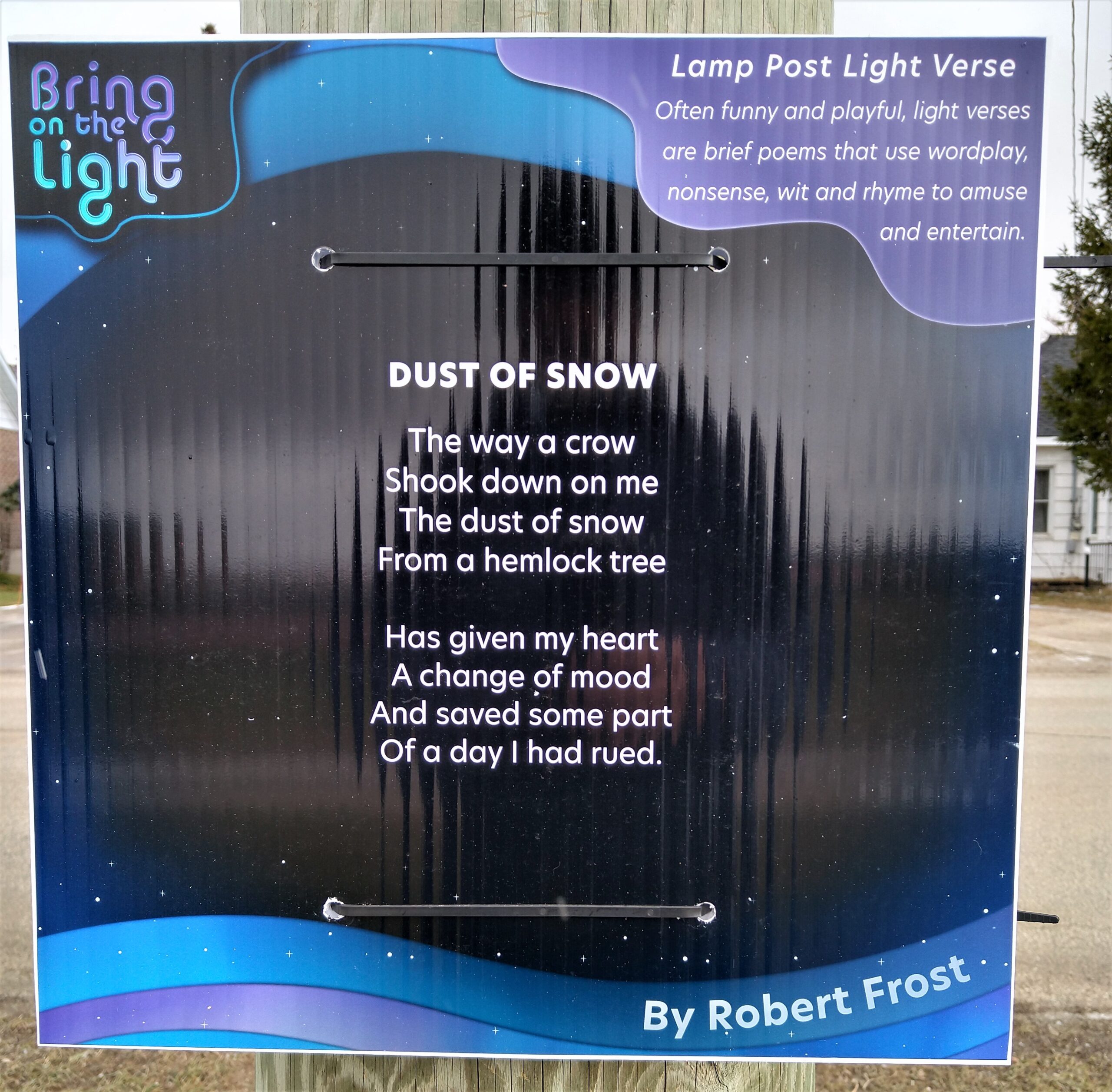 I was disappointed to learn that, after my exposing our mayor for breaking copyright law on his campaign website (by unauthorized publication of copyright material), that the town itself has probably also done so.

I wasn’t surprised that our hypocritical mayor ignored our laws despite being a lawyer himself (look at how often he’s ignored his precious inquiry’s recommendations to avoid apparent conflicts of interest by voting to hire his former employers!), but I was surprised that the town would do so. And that neither of the two lawyers we have on council spotted or questioned it (perhaps they don’t like to read, or never go around town to see such things). 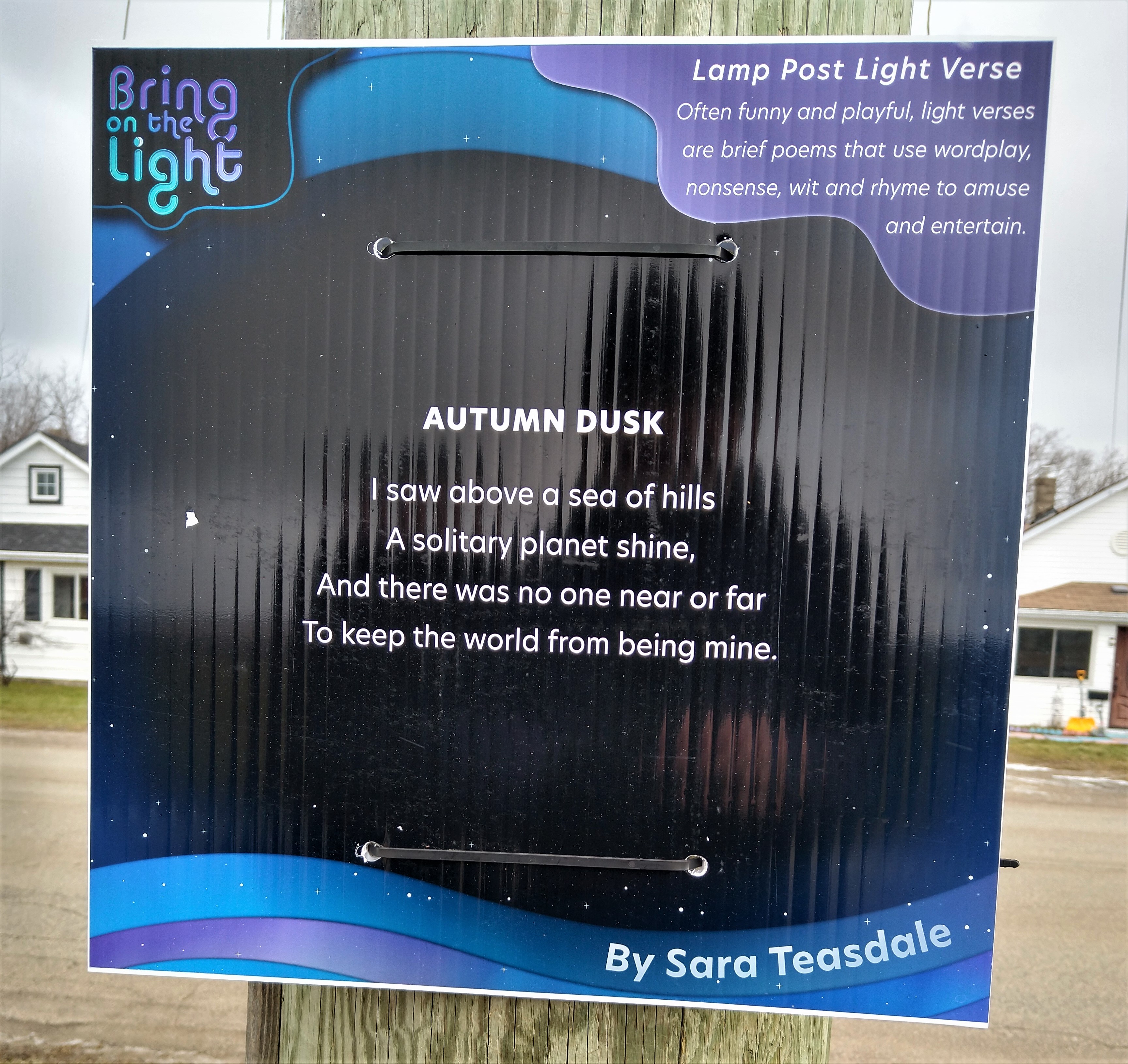 Nor was I surprised that local media again failed to write about something that could embarrass the town and their friends on council (have they written about the mayor’s improper use of copyright material? of course not…).

The potential infraction can be seen on the many “Bring on the Light” posters placed on hydro poles and lampposts  around town. Each has a short poem on it, with the author listed at the bottom. (sidebar: there are printed on non-recyclable plastic and held on by non-recyclable ties. They will end up in a landfill… shouldn’t the town be more environmentally-conscientious?)

While I actually enjoyed reading them (I like poetry, am familiar with many of the authors, and found them delightful, and I applaud their efforts to both educate and entertain us), I was struck by the lack of any information on the posters about copyright or permission granted for use, which I believe are required under Canada’s Copyright Act. So I looked into it.

As the government’s own explanation says: “A poem, painting, musical score, performer’s performance, computer program—all are valuable creations, although perhaps no one can measure their worth. Some works may earn a lot of money in the marketplace, while others earn none at all.” It continues (emphasis added):

Regardless of their merit or commercial value, Canadian law protects all original creative works, provided the conditions set out in the Copyright Act have been met. This means that if you own the copyright to a poem, song or other original work, you have rights that are protected.
Simply put, the Act prohibits others from copying your work without your permission. Its purpose is to protect copyright owners while promoting creativity and the orderly exchange of ideas.

And the University of Alberta explains it thus;

But to confound the issue, there have been court cases to establish fair use (also called user rights and fair dealing) in which there are ways in which copyright material (generally only a portion of it) can be used without violating the law (excerpts, for example, quotes in reviews or studies, and so on). But none of these exceptions, as far as I can see, apply to the town’s use of the poems.

And you can see such fair usage every day on social media. While the definition of fair usage is somewhat ambiguous, it does allow for “criticism, review, and news reporting … research, private study, education, parody, and satire.” I don’t believe any of these apply to the town’s use. From a York University paper on the digital commons:

Go to any social media site and you see the minor use right being exercised all the time, as people take bits of text, audio, or video from anywhere and tweet, re-tweet, and forward them without worry. And for the most part these uses are tolerated, either because copyright owners do not know or care, or because even if they did, they have no right to stop the use because it is a minor use and beyond their power to complain of.

However, later in the 22-page paper, the author notes:

Where a published work is involved, fair dealing is concerned with the purpose of the use, not how the source work was acquired.

Since the town was using the material for, shall we say, educational purposes, it might be able to squeak by under the Act’s core policy for “developing a robustly cultured and intellectual public domain.” As you can see, it’s complicated. Nonetheless, the town should have been more diligent in its examination of the law and should have included the © symbol.

I contacted Dean Collver — director for the town’s Parks, Recreation & Culture (PRC) department — about it, hoping that perhaps I was missing something, that permissions had been obtained and copyright respected. Here’s what he told me:

I have followed up with staff and found that, although there was a discussion regarding rights and an assessment made based on the temporary nature of the installation, no commercial interest stemming from the installation, and author credit being applied to each work, copyright authorization was not received. As our department has always intended to properly support and recognize the value of artists and their works, this was definitely an oversight and we appreciate you bringing it to our attention. On a go forward basis, we will not publicly post works that have not received copyright authorization. Thank you for your input.

Okay, copyright law is not always clear and varies (often wildly) from country to county, so I understand that it may have been a trifle obscure to non-lawyers as to how it applied (commercial interest isn’t a factor).

I am glad the town will update and correct its policies, but I’m also disappointed that no one in these discussions seems to have actually checked the government’s or the many other sites about how copyright works. After all, there are simple explanations on many sites.

I get it that many people often see all online content as public domain, and share it without regard to copyright.* But there’s a big difference between an individual doing it and a government organization doing it. We expect all levels of government to be more scrupulous about what they do. If the same laxity was applied to, say, infrastructure, we’d have bridges and roads collapsing all around us.

I trust the town will do better in the future to respect the rights of authors and artists.

* Mea culpa, I’m guilty of it, myself. Although I attempt to link to an original image rather than copy it (linking has been deemed in court cases as legitimate use, albeit a grey area), sometimes the structure of the web makes it difficult to do so. And sometimes I am provided with an image I assume is the property of the sender, but have sometimes been proven mistaken. I, too, must try harder.

NB. There’s an interesting article on CBC about copyright and copyright extensions (mostly in the USA) which further illustrates the hazy concepts in the law:

Critics like Hiltzik and legal scholars say that copyright creep — the lengthening of copyright terms over the past several decades — does little to protect individual creators while limiting access to cultural artifacts, particularly those that may not have the prominence of Winnie the Pooh.