The first thing I learned – well, not the first but up there, for sure – is that volume measurements are for amateurs. Being an amateur (and expecting to be there for some time yet), I took it on the chin when asking typical neophyte questions about recipes and ingredients.

Might as well have hung a sign around my posts shouting “newbie!” Well, they were gentle with me, but strict. Tough love among bakers.

Good bakers use weights, not volume, they told me in no uncertain terms. No more cups of flour: grams of flour, instead. Good thing I bought a kitchen scale a while back.

Pro bakers throw percentages into the mix and talk offhand about hydration levels and quote recipes like 60-2 bread, or 80-2-2.5. Ouch. That sound is my head exploding.

This makes baking like an exercise in advanced math, you know that class that caused your head to ache in high school? Yeah, like that. Not convinced? Watch this video (I have, a few times):

Got that? Good, there’ll be a test later… (here’s some more study material and part two is here…). And that’s what the real bakers use.

But, you argue, my mother (or father) always used volume and her (his) bread always turned out okay. Well, it’s still okay to use them, but it’s a by-guess-and-by-golly method and you can never be quite sure what you baked with that recipe last time will turn out the same the next.

Like imperial measurements lack the crispness of metric, volume lacks the precision of weight. The pros use weight. And percentages. And if I want to talk with the big kids, I need to be able to speak their language. My baker’s textbook is, by the way, on a UPS truck as I write this. 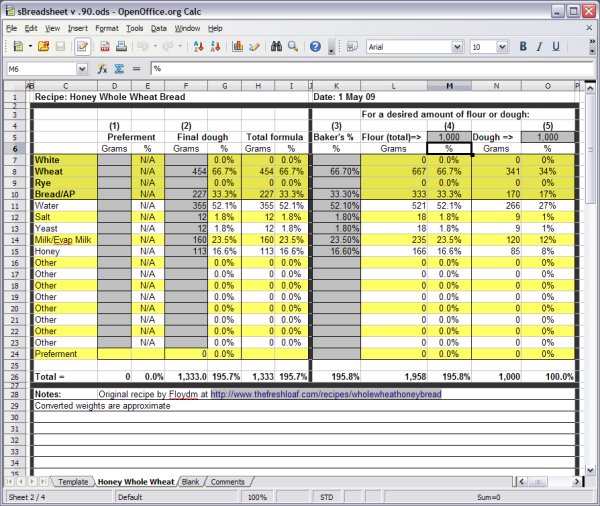 Cups of flour are not a constant. A cup may weigh more or less, depending on how moist it is, what type of flour it is, whether it’s been fluffed or compressed, your technique for filling a cup, … and likely the phase of the moon.

This morning I was up before the sun measuring cups of flour and weighing them so I could try to convert some of my recipes to weights and then percentages.

Susan was so happy to have me commandeer the counter with bags of flour and the scale just when she wanted to make her lunch… ever get the evil eye from your spouse? Let’s save that for another post, shall we?

And then I had to go online compare my weights against those others have come up with (tip: wash hands before typing….). So here’s what I came up with:

I didn’t weigh the two flours I got from the K2 Mill last Sunday, or the bag of PC organic flour. Didn’t want to unseal anything yet, until I’m ready to bake (I started a levain today, however… after all, I had the flour on the counter; might as well use it…).* 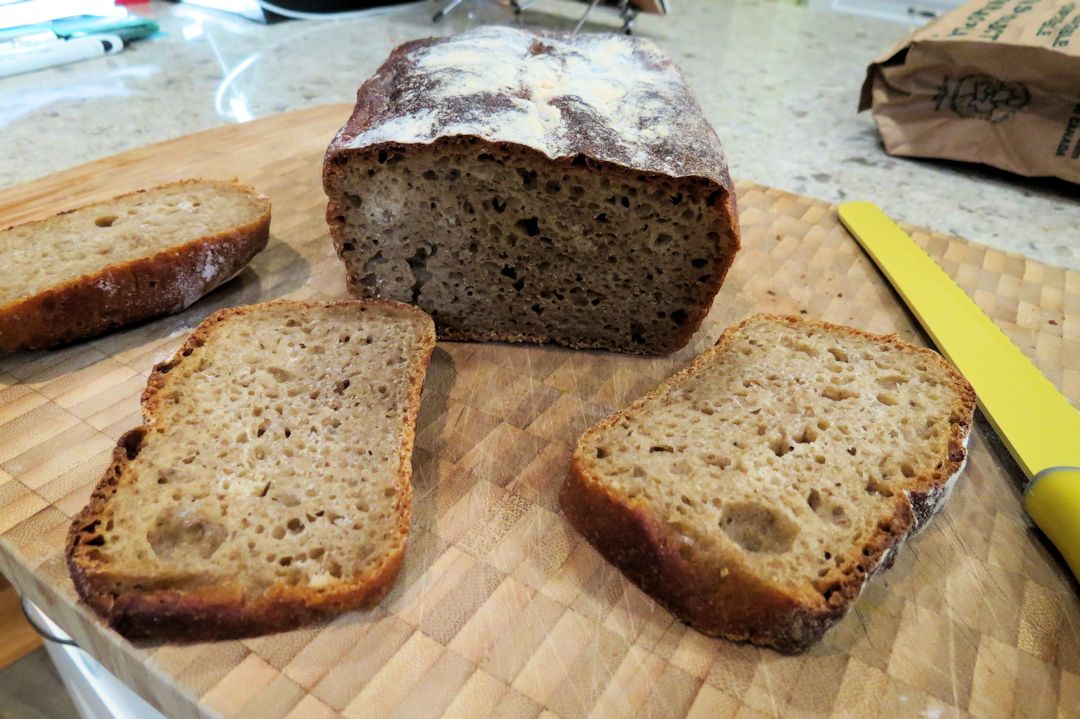 Not sure if those figures make sense, given what I’ve read. King Arthur Flour tells me a cup of unbleached flour should weigh 4 .25 ounces. Hmmm. Dig out the calculator and convert that to grams: multiply ounces by 28.3495… 120.48 grams. Call it 121. Wow. There’s a huge difference between that and my weight.

Which is why recipes by weight rule. No uncertainty.

So let’s look at the basic no-knead/artisan bread ingredients I’ve been using  (more or less), which uses volume measurements. The recipe is taken from Bread Experience which owes its source to Artisan Bread in Five Minutes a Day. Let’s do some calculations. Got your calculator handy?

Here’s what the recipe calls for to make 1 .5 lb loaf:

Which I covert to (I’m going to use 160g/cup which is my own measurement):

So, if I’m doing this correctly, that is, in bakers’ percentages:

Which seems the hydration is somewhere between French bread and ciabatta, according to the table at the top. Salt’s about right. The yeast might be a bit high, though. Percentages give new insights into the outcome. Ah, my eyes are opening to the potential here.

The Serious Eats site suggests a 70% hydration, 1.5% salt and 1% yeast ratio. See how percentages are an advantage? I can do some math and come out with ingredient weights based his recipe and the same amount of flour:

So there it is. Weights and percentages. No more cups and tablespoons. Well, of course there are always recipes by volume, but from now on, I convert them first and start making notes. Or buy cookbooks with recipes based on weight, and save myself the headache.

* 250g Red Fife flour, 250g unbleached white flour, 500g water. Might have done better to reduce that by half, but I used a recipe I found on YouTube so I stuck to those amounts. The photo is of my rye bread from last week, and nothing really to do with the post, just my latest bread. Tasty, and dense.