Legend has it that, in the Qing Dynasty, Qianlong (1711-1799 CE), the grandson of the Emperor Kangxi, went on a holiday to the West Lake district, in the Hangzhou area of Zhejiang province, China. He stopped at the Hu Gong Temple, nestled under the Lion Peak Mountain (Shi Feng Shan). There, he was presented by the monks with a cup of green tea made from the temple’s own tea bushes.

He was so impressed with the tea that, when he became Emperor himself, Qianlong gave these 18 tea bushes special imperial status and the tea became “Gong Cha,” or Imperial tea. Those trees are still living and, according to Wikipedia, “the tea they produce is auctioned annually for more money per gram than gold.”

The green tea he sipped is known as Longjing or Lung Ching – “Dragon Well” in English, named after an eponymous well located in the nearby village, itself with an interesting story to tell.

There are other parts to this legend:

Since the first cup of tea served, he was very impressed with its beautiful appearance, elegant fragrance and mellow taste. The monk who served the tea, brought him to the tea garden, where 18 tea bushes were planted. Being enamored with the work of women picking the tea, Emperor even decided to try it by himself.

When the Emperor was enjoying gathering the tea leaves, urgent news came saying that his mother, the Empress Dowager fell sick and asked for his immediate return to the palace. When the Emperor came to see his sick Queen Mother, the aroma of tea leaves, which he kept in his pocket, attracted her attention. At once, he served the tea to her, and the Queen Mother fell in love with its amazing taste and flavor. After drinking tea for a few days, the Queen Mother was cured. The Emperor was so grateful to the tea that he granted the 18 tea trees under the Lion Peak Mountain the name of the Imperial Tea Tree. Since then, Dragon Well tea became a tribute tea to Chinese emperors.

Gabriella Lombardi, writing in The Tea Sommelier, says it is the “most famous of all Chinese teas.” (I found this wonderful, beautifully illustrated book on sale at Indigo, Eaton Centre, last weekend; a real steal for anyone interested in tea.)

But the tea from that region was known long before Qianlong. It was mentioned by Lu Yu (733-804 CE) in his famous “The Classic of Tea.”

There were other books about tea produced in China after Lu Yu, such as Zhu Quan’s Manual of Tea from the late 14th century CE. Tea drinking in China is itself at least 2,000 years old, and the oldest tea trees are about 1,700 years old.

Another legend says the tea plants are “watered by rain from a local dragon.”

Dragon Well Tea flourishes in the mountainous area where mild climate and plentiful rainfall are plentiful year-round. Around West Lake, Shifeng Peak, Longjing Village, Yunxi Mountain, Hupao and Meijiawu Region offer such prime conditions. The history of planting tea trees is rather long in these areas, as the tea sage Lu Yu mentioned in his Book of Tea. The teas grown in these areas were called Shi, Long, Yun, Hu and Mei respectively in the past. Now, with an increase in production, it is generally classified into Xihu (West Lake) Longjing Tea, Qiantang Longjing Tea and Yuezhou Longjing Tea, among which the Xihu Longjing Tea is the best.

Dragon Well has a more recent historical significance: it was the tea presented as a gift to President Richard Nixon during his famous trip to China.

I mention Ten Ren because they have a small tea shop on Dundas Street West, where I have bought several of their loose-leaf and bagged products over many years. My latest trip netted a small bag (150g) of Dragon Well, priced in the middle between the highest quality ($98 for the same amount) and lowest ($14) the store had to offer.

The Tea Store tells us:

The tea is famous worldwide for its “four wonders” – emerald green color, aromatic flavor, sweet taste and beautiful appearance. Delicately sweet, deep, smooth, orchid like taste and aroma, with a refreshing meadow-like fragrance, Dragon Well tea can be very expensive, and sometimes tea lovers pay even more than £1000 per 500 gr. 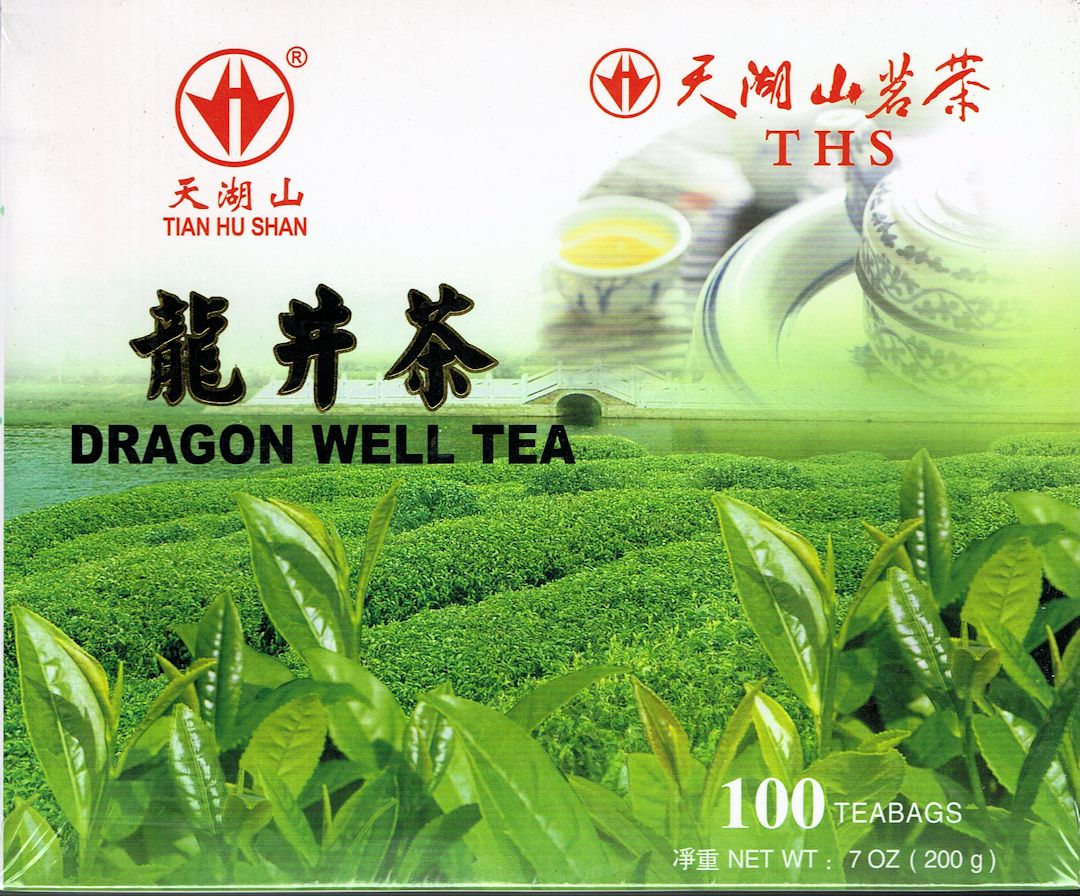 That’s quite a bit more than I would (or could) pay, but I’m not a rich connoisseur, merely a modest aficionado. That Longjng would be authentic, but tea plants using that name is apparently grown in other areas of China, although those leaves are not considered the best. I can only hope that the Ten Ren tea I recently bought is, if not at the top of that ladder, at least on the rungs, and from the appropriate district.

The Tea Sommelier says the very best Longjing is from the hillsides around Xi Ho. It also notes that the real tea has a PGI status – the equivalent of a Denomination of Origin or NOM – and only the teas from a small area (about 168 sq. km) can receive that official status. That small size means the output of tea from the region is smaller than the demand for it. How much of it actually reaches Canada I cannot say. 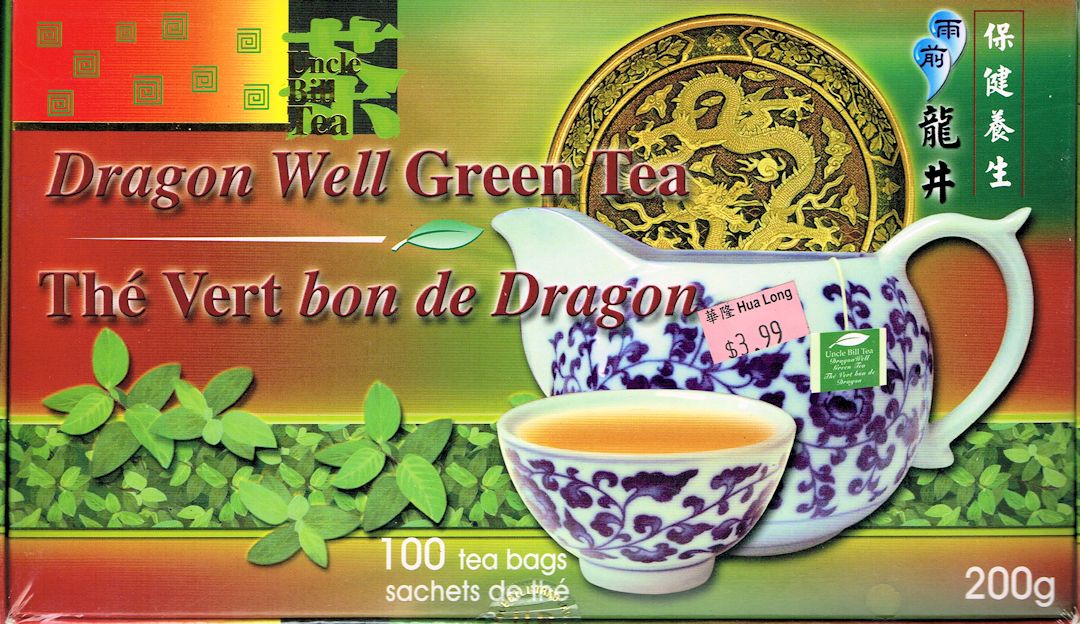 I have purchased what has been labelled as Dragonwell tea locally (small boxes of bags) for a few dollars a box, and others in Asian grocery stores in Toronto for quite a modest price. However, these are not the superior varieties (price alone so indicates) and may even be fake – imitators of this tea abound, and often ordinary green tea, even inferior green tea, gets packaged as Longjing and sold to unsuspecting buyers (like myself).

I often visit Asian markets when in Toronto and scan the shelves for varieties of tea I’ve never tried (I recently found a Korean green tea, too). I buy many boxes (my optimism for the result sometimes outstrips the quality, sad to say). Unfortunately, since I don’t read or speak any form of Chinese, I am limited to what is labelled in English, so I can seldom verify if the teas I buy have a PGI label. Certainly none of the boxes shown here have anything on them to suggest such regional authenticity.

Well, I still delight in trying all these teas, regardless of whether they are the authentic Longjing. Some have proven worth the trip (most Ten Ren teas, for example, have been excellent, especially the whole-leaf bags).

And as I sit here, sipping my green tea which may or not have been plucked from a tree in the West Lake district of a far-away province in China, I can still enjoy the beauty of the drink, and partake in the  legend that surrounds it. I lift my cup to two millennia of Chinese culture and civilization symbolized in that green liquid.

In fact, a cup of tea – any tea, although I prefer green tea – can help us enjoy a contemplative moment, a chance to sit back and reflect. What would Qianlong have thought had he known that his tea would be pondered upon half-a-world away, many, many generations later?

I sip slowly my Dragon Well and think on the millennia-long journey that brought it from a small, rural temple to a modern grocery store in a bustling metropolis, and then on to a small town on the edge of a beautiful lake. A lake that contributes some of Canada’s best drinking water to the making of my teas. Water is important to the process, as Jiang Tea reminds us:

Tradition has it that to achieve the best taste from Longjing, water from the Dreaming of the Tiger Spring, a famous spring in Hangzhou, is to be used. Water is boiled then cooled to about 80 degrees Celsius before being used to brew the tea leaves. It is usual to use ceramic or glass to brew Longjing tea (minerals in porous earthenware such as Zisha may disrupt the taste of the tea.)

Tea has so much to teach us, and I am only a few footsteps on a journey that is many miles long. Thankfully, the journey is not a hard one and has many stops along the way to stop and enjoy.

2 Replies to “A Cup of Dragon Well”

“It will be twice the disgrace to him who, although born a prince, loses his state by his lack of wisdom or his incompetence.”