Did you know there is a card game played in Japan at the New Year, called uta-garuta, where 100 cards have a full poem on each — traditionally taken from their classical poets — and another 100 have just the final line. Players take turn reading the poem from the deck, while the others race to find its concluding line from the cards with the final lines. I didn’t until I read about it on page 111 of The Penguin Classics Book, by Henry Eliot.

It’s the sort of delightful, fact-and-fun-filled book that encourages browsing to uncover this and so many other tidbits of information about books, their authors, and their culture. I recently added Eliot’s  book to my own library and have spent many hours cheerfully rambling through it. Every page seems to have something to learn and enjoy. It’s the sort of coffee-table-toilet reading book that can suck you in for hours.

The Penguin Classics Book covers all the greatest works of fiction, poetry, drama, history, and philosophy in between, this reader’s companion encompasses 500 authors, 1,200 books, and 4,000 years of world literature, from ancient Mesopotamia to World War I. Filled with stories of the series’ UK origin, author biographies, short book summaries and recommendations, and illustrated with historic Penguin Classic covers, The Penguin Classics Book is an entertaining historic look at the earliest chapters of the world’s best-known Classics publisher.

The author, Henry Eliot is, according to the same site, “Creative Editor of Penguin Classics.” The book is an ambitious, well-designed look at the history of one of the world’s most famous publishing imprints: Penguin Classics. The line began in 1946 as a means to make classic literature available to the general public at an affordable price. The books quickly became favourites both for booksellers and academics, and provided a publishing outlet for translators and editors unlike any seen before.

The first title published in the series was a translation of Homer’s Odyssey, and in its first decade, the line had a mere 60 titles to its name. Today, it has some 1,200 titles, covering literature from the Babylonian Gilgamesh epic to modern, international authors. And everything in between: the line has plenty of English-speaking authors, but also translations of works originally written in French, Russian, Italian, Korean, Japanese, Persian, Norse, Vietnamese, Hebrew, Old English, Greek, Latin, and many more languages. And not just literature: there is poetry, philosophy, biography, history, plays, memoirs, folk tales, and scripture. Four millennia of the written word is here.

For those of us who love reading, this series has provided a wonderful opportunity to open windows into other cultures, other communities. And Eliot’s book is like the exquisite aperitif before the meal.

Eliot’s book draws a somewhat fuzzy line at World War I (including some authors who wrote later, but also missing some like Don Marquis and Marcel Proust who wrote during that period) , which I found a trifle disappointing, since there have been many modern books published in the line since then. I live in hope that a second volume, following from the chronology of the first, will be published. But as I wait, this volume engages me.

Included in its 475 pages are hundreds of Penguin covers, all photographed in colour, to document the graphic evolution of the line. Plus, he also provides a gallery of covers from “The Vaults” – Penguin Classics no longer in print. I was bemused to see how many of these I still have on my shelf (I have many, many Penguin titles, although not all are in the Classics line; my oldest Penguin titles date to the 1950s, and my newest to within a year or two or this writing). 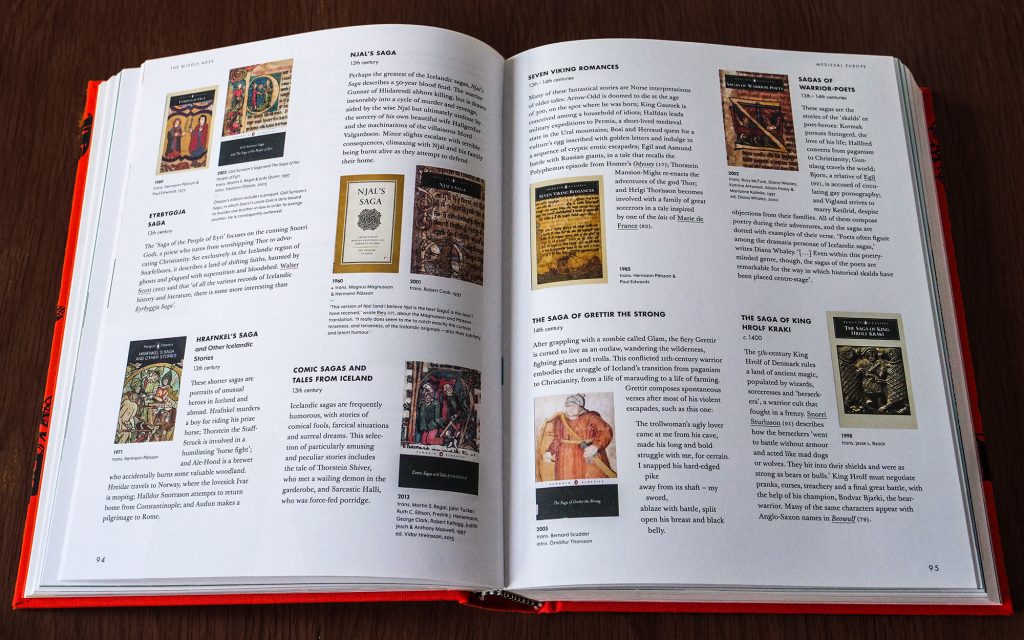 In an interview with Elizabeth Oliver, Eliot described the process of selecting his content:

For each description, I looked for something surprising and irresistible: a hook that would catch people’s attention. My primary source was the relevant Penguin Classics edition, the blurb, the introduction, and the text itself. Sometimes I needed to do more digging, and consulted reference books, including The Oxford Companion to English Literature. If I really drew a blank, I dived into the internet, and went down rabbit holes until I found a lead. ­

What the imprint has also provided is a wealth of easily-accessible scholarly commentary and annotations on the many books in the list. Each comes with an introduction that explains and explores the authors and their world, as well as discussions on the art of translation. Many have foot- or end-notes and annotations to explain context and translations. For these alone the series is worth buying.

Many of my introductions to world literature came via Penguin paperbacks in the late 1960s and early ’70s when I worked for (and had my own) bookstores. I remember “The World’s Biggest Bookstore” had a massive sale of Penguin books in the mid-1980s at very discounted prices and I carted home bags of them. Many of which still sit on my bookshelves, as do the others I bought although the older titles are aging and in a few the binding is coming unglued.

I still cherish my old copies of the poetry of Li Po, Tu Fu, and Wang Wei; books from which I learned about the rich tradition of classical Chinese poetry. And Basho’s Narrow Road to the Deep North, which introduced me to Japanese forms at a time I was learning about Zen and Buddhism. I first read the Gilgamesh epic in a Penguin edition — and learned more about it from the updated, recent Penguin translation. As I look through Eliot’s book, I can point to titles I have on my shelves, and others I’ve read and since have given, lent, or simply lost.

But it’s not simply nostalgia that draws me in: Eliot’s comments about the books and their authors rekindles in me a keenness to read them, to re-open read titles, and to explore those of which I am unfamiliar. All those titles by H. G. Wells, for example — I’ve read his scifi classics, but there are so many unfamiliar to me. That’s true of a surprising number of authors I knew and have read. And authors I didn’t know — too many to name them all, but Gertrude Bell, Baltasar Gracian, Heinrich von Kleist, Selma Langerlof, Mary Antin, Charlotte Perkins Gilman, and so many, many others. So little time, so much to read.

It’s like one of those restaurant menus with a plethora of delicious-sounding choices, that you can’t even begin to choose what to order and end up picking things from all over just to satisfy your curiosity. Or perhaps it’s a catalogue of birthday gifts I want to buy for myself (assuming I had any room left in which to store them). So many titles…

This is a wonderful book for anyone who loves books and reading.